Jean Pascal: Sergey Kovalev boxed Hopkins, let’s see if he can box me 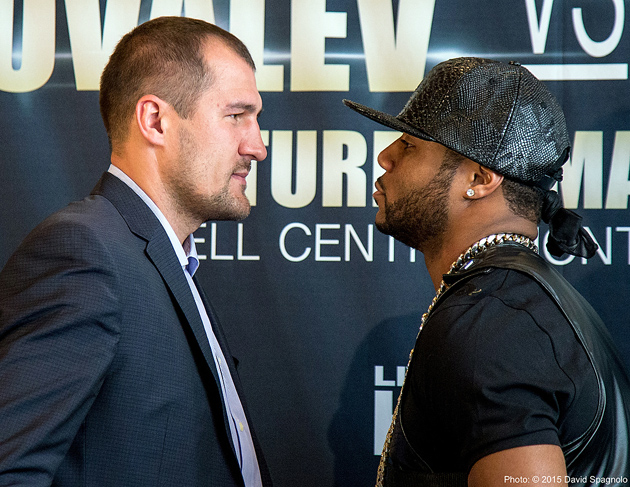 NEW YORK CITY – At an afternoon press conference, where according to promoter Kathy Duva, “everyone was invited,” Main Events and Interbox announced the March 14 light heavyweight showdown between IBF/WBO/WBA titleholder Sergey Kovalev and former RING/WBC champ Jean Pascal at the Bell Centre in Montreal live on HBO.

Kovalev (26-0-1, 23 KOs), a Florida-based Russian boxer-puncher, will enter Pascal’s territory in Montreal in front of an expected 20,000 rabid fans who usually reserve Saturdays for Hockey night.

“For me it doesn’t matter where I fight,” said Kovalev, who stopped Ismayl Sillakh in two rounds in Quebec City, Quebec in November 2013. “A true champion will fight anywhere against anyone.”

It was a whirlwind 2014 for Kovalev capped by a career-defining decicion over future hall of famer Bernard Hopkins and the birth of his first child last October.

“I’m ready to start camp in L.A. and train for a difficult fight,” said Kovalev.

Pascal (29-2-1, 17 KOs), who fought Hopkins to a draw in 2010 and then lost the rematch the following year, says the Hopkins who fought Kovalev in Atlantic City in November is not the same Hopkins he fought.

“I’m not taking anything away from Kovalev, but Hopkins threw less than 200 punches,” said Pascal.

Pascal will look to box Kovalev rather than brawl with “the Krusher.”

“He showed us he can box (against Hopkins) so let’s see him box against me,” added Pascal.

Kovalev earned his “Krusher” nickname by knocking out all but three of the 26 fighters he defeated.

“Sergey is one of the most electrifying performers I have ever worked with,” said Duva as she presented the fighter with a gold ring commemorating his win of the WBA and IBF titles from Hopkins.