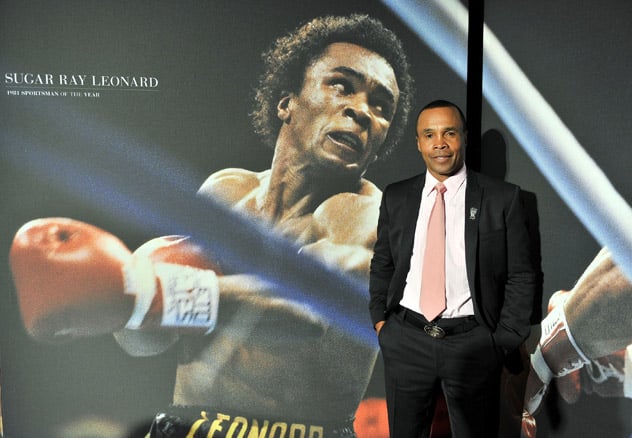 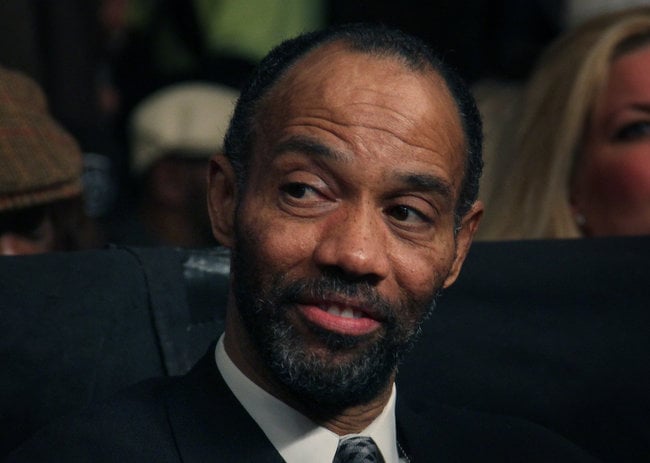 “This is like a dream come true. One of the best days of my life,” said Peterson, the IBF’s 140-pound beltholder, who, like Leonard, hails from the Washington, D.C. area. “I knew that coming here, we were going to be making a big announcement but I never dreamed that it would be anything like this.”

Peterson and company were on hand for a Wednesday press conference to announce NBC’s new boxing series entitled, “Premier Boxing Champions” (“PBC on NBC”) as part of a multi-year deal between the network and adviser Al Haymon, who was on site but – not surprisingly – nowhere to be seen.

The 20 show dates scheduled through 2015 will air on NBC Sports Network and NBC, with 11 episodes slated for the main network and nine scheduled for prime-time shows.

“What I’m going to be able to bring to the table is commentary based on the total, physical experience of having been a fighter for so many years. But this is also my trade,” said Leonard, a former five-division champion and Hall of Famer who will serve as boxing analyst alongside blow-by-blow announcer Al Michaels during the shows and in pre- and post-fight coverage of the fights.

“I’m pretty good at analyzing fights and at breaking these fights down, and I think that I’ve proven that against some of the great, legendary champions that I’ve faced, and I’ve enjoyed that. It’s like a chess match. There is some pressure here but it’s good pressure. There is going to be a lot of pressure, likewise, on these guys who are fighting. These guys are going to know, with this type of exposure in prime time, that it’s going to be about showing up and delivering action-packed competition.”

The initial event will air at 9:00 p.m. ET on March 7 as a doubleheader, matching THE RING’s No. 7-rated welterweight Keith Thurman against No. 8-rated Robert Guerrero and the magazine’s No. 6-rated junior welterweight Adrien Broner opposite John Molina from the MGM Grand in Las Vegas.

On April 11 in New York, likely at Barclays Center, IBF bellholder Peterson will competed in a 143-pound catchweight bout opposite Garcia, the current RING champion. Garcia also holds the WBA and WBC titles.

Leonard said that although having A-list competition on free television is “added pressure” for cable networks HBO and Showtime, “it’s good pressure because you’re going to have to look good and always be on your A-game.”

Lou DiBella, whose promotional company, DiBella Entertainment will promote some of the shows on the series, concurs with Leonard.

“This is back to the future, you know, with the Ray Leonards, the Marvin Haglers, the Thomas Hearns and the Roberto Durans. These are guys who had their early fights and who built their legends on broadcast television,” said DiBella.

“But I don’t think that this is a bad day for boxing or a bad day for HBO or Showtime or for ESPN. I think that it’s great for a sport that has become more marginalized over the last couple of decades.”

Haymon has been criticized for either failing to match his tough fighters against each other or only matching his top talent against light competition.

That notion was addressed by Lamont Jones, Haymon’s vice president of operations.

“We’re just focused on putting together the best possible fights for the fans. I think that people saw that the fights that we announced here today; that speaks to the quality that they can come to expect from our shows now and in the future,” said Jones.

“The way that I look at it is that if a customer goes to the grocery store and sees one steak that has USDA on it and one steak that doesn’t, they’re going to buy that USDA steak. So we want the fans to know that when they see a fight card and a series that has PBC on the telecast, that they’re going to know that can expect to see high quality and competitive match-ups.”

The deal for the boxing series revolves around several of Haymon’s fighters who were released from their promotional agreements with Golden Boy Promotions. These releases were the result of the company’s settlement with former CEO Richard Schaefer.

Still, Jones said Haymon is open to working with Golden Boy and other promoters if it involves pleasing the fans with marquee bouts.

“Our focus is on putting together the best possible fights for the fans and so we manage 150 fighters. We’re able to put together some high-level fights just from within that collection and combination of talent,” said Jones.

“Al Haymon has no problem working with different promoters,” said Watson. “Al manages boxers and just wants to make sure that they’re being paid right and being well taken care of.”

“I respect every fighter that was up there with us today,” said Broner, adding there is “only one fighter that I truly look up to and that’s Floyd Mayweather Jr. But this is something that I’ve always dreamed of and now that I’m here, I’m just taking it all in.”

Molina (27-5, 22 KOs), 32, is attempting come back from two straight losses, having been unanimously decisioned by former lightweight titleholder Humberto Soto in September and knocked out by THE RING’s No. 1-rated 140-pounder Lucas Matthysse in April.

Knowing about his fight with Broner far in advance made it hard for Molina to keep the secret.

“You’ve heard of the term, ‘Don’t bite the hand that feeds you,'” said Molina. “You just don’t do what you shouldn’t do and you prepare for the fight.”

Garcia, 26, of Philadelphia, scored a second-round stoppage of Rod Salka and Peterson, 30, of Washington, D.C., beat Edgar Santana down en route to a 10th-round technical knockout.

“When I was up on the stage with all of those other champions, I was thinking that I’m cut from that same cloth. That was just an amazing feeling,” said Garcia.

“It felt great to be up on the stage with all of those men who actually opened up the door for fighters like us. So to be able to fight on NBC, it feels like you’re being a throwback to the old world.”