Leo Santa Cruz on Jesus Ruiz: ‘One punch can change a fight’ 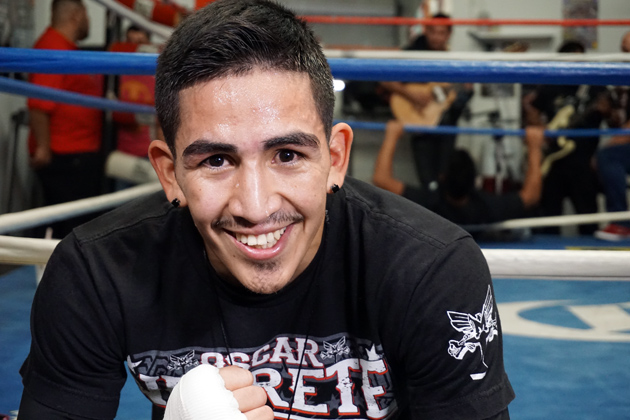 Leo Santa Cruz is well aware that “any fighter is dangerous” and that “one punch can change a fight” entering Saturday’s defense of his WBC junior featherweight title against Jesus Ruiz. The bout will support a heavyweight showdown between WBC titleholder Bermane Stiverne and Deontay Wilder at the MGM Grand in Las Vegas.

“I am always prepared going into every fight. I never underestimate any fighter because those are the ones that can hurt you,” said Santa Cruz during Tuesday’s arrival at the MGM for the Showtime-televised bout.

“When you give them the opportunity, they come prepared and hungry because they want to take the title away from you. Any fighter is dangerous in the ring; one punch could change a fight. Ruiz is a good fighter. I trained really hard for this fight as I always do. I am mentally and physically strong and I’ve been working much more on my power heading into this fight.”

Santa Cruz (28-0-1, 16 knockouts), THE RING’s No. 2-ranked 122-pounder, last fought in September when he blew out overmatched Manuel Roman in two rounds on the undercard of the Floyd Mayweather Jr.-Marcos Maidana rematch. The 26-year-old Southern Californian only fought twice in 2014.

“I am very excited to be here. I promise you; come Saturday, you will have a new world champion. I am motivated and looking forward to this fight. It’s an honor for me to be here and I am grateful for the opportunity. [Santa Cruz is] a fighter that we’re well aware of,” said Ruiz.

“I know his style and the way he fights but we’re ready and prepared to win. He is an explosive fighter and so am I. I don’t think either fighter has an advantage over the other. I think you’re going to see two strong Mexican fighters going at it. It’s going to be an exciting fight.”

Also on the card will be junior welterweight prospect of Albany, N.Y., against southpaw Fidel Maldonado Jr., a winner of six straight fights, including the past five by knockout.

“Boxing is what I do and we’re ready. All that matters is that I get the victory but I definitely want to win impressively. I have big things lined up for 2015 but I need to first take care of business on Saturday.”