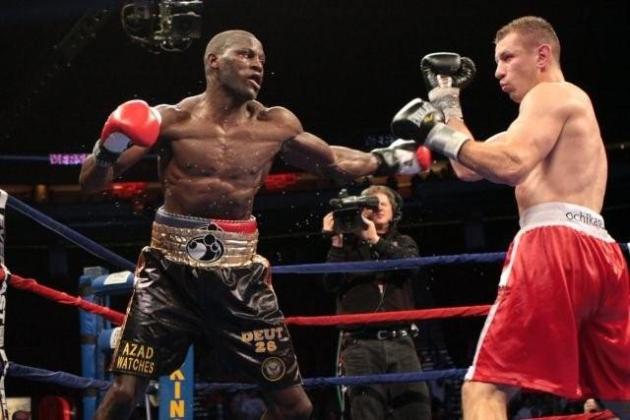 Cuningham and Glazkov, who will be in attendance for a Wednesday 2 p.m. conference at Le Parker Meridien in New York City to promote Kovalev-Pascal, had been considered as a support of a potential April 25 defense by RING heavyweight champion Wladimir Klitschko against Bryant Jennings that is being targeted for Barclays Center in Brooklyn, N.Y.

Glazkov, 30, was last in the ring in November for a seventh round stoppage of Darnell Wilson that had followed consecutive unanimous and majority decisions over Tomasz Adamek and Derric Rossy in March and August, respectively.

Also on the Kovalev-Pascal card in separate bouts against opponents to be determined will be light heavyweights Isaac Chilemba (23-2-2, 10 KOs) and Nadjib Mohammedi (36-3, 22 KOs), who are rated Nos. 6 and 8 by THE RING.

A promotional stablemate of Kovalev’s with Main Events, Mohammedi was the mandatory challenger to Kovalev but has agreed to step aside and allow him to face Pascal. Kovalev, in turn, was granted an exception from the IBF to fight Pascal.

Duva made an offer to the team of Artur Beterbiev (7-0, 7 KOs) to face Chilemba on the card, but has not heard back from the boxer’s Canada-based co-promoters, Jean Bedard of InterBox and Yvon Michel.

“Yvon Michel had plans to meet with Jean Bedard today and I expect to hear from them tomorrow,” said Duva. “We should know by tomorrow whether or not it is being accepted. Chilemba accepted the fight the moment we suggested it. If he doesn’t accept, then we’ll move on to another match.”

During an earlier interview with RingTV.com, Bedard called Beterbiev-Chilemba “a good fight,” and said that he would speak with Michel about making it happen.

Neither Michel nor Bedard could be reached for an immediate comment.

“This would be a great opportunity for him to be in the mix,” said Bedard. “That makes sense, because he could be the future of the division.”

Chilemba, 27, is 3-0 with one knockout since battling to a draw and a unanimous decision loss, both to title challenger Tony Bellew in March 2013 and May 2013, respectively. In his last fight in August, Chilemba scored a seventh round technical knockout over Cory Cummings to follow up a unanimous decision over Denis Grachev in March.

Cloud represented the second fighter with a winning record to face Beterbiev, a resident of Montreal, Canada, who still has not gone beyond four rounds.

In his previous fight in September 2013, Cloud lost by seventh-round knockout to RING champion Adonis Stevenson, who, like Beterbiev, is promoted by Michel.

Michel said he has no plans for Stevenson and Beterbiev to fight in the near future.