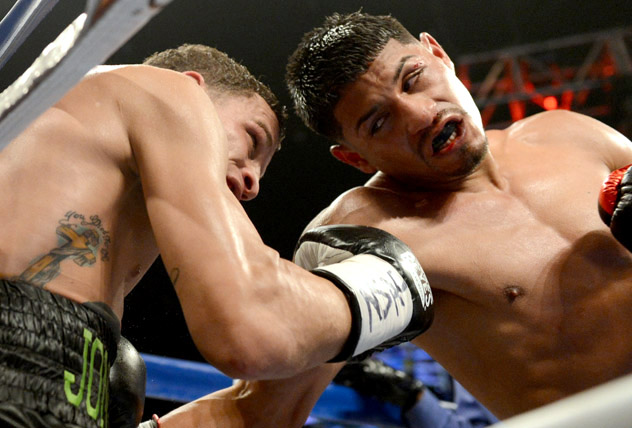 Three-division titlist Abner Mares vowed “to become a world champion again and to get back to where I was” before last month’s fifth-round technical knockout of featherweight Jose Ramirez.

“Of my top three fights that I want the most, definitely, No. 1 would be Jhonny Gonzalez,” said Mares, 29, referring to THE RING No. 1-rated featherweight who floored him twice during a shocking first round knockout victory that dethroned him as WBC beltholder in August 2013. “Jhonny Gonzalez is the fight that I want to get and I would like for that to happen in May.”

Next on Mares’ list is Leo Santa Cruz, THE RING’s No. 2-rated WBC junior featherweight titleholder, followed by RING No. 4-rated featherweight Vasyl Lomachenko, holder of the WBO belt.

“My second fight that I would want the most would be Leo. That’s a fight everyone’s talking about,” said Mares, who was THE RING’s No. 5-rated pound-for-pound fighter entering the bout with Gonzalez. “Lomachenko is known as one of the best fighters out there and he’s a world champion as well.”

Like Mares, Santa Cruz is advised by Al Haymon. Mares, among others, was released from his promotional agreement with Golden Boy Promotions – which has retained the rights to Santa Cruz – as a result of the company’s settlement with former CEO Richard Schaefer.

Not only is Mares-Santa Cruz a fight Golden Boy President Oscar De La Hoya has desired but Santa Cruz has called out Mares and vice versa.

“I think that there still is the potential for a possible fight with Leo. Keeping in mind that Leo still is with Golden Boy Promotions, I know that Oscar himself has said that he was really interested in this fight as well as my side is interested,” said Mares.

“We’ve all been talking about it this last couple of weeks or so and I’m sure that Oscar has done that even though he saw this coming with the settlement. Oscar mentioned it, so I think there are big hopes in the possibility of this fight still happening.”

And then there is Lomachenko, a two-time Olympic gold medalist from Ukraine who is coming off a unanimous decision over Thailand’s Chonlatarn Piriyapinyo in November. Lomachenko, 26, won the vacant belt by majority decision over previously unbeaten Gary Russell Jr. in June.

“I would like to definitely fight Lomachenko,” said Mares. “I’ve never had the WBO title in any division, so I would love to have that belt.”

RING No. 6-rated featherweight Nonito Donaire, a four-division titleholder, has also expressed interest in Mares in the wake of his own sixth round stoppage loss to RING No. 2-rated WBA beltholder Nicholas Walters in October.

“I’m really excited for that possibility of fighting Nonito Donaire,” said Mares. “I’m one of the few fighters who is not scared to fight against anyone and I am looking for a fight against a tough opponent.”