Report: Pacquiao expects Mayweather fight to be announced this month 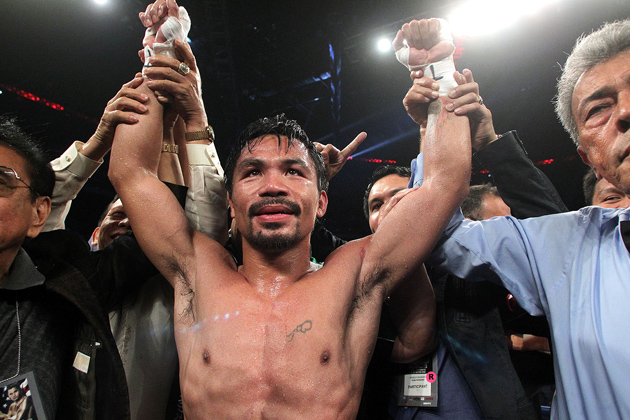 Manny Pacquiao said he expects to announce the eagerly anticipated megabout with Floyd Mayweather Jr. “before the end of the month,” according to a report in The Manila Standard.

“We will make an announcement before the end of the month,” Pacquiao told Ronnie Nathanielsz via telephone during the halftime break of Game 3 of the Philippine Basketball Association Philippine Cup Finals in Manila. “I think it will happen.”

Pacquiao said the bout could happen on May 2 “because that’s what he [Mayweather] wants,” according to The Manila Standard.

A Jan. 9 report in The Los Angeles Times reported that Pacquiao (57-5-2, 38 knockouts) is a agreeable to the demands of Mayweather (47-0, 26 KOs) of a 60-40 split of the purse in favor of the undefeated fighter, although no final agreement has been made.

The Los Angeles Times also indicated that Mayweather and Pacquiao have agreed to fight at The MGM Grand in Las Vegas, as well as on a drug-testing protocol for a bout that could be finalized in seven to 10 days.

Pacquiao stated on Dec. 16 that “Mayweather can get the amount he wants,” adding, “Money is not the issue in our fight.”

During an interview on Showtime on Dec. 12, Mayweather said that he “would love to fight Manny Pacquiao” on May 2. Click here for Floyd Mayweather Jr.’s full video interview with Steve Farhood

During a Dec. 31 interview with RingTV.com, Pacquiao adviser, Michael Koncz, said Pacquiao was being updated regarding the ongoing negotiations for the bout with Mayweather.

“We’re still in negotiations with Floyd’s group through Top Rank. I spoke to Manny this morning. I gave Manny what is perceived to be a counter offer from the Mayweather people,” said Koncz, who then referred to Top Rank CEO Bob Arum.

“We discussed it and now I’ve given instruction to Bob to counter their counter. We’ve been going back and forth. Bob has been negotiating with the powers that be on Floyd’s side for the past couple of weeks. There’s been offers and counter offers, and a couple of days ago Bob called me and gave me allegedly where Floyd’s side is, and I discussed that with Manny two hours ago.

“Now I’ve given Bob our response to that. I’m never overly optimistic until the contract is signed, but the good thing is that we’re still going back and forth.”

“The ball will drop at midnight to usher in 2015,” read a Dec. 31 message Pacquiao’s Twitter account. “@Floyd Mayweather, let’s not not drop the ball on fighting each other next year! #LetsMakeFistory.”