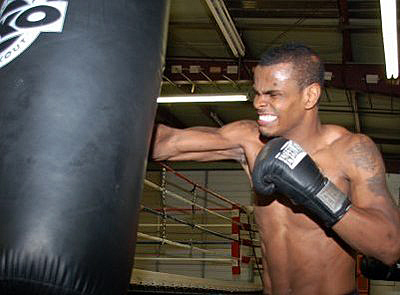 “Boxing was something I always wanted to do as kid, but coming from the south, especially Alabama, it’s all about football, so I played,” said Seals, 32, a former player at Alabama A&M University who began his boxing career at the age of 23.

“I never really had a chance to box. Once I got done with football, I found a gym in Decatur, Alabama, and started there. I fell in love after the first time I sparred. I said ‘Man, I should have been doing this my whole life.’ I was wasting my time with football. I could have been world champion three or four times over by now.”

Seals (18-0, 14 KOs) has gone the distance four times, all four-rounders, and has stopped his past eight opponents. Coming off a fifth round technical knockout victory over Willis Lockett in March, Seals has stopped 11 of his opponents in the first round and two others in two rounds.

“I’ve sparred with lots of world champs and top contenders. Most of the people I sparred with back then were pros, ranked contenders and champs and former champs. I’ve even been to camp with Wladimir Klitschko and held my own,” said Seals.

“He’s a super hero, but I didn’t embarrass myself. Sparring with these guys was like a fight every time out. I was travelling their homes and you know how that goes. They try to make an example of you. I had to fight for my life, basically.”

Seals has just five amateur fights before turning professional with a second round technical knockout over Ousman McClain in November 2008.

“Michael didn’t have a huge amateur career, but he’s a natural talent,” said Margules. “We’re very excited about his prospects for the future. He has the power and the ability to become a major force at 168, 175 and even cruiserweight.”

Seals wants to pick up the intensity over the next phase of his career.

“Hopefully, by the end of the year I will at least be in the top five if not fighting for a world title,” said Seals. “My ultimate goal is to win a super middleweight championship and then move back up and win a light heavyweight title and then win a cruiserweight belt.”