Bermane Stiverne on Deontay Wilder: ‘This is judgment day’ 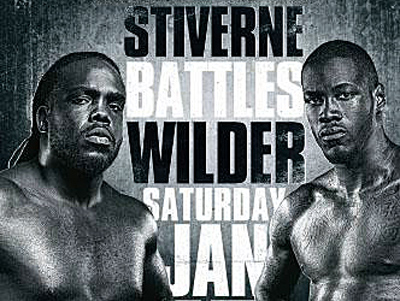 WBC titleholder Bermane Stiverne said, “This is judgment day” for Deontay Wilder during Friday’s Showtime “All Access” episode devoted to their their Jan. 17 heavyweight title clash at the MGM Grand in Las Vegas.

Airing at 10:45 p.m. ET/PT, the documentary previews the bout between Stiverne (24-1-1, 21 knockouts), the first heavyweight beltholder of Haitian descent, and Wilder (32-0, 32 KOs), who is attempting to become the first American titleholder since Shannon Briggs in 2007.

“In his mind, he thinks that it’s a joke or something. I don’t see it like that. This is judgment day for him,” said Stiverne. “I know he’s talking, talking a lot of smack, doing a lot of trash talk,” said Stiverne. “Well, trash belongs in the trash…I’m like the IRS. Fraud. I think that’s what he is. A fraud. I’m gonna hurt him, bad. Very bad.”

“All Access: Stiverne vs. Wilder” will precede the 11 p.m. ET/PT broadcast of Showtime tripleheader whose main event features lightweight prospect Ivan Redkach opposite gatekeeper Yakubu Amidu in an event being promoted by Lou DiBella.