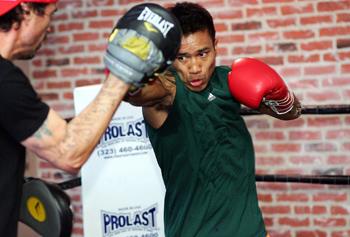 Gesta (28-1-1, 16 knockouts), 27, has scored two consecutive knockouts since losing a unanimous decision to then-long reigning IBF titleholder Miguel Vazquez in December 2012. Gesta is coming off a seventh round knockout over Luis Arceo in July.

Kamegai (25-2-1, 22 KOs), 32, is 3-2 over the course of his past five fights and is coming off last month’s fourth round technical knockout over Oscar Godoy to rebound from a unanimous decision loss to former titleholder Robert Guerrero in a June slugfest.

“I’m excited to kick off 2015 with the addition of these talented fighters to the Golden Boy roster,” said De La Hoya, president of Golden Boy. “Each of these fighters have the talent, skill, determination and desire that it takes to make it to the top.”

The roster also includes junior lightweight Christian Gonzalez as well as featherweights Abraham Lopez and Roy Tapia, all of whom are from California. Lightweight Gilberto Gonzalez and middleweight Antonio Gutierrez are from Mexico.