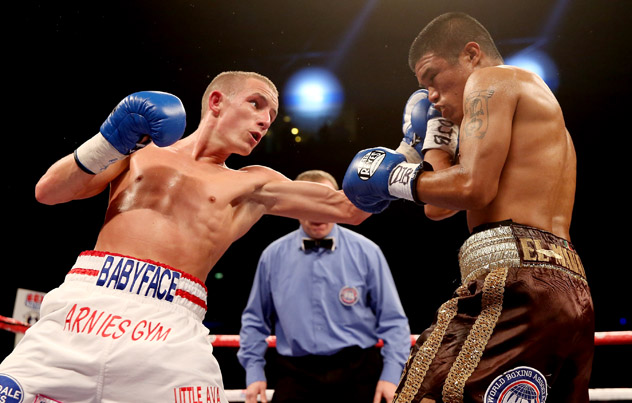 Undefeated former bantamweight beltholder Paul Butler said he will have “extra determination” fighting before his countrymen on March 6 in Liverpool, England, where he will challenge IBF junior bantamweight titleholder Zolani Tete.

“It’s going to be a magical night at the Echo Arena with my fans backing me all the way to a second world title. It’s by no means going to be an easy night against Tete,” said Butler, 26, who will headline a show promoted by Frank Warren.

“He’s a very tough and experienced champion, but fighting for the world title in front of my fans at home means the world to me and that will give me the extra determination to win it.”

A 26-year-old southpaw from South Africa, Tete (19-3, 16 knockouts) was originally scheduled to face Butler (17-0, 8 KOs) on Oct. 25 before suffering a broken left hand that forced him out of his defense.

In place of Tete, Butler unanimously decisioned Mexico’s Ismael Garnica on Oct. 25. Butler had previously been in action in June, when he dethroned Stuart Hall by split decision for the IBF’s 118-pound belt.

In victory over Tete, Butler would become the first British boxer since Bob Fitzsimmons to drop to a lower weight division and win a second world title.

Fitzsimmons was already a former heavyweight champion when he beat George Gardner for the light heavyweight title over 111 years ago, in 1903.

Tete won the vacant belt in his last fight by unanimous decision over previously unbeaten Teiru Kinoshita in Japan.

Also on the card will be local undefeated middleweight Liam Smith (18-0-1, 8 KOs) against an opponent to be determined.

“Championship boxing nights are now a big attraction on the Liverpool scene, and it’s great to be part of the resurgence in the city. I love fighting in front of my home crowd,” said Smith.

“They always go home satisfied after I’ve fought and given them value for money with a knockout win. This is a big year in my career, and I’ve got the world title in my sights.”

Another bout will feature British and Commonwealth flyweight titleholder Kevin Satchell (13-0, 2 KOs) in a rematch with Luke Wilton (16-4-1, 7 KOs), whom Satchell unanimously decisioned in February 2013. Satchell was last in the ring winning the EBU title with a majority decision over Valery Yanchy in October.

“I made of bit of local history as well with the win and it’s fantastic to return straight back and defend the title,” said Satchell. “I’m within touching distance of a world title shot, and Wilton is in the way of that. So I’ll make sure I defeat him a second time.”

“I’ve improved and learned so much from that first loss, and it has made me a much better and stronger fighter because of it,” said Dickens. “This time around you will see a completely different Jazza Dickens.”

Also fighting will be lightweight Derry Mathews (36-9-2, 19 KOs), who has won twice since falling by unanimous decision to Stephen Ormond in December 2013, against an opponent to be determined.