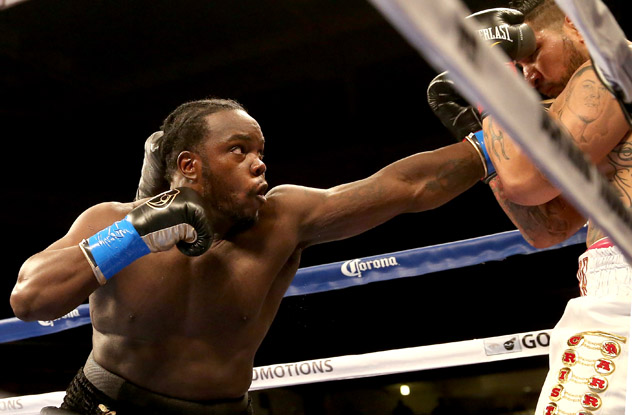 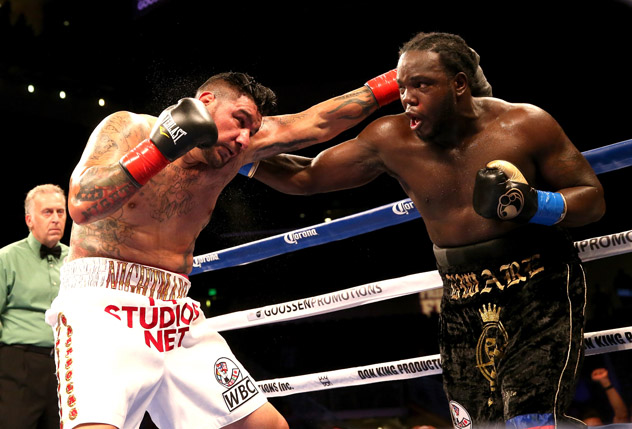 Bermane Stiverne says he’s out to do more than just defend his WBC heavyweight title against knockout artist Deontay Wilder on Jan. 17.

“I’m focused on beating him. I’m not going to just knock him out, I’m going to hurt that kid,” said Stiverne ahead of the Showtime-televised bout at the MGM Grand in Las Vegas.

Referring to Wilder’s boasts that Stiverne is “not going past four” rounds against him, the incumbent said, “His job, I guess, is to make himself big by talking. I feel like I’m fighting Muhammad Ali.”

Co-promoted by Don King and Golden Boy president Oscar De La Hoya, the matchup between Stiverne (24-1-1, 21 knockouts) and Wilder (32-0, 32 KOs) is one which the 36-year-old titleholder has promised will be “a short night” as well as a “painful” one for his 29-year-old counterpart.

“[Wilder is] a great promoter, better than his or my promoter,” said Stiverne. “There’s a lot of hype about him and that’s great for our fight, because it’ll come down to everybody knowing who beat him after the fight.”

Stiverne is coming off a sixth-round technical knockout over Chris Arreola in May that earned the belt which had been vacated when Vitali Klitschko retired to pursue a political career in Ukraine. The victory also made Stiverne the first heavyweight champion of Haitian descent.

Stiverne-Arreola was a rematch of an earlier bout in April 2013, during which Stiverne floored Arreola in the third round of a unanimous-decision victory.

Stiverne is 12-0-1 with nine stoppages since being knocked out in the fourth round in July 2007 by Demetrice King, who is serving as one of Wilder’s sparring partners in advance of the Jan. 17 fight.

“I’ve been down and came back to knock out my opponents,” said Stiverne. “I’ve also won 12 rounds fights. I know I still have power in later rounds.”

A 2008 U.S. Olympic bronze medalist and the last American man to medal in Olympic boxing, Wilder, 29, is coming off a fourth-round knockout of Jason Gavern, whom he dropped in the third and final rounds.

“I don’t say anything about who he’s fought or him not going past four rounds. Those questions should be directed to him,” said Stiverne, who stands 6-foot-2 to Wilder’s 6-7. “I really don’t care. I’m going to chop him down and, if those things are factors, it’ll show in our fight. I’m just doing my job.”

No U.S.-born fighter has held a heavyweight title since 2007, when Shannon Briggs lost a unanimous decision to Sultan Ibragimov and gave up the WBO strap he’d won from Sergei Liakhovich seven months earlier. Wilder owns a first-round stoppage of Liakhovich from August 2013.

In 2006, Hasim Rahman held the WBC belt while the IBF title was held by Chris Byrd. John Ruiz, from Massachusetts, was the first Latino to hold a heavyweight belt when he became the WBA champ in 2005.

RING champion Wladimir Klitschko (63-3, 53 KOs) holds the IBF, WBA and WBO titles, and is coming off a fifth-round stoppage of previously undefeated Kubrat Pulev in November.

“Bermane and I have discussed this fight [with Wilder,] of course, and he told me this guy is a clown and that Wilder thinks this is the WWE,” said Camille Estephan, Stiverne’s manager.”This fight is for real, no joke, and Bermane is ready. He really dislikes this guy and I believe him when he says he’s going to hurt Wilder.”