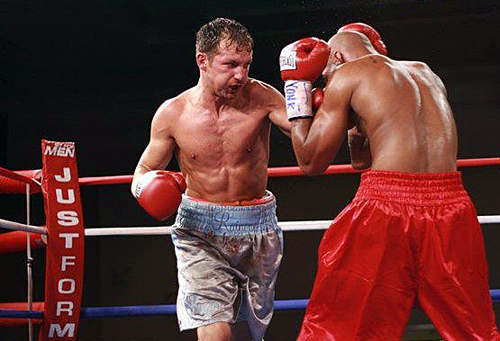 He wasn’t selected to headline the first boxing card promoted under Jay Z’s Roc Nation Sports banner on Jan. 9 at Madison Square Garden because he’s the future of boxing. At the age of 34 he’s far from that. He knows his job description is to give 20-year-old prospect Dusty Hernandez-Harrison just enough of a test inside of the squared circle to put him over. He’s not supposed to win or even hurt the kid – his 22-5-1 record with only 4 knockouts to his credit proves that. He’s durable enough to allow Hernandez-Harrison to put in some rounds yet not dangerous enough to be a threat.

That’s what he’s supposed to be, at least.

But leave it up to the product of Plainview, Long Island to be confident in his plans to derail the speeding hype train of Hernandez-Harrison.

“They look at me as a step towards credibility,” Rainone told RingTV.com. “I’ve never been stopped or dropped and have a decent record. The durability is there and they look at me as a guy who can’t punch because I only have four knockouts. That’s the black and white of it.”

But there’s a grey area that Rainone says his opponent isn’t ready for. The record may not be all that impressive but if you take a closer look at his fights, Rainone has often been the beneficiary of some questionable judging and, as exemplified in his last September draw in the Dominican Republic, some truly shady business.

“That was one of the most shady situations that I’ve ever dealt with,” Rainone says of his draw with Juan Carlos Santos. In the fight, Santos lost two points for head butts and Rainone won three of the four rounds but ended up getting a draw. “We agreed to a six-round fight and as soon as the fourth round ended, the referee waved the fight off. They were trying to get him out of his corner and the promoter stepped into the ring and started talking to the referee. I didn’t know what was going on and then they stopped the fight and called it a draw.”

Rainone is familiar with controversial decisions, as he has dealt with his fair share of them. But never once has he been stopped or dropped, which speaks heavily to his conditioning, chin and durability. He’s also a very slick boxer who adjusts on the fly and gives opponents fits as he has proven quite difficult to land a clean punch against. So if Hernandez-Harrison finds himself paying too much attention to his opponent’s record, he will be in for a rude awakening come Saturday night.

You may be inclined to draw parallels between Rainone and Chris Algieri. And you wouldn’t be wrong. Like Algieri, Rainone is a virtual unknown outside of New York and is being brought in to serve as a rising star’s doormat to walk over on his path to success. And, like Algieri, Rainone has other plans and hopes to land a big fight much like his Long Island counterpart that will hopefully change his fortunes. He currently holds down an audit position at the Hilton and works from 11:00 p.m. to 7:00 a.m. just so he can make ends meet. Admittedly, he looks forward to the day where he no longer has to clock in hours at a day job and hopes beating Hernandez-Harrision will inch him closer to his goal.

“He’s one of the biggest prospects in the country so beating him on national television would be huge,” ‘Razor’ Rainone says. “A win over him can get me a fight with Andre Berto, Adrien Broner or Zab Judah.”

At the age of 34, Rainone doesn’t plan on being in the game much longer. Ever since he began his career at 26, he always has had his sights set on leaving the sport after a 10-year career. He’d much rather walk away than to be forced out of the sport.

“I don’t want to push for an extra year or two, have a couple of losses and regret fighting on,” Rainone says as he points at fighters, ranging from Ali to Gatti, who overstayed their welcome. “We’re in year nine now so in 2016 it will be a wrap. I’m going to do as much as I can in the next two years. Maybe five more fights and that’s it.”