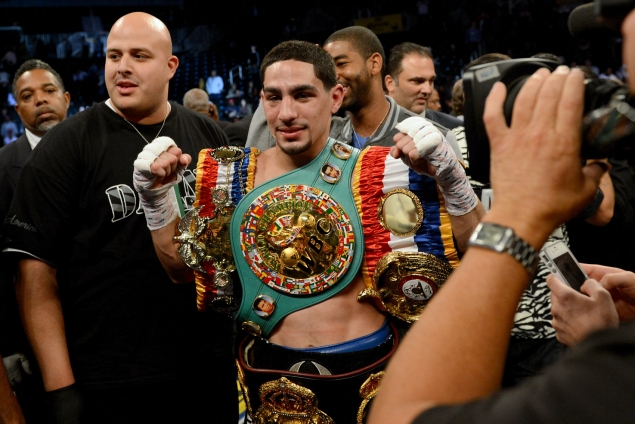 “I will push for Garcia vs. Peterson for the first quarter of the year,” De La Hoya told RingTV.com, adding that he has had ongoing discussions with adviser Al Haymon regarding Garcia-Peterson, calling it, “the next fight that I want to make.”

De La Hoya has promoted many of the fighters in the all-star stable of Haymon, including Garcia (29-0, 17 knockouts) and Peterson (33-2-1, 17 KOs), who scored knockouts in their last fights on the same card in August at Barclays Center in Brooklyn. Garcia, 26, of Philadelphia, scored three knockdowns en route to his second-round stoppage of Rod Salka and Peterson, 30, of Washington, D.C., handled Edgar Santana on the way to a 10th-round technical knockout.

In addition to RING 147 and 154-pound champion Floyd Mayweather Jr., Haymon’s other fighters in and around the 140-pound division include Amir Khan, Marcos Maidana, Keith Thurman, Adrien Broner, Lucas Matthysse and Robert Guerrero.

Haymon also has three-division title winner Abner Mares, who is competing in the featherweight division, and heavyweight Deontay Wilder, who will challenge WBC beltholder Bermane Stiverne on Jan. 17 on Showtime.

Named Promoter of The Year for 2014 by Sport Illustrated, De La Hoya has expressed interested in a bout between Mares and two-division titleholder Leo Santa Cruz, who has a Jan. 17 defense against Jesus Ruiz.