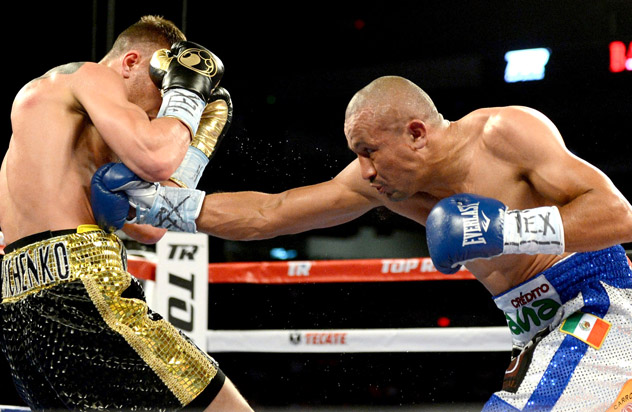 Talks are ongoing for a March 21 junior lightweight clash between Mexican three-time titlist Orlando Salido and Puerto Rican two-time beltholder Rocky Martinez at a venue to be determined in San Juan, Puerto Rico, according to Salido’s manager, Sean Gibbons.

“We’ve looked at a lot of possibilities and the date that I’m working on is March 21. We haven’t confirmed a venue,” said Gibbons, referring to discussions with Martinez’s promoter, Peter Rivera of PR Best Boxing.

“There are no contracts signed but we’re very close. March 21 is definitely the date but if things can’t come together soon, then we may have to go back a tad. But Peter definitely wants to go on March 21.”

Kokietgym, whose seven-fight winning streak came to an end, was floored in the first, fourth, seventh and final rounds before referee Eddie Claudio waved an end to the bout at the 16-second mark.

Entering the bout with Kokietgym, Salido, 34, was coming off a split decision victory over Vasyl Lomachenko in March. Before the win over Lomachenko, Salido had already lost his WBO featherweight title on the scales prior to the fight.

Since being dethroned as WBO titleholder following a unanimous decision to Ricky Burns in September of 2010, Martinez (28-2-2, 17 KOs) is 4-1-1 with two knockouts and has been involved in three split decisions, one being a draw.

Martinez lost that title in his next bout in November of last year in an eighth round stoppage loss to Mikey Garcia despite scoring a second round knockdown. In his most recent fight last month, Martinez knocked out Herbert Quartey in the second round.