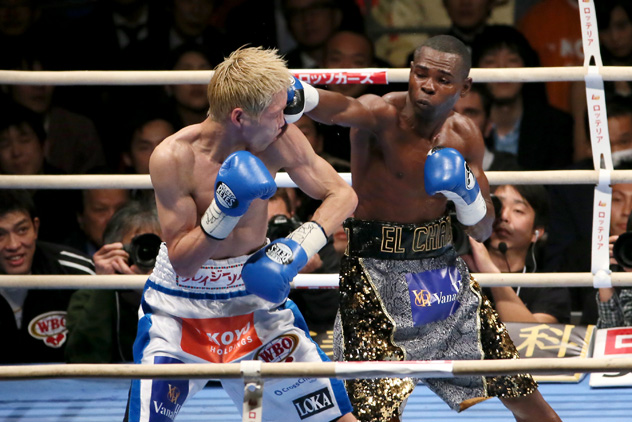 RING junior featherweight champion Guillermo Rigondeaux said he intentionally mixed it up with Hisashi Amagasa, who dropped him twice in Round 7 of his entertaining title defense against the Japanese slugger. Rigondeaux stopped Amagasa after 11 rounds on New Year’s Eve in Osaka, Japan.
“The boxing public has been asking for more action,” said Rigondeaux, a 34-year-old southpaw from Cuba. “So I delivered.”
Rigondeaux (15-0, 10 knockouts) floored Amagasa (28-5-2, 19 KOs) in the ninth and continued his offensive assault through Round 11, after which the loser’s corner stopped the fight before his partisan fans at the Bodymaker Colosseum.

Rigondeaux so severely hammered Amagasa in defense of his WBA and WBO belts that the Japanese fighter’s right eye was closed, and the left side of his jaw was grotesquely swollen.

It appeared that Amagasa, 29, might be successful when a hard right hand dropped Rigondeaux in Round 7. Rigondeaux was floored, yet again, after absorbing several more blows, but escaped the round.

“The first punch which caused the knockdown was not a powerful blow. I was caught off balance and suffered a flash knockdown. I was not hurt, but I had to be on guard as my opponent gained confidence and threw everything at me in that round,” said Rigondeaux. “I have a lot of skills. On Wednesday night, I showed I can mix it up and, more importantly, that I can close the show in devastating fashion.”

Amagasa was coming off a 12th-round technical knockout of Ryo Takenaka in October, representing his 13th consecutive victory during a run that included seven knockouts and stoppages in his previous three bouts.

“We are pleased that the fans have complimented Rigo for his performance,” said Hyde, of the feedback he claims to have received as a result of Rigondeaux’s triumph over Amagasa. “The fans have hinted that they want blood and guts, and Rigo certainly showed he can massacre fighters if needs be.”

Rigondeaux had previously been in action for a first-round knockout of Sod Kokietgym on a Top Rank Promotions card in Macau, China in July, ending a 36-0-1 unbeaten streak for Kokietgym. Prior to facing Kokietgym, Rigondeaux was coming off consecutive unanimous decisions over Nonito Donaire in April 2013 and Joseph Agbeko last December.

In the past, Hyde and Rigondeaux mentioned desired bouts against either THE RING No. 1-rated junior featherweight, IBF beltholder Carl Frampton, the magazines’s No. 2-ranked contender, WBC titleholder Leo Santa Cruz, or No. 3-rated Scott Quigg, all of whom are unbeaten.

Most recently, however, Hyde emphasized Quigg and Santa Cruz as favored opposition.

“Rigo is looking at forcing the WBA to order the Quigg fight. He would like the Santa Cruz fight, also, but the guy wants no part of him,” said Hyde, who dismissed the notion that the 5-foot-4 Rigondeaux was looking beyond the nearly 5-11 Amagasa toward bigger fights. “Rigo never underestimates his opponents. Amagasa was the home fighter who was much bigger than Rigo, so Rigo pulled out his ‘A’- game.”

Santa Cruz (28-0-1, 16 KOs) will defend his title against Jesus Ruiz (35-5, 22 KOs) on the undercard of a heavyweight bout between WBC titleholder Bermane Stiverne and Deontay Wilder on Jan. 17 at the MGM Grand in Las Vegas, and Frampton (19-0, 13 KOs) is scheduled to defend his belt against Chris Avalos (24-2, 18 KOs) on either on Feb. 28 or March 27 at the Odyssey Arena in Frampton’s hometown of Belfast, Northern Ireland.

Before fighting Amagasa, Rigondeaux indicated that he could dispatch Amagasa and be ready to fight Santa Cruz on Jan. 17, if necessary.

Rigondeaux said he will not be ringside for Santa Cruz’s fight with Ruiz, whom he dismissed as “a soft opponent.”

“Santa Cruz is a joke. I will not attend the show,” said Rigondeaux. “I have no interest in watching him fighting another soft opponent.”