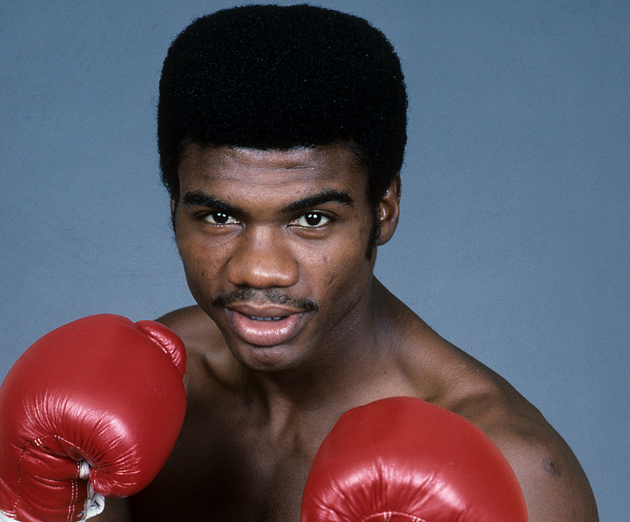 An old boxing adage states that punchers are born, not made. That was certainly the case with Julian Jackson, one of the hardest hitters in modern boxing history.

During his outstanding career Jackson won world titles at junior middleweight and middleweight, first holding the WBA 154-pound belt before stepping up to 160 pounds where the Virgin Islander’s power was every bit as devastating. He held the WBC middleweight crown on two occasions.

“It’s something you are born with,” Jackson told RingTV.com when recounting the first time he knew he had fight-ending power. “I remember as an amateur and the first time I threw a punch was against a professional and I knocked him down. I was about 17 or 18 (years old). I caught him with a right hand. That was the first time I realized I had natural power.

“I always seemed to have that power punch in the bag. I felt the power and my coach said I don’t have to try to hit hard all I need to do is throw the punch because my natural ability would click in. I realized that and I really found out I had that punching ability much more than a lot of amateurs I grew up with and trained with.”

Jackson won his first 29 professional bouts, with only two opponents hearing the final bell, before challenging Mike McCallum for the WBA junior middleweight crown. Though Jackson hurt McCallum in the opening round of their August 1986 showdown it was his fellow Caribbean power-puncher that came out on top, stopping Jackson in the following round.

With little left to prove at 154 pounds, Jackson headed to middleweight. However, the British Boxing board of Control refused to sanction a WBC middleweight championship bout with Herol Graham in Britain because of previous retina damage Jackson had suffered, which kept him out of action for nearly a year. With that in mind the fight took place in at a hotel in Benalmadena, Spain. For much of the first four rounds Graham gave Jackson a boxing lesson. However, Jackson’s fight-ending power was once again in evidence when he dramatically stopped Graham, considered the best British fighter to never win a world title, with one shot in Round 4.

Jackson has fond memories of his first middleweight title bout.

“Of all my knockouts that was one of the most historic,” he said. “The fight was amazing. Herol was a very good fighter, fast as well; he was a big middleweight and he was

“I got caught early in the fight, I think my right eye was swollen, the ref said if I don’t do something he’s going to stop the fight. I switched (stances) so I could see him with my left eye and I literally threw the right hook since I switched to southpaw and he came straight in figuring he got me and I realized the punch was there, he was open. He came in for the kill and that’s when I was able to get off my right hook and caught him flush on the chin.”

Jackson defended the title on four occasions before running into Gerald McClellan on a bumper bill in Las Vegas that also featured Lennox Lewis and Julio Cesar Chavez in separate bouts.

Jackson had his moments before McClellan struck in the fifth frame, ending the fight with his own vicious knockout.

“I would say even though I hit him, I caught him with some punches, especially body shots, it was effecting him,” said Jackson. “I didn’t get a chance to really get my punches off to the chin that I really wanted to. I felt that he was able to elude me and prevent me from getting off my punches to the head. That’s something they worked on. They decided if I get hit from Julian I’m probably going to get knocked out. It just happened that I got hit.”

Three victories followed to set up the rematch on Don King’s “Revenge: The Rematches” pay-per-view event a year later. Jackson was unable to redress the balance and was stopped midway through the opening round.

With his 34th birthday looming Jackson’s best days appeared to be behind him. However, according to another boxing adage, the last thing a fighter loses is his power.

When McClellan vacated the title to move up in weight Jackson was matched with Agostino Cardamone for the vacant title.

Jackson recovered from being hurt in the opening stanza to demolish the unbeaten Italian in typical highlight-reel fashion, dropping Cardamone heavily and forcing the referee to call a halt to the action in the second round.

Though Jackson lost the title five months later to Quincy Taylor, he continued to fight, though lost back-to-back stoppages in his final two bouts and called it a day in 1998.

After 18 years as a pro, Jackson decided to bow out with a mark of 55-6 with 49 inside the distance wins.

Despite signature wins over Norris and Graham, Jackson feels his best night as a boxer came in the spring of 1987 against Milton Leaks.

“It was my first (significant) fight after the Mike McCallum championship fight,” he said in his distinct Caribbean accent. “I had to look good after losing to Mike and believe me it was one of those fights that you never forget.

The Virgin Island resident is happy with his achievements though does feel he missed out on a superfight.

“The one thing that I feel I didn’t achieve in my boxing career is fighting a mega fight,” he said, “which I believe would have made my career more outstanding.”

Like most fighters of his generation he craved a fight with Sugar Ray Leonard.

“One of the reasons, is that he said he would fight the winner of Terry Norris vs. The Hawk and he chose the loser Terry,” said Jackson.

Today, Jackson, 54, is a minister and works as a sport co-ordinator in boxing for the government in the Virgin Islands. He also trains his two sons Julius and John as well as his nephew Samuel Rogers, all of whom are professional.

Retirement seems to sit well with Jackson: “I enjoy my retirement because I love my country, my family and my new career as a coach.”

Recently Jackson took time out from his hectic schedule to kindly speak with RingTV.com about the best fighters he fought in 10 categories. 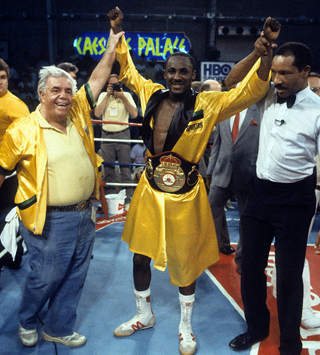 Best Skills – Mike McCallum – he was very seasoned. At that time he was the most experienced boxer that I had met. He was already a champion. I felt he was also very technical. He had all the tools as a boxer and I felt I had the power to knock him out but it turned out to be the opposite.

Best Jab – McCallum – When I look back I would say Mike McCallum probably had one of the best jabs. He was tall; his height had a lot to do with his jab. I guess his timing and his experience, all of that played with that scenario.

Best Defense – Gerald McClellan – In my first fight with Gerald McClellan I didn’t get to hit him like I really wanted to. I was getting to him but somehow my punches weren’t landing clean enough. He was always able to defend and move. His defense was fairly strong and instead of me getting the knockout, which I really believe I would have, I got caught from him and I was the one who got knocked out.

Best Chin – Thomas Tate – I can’t say it was Mike McCallum or Gerald McClellan. I fought this guy in Las Vegas, Thomas Tate. As a matter of fact, I remember the referee, Richard Steele, I literally heard him tell the guy to move because it seemed as though he was giving up. I was not able to end the fight and he was able to survive but I did knock him down but he got back up and we went the distance.

There was a guy I fought in a very cold place but I can’t remember his name. I don’t know if the fight was recorded but I remember fighting this white guy and I hit him with the sink and he wouldn’t go down. 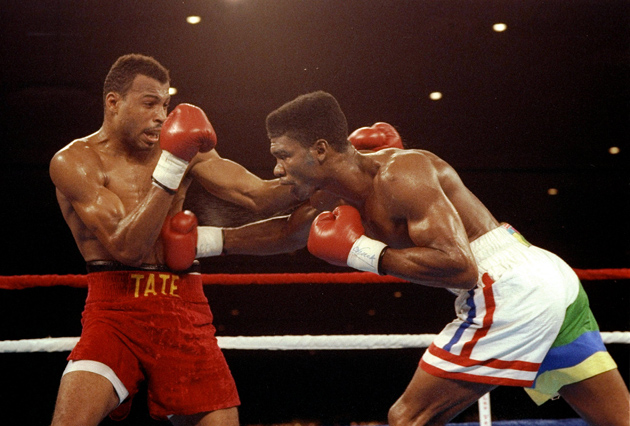 Best Puncher – McClellan – Definitely Gerald McClellan. He was a natural puncher like myself. I knew it and he knew it. I said the one who gets hit first is gonna go down and I guess I was the one that got hit first (laughs).

Fastest Hands – Terry Norris – Terry Norris was naturally quick. Harold Graham was fast but Terry Norris was naturally quick. It was amazing. It seemed as though he was gonna throw one jab and the next thing you know you’re getting hit by two or three jabs. His hand speed to me was the best. My timing was the key to combat his speed. I wasn’t as fast, I was quick, but I wasn’t as fast, my timing was the key, putting on the pressure to combat that speed. 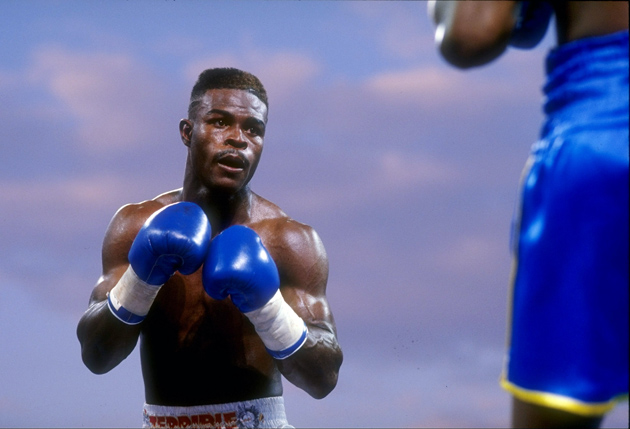 Fastest Feet – Norris – I believe hand and foot speed is something that comes as a package. I would say Terry Norris. His hand speed had to match his foot speed and he had good footwork as well.

Smartest – McCallum – He knew he was in a fight and I had a puncher’s chance and he was afraid of me ’cause just the way he was fighting and what he did in the fight to try to stop me from knocking (him) out. He thumbed me. I got about two or three low blows the referee didn’t see. You might say that’s not smart it’s dirty but he was able to throw me off my game plan because of that. I was really upset because of that.

Strongest – Francisco De Jesus – I hit this guy with punches, even though I stopped him, it was amazing the strength this kid had. He just had power and I could feel the brute strength of this kid. He was stronger than McClellan or McCallum as far as what I felt in that fight. You can be strong, even though McClellan was a very strong puncher his strength may not have been as strong as this guy. When we clinched I could literally feel his power and I was like “woo.” 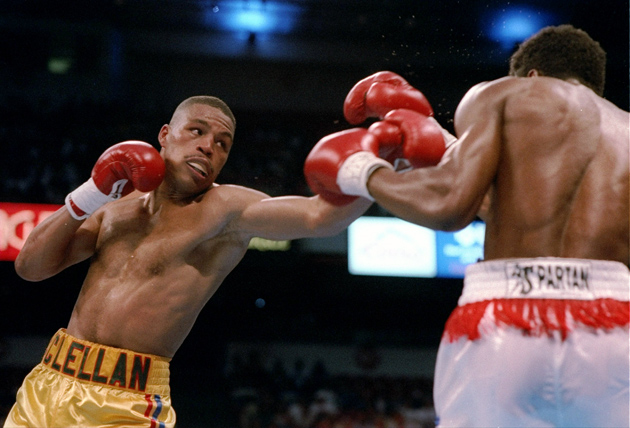