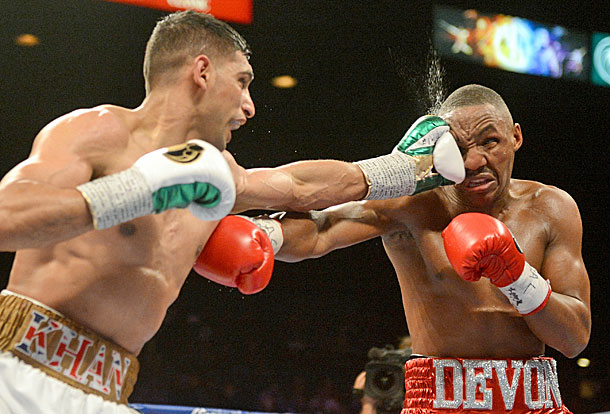 On Monday, British welterweight Amir Khan, who is of Pakistani descent, visited a school in Peshawar and paid his respects to the victims of an attack during which Taliban gunmen slaughtered nearly 150 people, including more than 130 children, according to various reports by the Agence France-Presse.

“What has taken place in Peshawar is absolutely horrific and sickening. After recently becoming a father myself, I can’t imagine how the families of these innocent children are feeling. I am willing to offer my help to the government of Pakistan and all the stakeholders,” said Khan, during a Dec. 24 press conference in Islamabad held shortly after he landed in Pakistan.

“Any help from my side to rebuild the damaged school and to help the fight against terrorism. I want to start doing more work here, to build gyms here. I want to show people that we can improve the country. There are a lot of good fighters here. There’s a lot of talent in Pakistan that it is not being used and I am here to help and show my support.”

Coming off a unanimous decision over Devon Alexander on Dec. 13, Khan has donated the trunks he wore against Alexander toward helping to raise money to repair the school. Reportedly worth $47,000, the most expensive ever worn into the ring in boxing history, the leather shorts had 24-karat gold woven into the waistband.

“Talking about this stuff could be threatening for me but I just want to speak the truth and tell people what is happening is wrong. I think it’s more important now than ever to go over there,” said Khan, 28, on Wednesday.

“I think it will send a statement to a lot of people that Amir Khan is going there to make a difference. I want it to be a better country. It’s just a shame. I cannot believe how sick some people are.”

Khan unanimously decisioned Alexander, a two-division titleholder, winning by scores of 118-110, 119-109 and 120-108 on the cards of judges John McKaie, Glenn Feldman and Jerry Roth, respectively.

“The main reason I’ve come to Pakistan was to come to Peshawar and see the parents and the children and give the children the confidence to go back to school,” said Khan. “My heart goes out to the families and the parents whose children died. We have to stop terrorism and with the help of the army and the people of Pakistan, we can stop it.