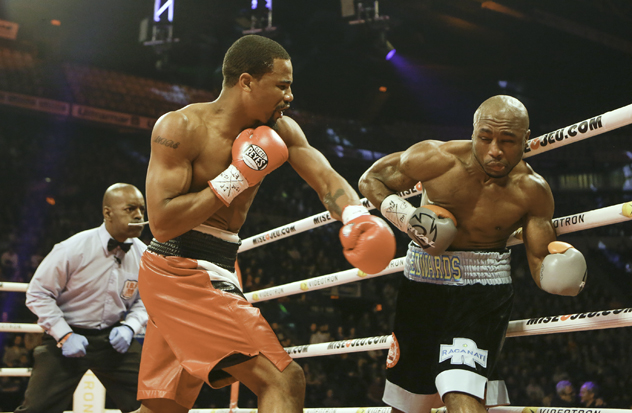 But their over-matched opponents didn’t go down or out without getting their licks in. Edwards landed a big hook that wobbled Dirrell one minute into Round 12 and another hook that stunned the talented switch-hitter in the final seconds of the 12-round IBF elimination bout. Page (15-1, 10 knockouts), a 24-year-old boxer from the Kansas club circuit, surprised a lot of observers by outboxing the much-ballyhooed Beterbiev in the opening round of their bout. The untested American shocked those same observers by dropping Beterbiev (7-0, 7 KOs), a 29-year-old Russian amateur star, in the final seconds of the round.

Beterbiev, who is coming off a second-round stoppage of former IBF titleholder Tavoris Cloud in September, got on track in Round 2, dropping Page three times with an assortment of clubbing power shots until the showcase bout was waved off at 2:21 of the round.

“I felt a bit sleepy before the fight and I lost my focus for just a fraction of a second (when I was knocked down),” Beterbiev (through a translator) told Jim Gray of Showtime, which televised the fight in the U.S. “I got a bit angry after (the knockdown) and decided to go after him (in Round 2).”

Dirrell (24-1, 16 knockouts), who chose to box out of the southpaw stance for the entire fight against Edwards, had his way with the 35-year-old gatekeeper until he was stunned by big left hooks in the final round. The talented 2004 Olympic bronze medalist tied Edwards (27-4-1, 14 KOs) up for most of Round 12, effectively running out the clock and getting the “W.”

“I want to perfect my craft fighting southpaw,” Dirrell told Gray when asked why he didn’t fight from a right-handed stance. It was suggested that Dirrell had an injured right hand, which encouraged him to remain in a left-handed stance. Some observers thought Dirrell might have scored a stoppage had he used his right more as a power punch.

“This boy got a tough head,” he said. “I don’t doubt my power one bit. He can take a shot. My(right) knuckle was hurting but not enough for me not to throw it.”

The victory over Edwards was Dirrell’s third bout of 2014. He only fought once in 2011 and once in 2013. The inactivity due to head injuries suffered during his DQ victory over Arthur Abraham in early 2010 and due to managerial/promotional problems. Apart from much needed activity, the Edwards win earned Dirrell the No. 2 spot in the IBF. Dirrell, who lost a controversial split-decision loss to current IBF titleholder Carl Froch in October 2009 (in Forch’s hometown of Nottingham, England), wants a rematch with THE RING’s No. 1-rated super middleweight.

“I honestly believe (Froch is) scared to fight me, it’s too risky,” Dirrell said, “but there’s a win on his record that’s questionable to everyone in the world. If he wants to prove to his fans that he’s really better than me he’ll fight me again.”

Dirrell may have to face the IBF’s top contender James DeGale to get a shot at the title, let alone a rematch with Froch.