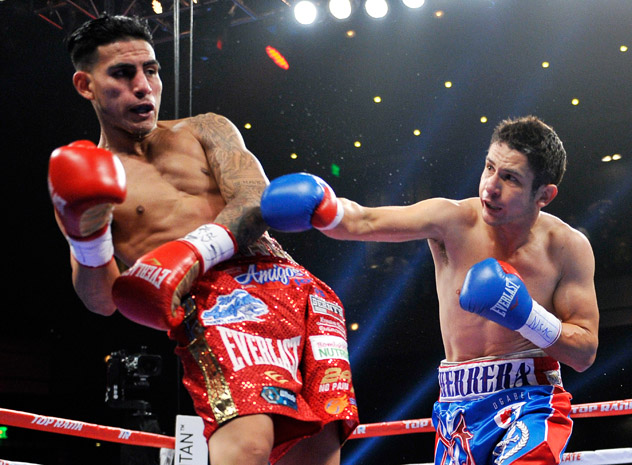 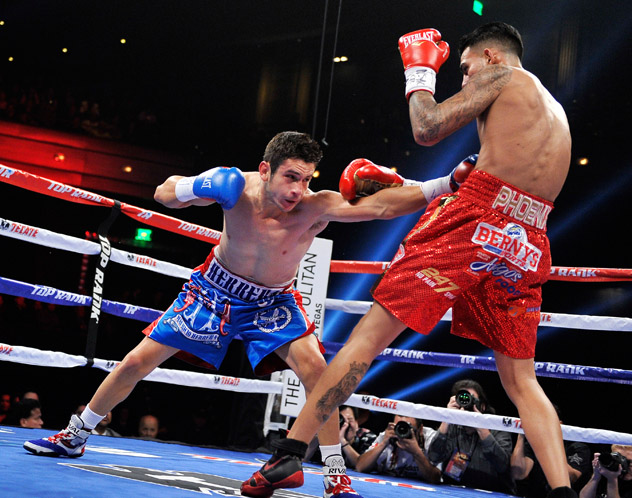 At the end of 12 fast paced rounds the consensus at ringside at The Cosmopolitan in Las Vegas was that Mauricio Herrera had done enough to outpoint undefeated junior welterweight prospect Jose Benavidez Jr.

Herrera (21-5, 7 knockouts) has been on the wrong end of dubious decisions in the past. He admits to having a funny feeling listening to the scores being read out.

“I just felt something in the pit of my stomach that I’d get robbed and then it happened,” said Herrera. “We thought we clearly won.

“They say I need to knock my opponents out to win fights but hey they’re not knocking me out either. If I did knock them out I’d probably get disqualified.”

The 34-year-old went 1-2 in 2014, though could easily have gone 3-0. Many believed he also deserved the decision against RING, WBC and WBA champion Danny Garcia, who he fought in March.

A couple of days removed from the decision, RingTV.com caught up with Herrera.

Anson Wainwright – You were on the receiving end of a decision many believe you deserved to win.

Mauricio Herrera – Yeah, I thought I clearly won, I was confident I was gonna get the decision. I did everything, I pushed the fight, I was aggressive, I landed a lot of body shots. I made the fight. If I wasn’t the aggressor I don’t think there would be any fight. It wasn’t until they started announcing the scores, I just had a gut feeling that they were going to take it from me, I don’t know why.

AW – Have you watched the fight since?

MH – Yeah we watched it already and still feel the same way. I keep looking back at it and I don’t see where he was winning all those rounds they said he did. You can give him three rounds or four rounds and that still wouldn’t give him the fight. I don’t think he did enough. I outworked him; he fought in spots. There were good shots he landed here and there but I don’t think they were enough to steal the whole round because of the work that I was doing. I was looking at having one of the best years of my career even after getting robbed against Danny (Garcia).

AW – What did Oscar De La Hoya say to you after the fight?

MH – He said “No, that’s not right, you deserved to win that. (Golden Boy Promotions matchmaker) Robert Diaz said he thought you won the fight and everyone ringside said you won.” They said they’re going to protest the decision. I don’t know what steps they can do. Whatever they do, the people know who won. I’ve just got to be strong and keep going. It just motivates me sky high for 2015.

AW – Did anyone from Top Rank speak to you?

MH – No, I didn’t see anyone from Top Rank. I don’t know what their thoughts were on it. I know Benavidez’s dad came to the locker room afterwards and was telling my corner that to be honest (he thought) we were going to get the decision when he was hearing the scorecards and he said when they called his son’s name he was happy they called his name and that they got the decision but he said he thought it was going to go for me.

AW – You touched on the Garcia fight. That was also a controversial loss. You rebounded over the summer and then you had this fight. You could have been 3-0 but instead you’re 1-2. Life could have been very different had you got those decisions.

MH – It could have been the best year for me, it could have been life changing. I don’t like to think about it too much and how things could have been different because then it would start to get to me. I’m just staying positive and read all the good comments. That keeps me motivated just to prove to them in 2015. I don’t think anybody has been able to beat me decisively in my career. That’s all I can do, keep going forward, keep on punching. I can’t let it get me down.

AW – We’re a couple of days removed from the fight. What would you like to do next?

MH – I want the biggest, baddest dudes out there. I want the biggest names. I think I’m the type of fighter you throw me in with the best fighter out there it brings out the best in me. I’m that type of fighter. You bring me the most competitive fights and I show you more tricks up my sleeve. Benavidez didn’t push me in this fight; neither did Danny. When I fought them, I had to be the aggressor, even though I don’t have the big punch. If I was fighting someone like (Ruslan) Provodnikov, he’s a come forward fighter, he brings more out of me and gives a better show for the people. I’m looking for a big name, somebody tough, somebody nobody thinks I can beat. That will motivate me. I’m looking to put on great shows for the people in the future.