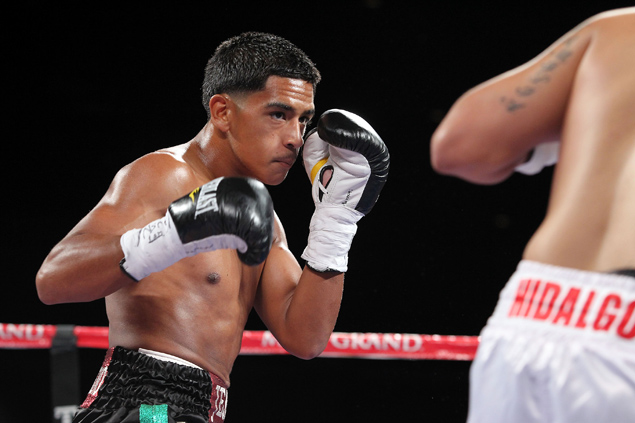 The scheduled eight-round bout will headline a Top Rank card that will take place at the Texas Station Gambling Hall and Hotel in Las Vegas, Nevada.

The bout between Magdaleno and Ruiz was originally scheduled to take place on Oct. 25 at the Selland Arena in Fresno, Calif. About a week and half from the fight, Magdaleno had to withdraw from the fight to take care of a personal matter in his hometown of Las Vegas.

Magdaleno (19-0, 15 KOs) has not fought since Aug. 2, when he stopped Carlos Rodriguez in the seventh round. He has stopped his last six opponents.

Magdaleno, who is managed by Frank Espinoza, works with trainer Joel Diaz in Indio, California along with his older brother Diego Magdaleno, a junior lightweight contender.

Ruiz (13-1, 6 KOs) has not fought since July 19, when he defeated Jonathan Alcantara over six rounds in Lancaster, Calif. He has won his last four bouts in a row since losing his only pro bout at the hands of Isaac Zarate on Aug. 24 of last year.

Ruiz resides in Oxnard, California and trains at the Robert Garcia Boxing Academy. The Magdaleno fight will be Ruiz’s first scheduled eight-round bout.

Francisco A. Salazar has written for RingTV since September of 2012 and has covered boxing in Southern California and abroad since 2000. Salazar also covers boxing for the Ventura County (CA) Star newspaper, Boxingscene.com, and Knockout Nation. He can be reached by email at [email protected] or on Twitter at FSalazarBoxing