Nicholas Walters: ‘I am a different breed. I am a gladiator’ 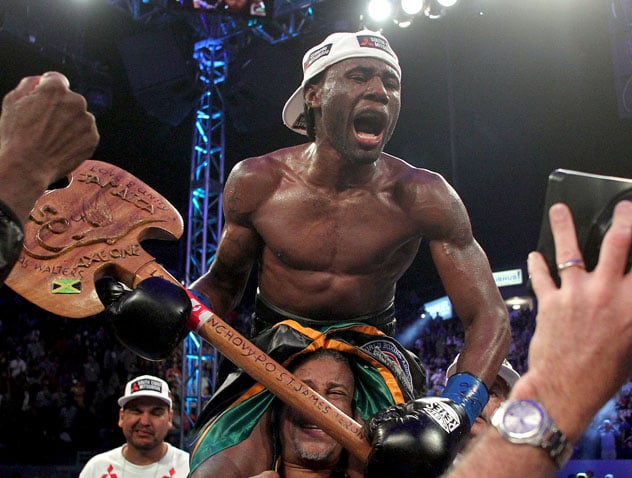 You don’t get much more dominant than Nicholas Walters has been over the past four years, a stretch during which the RING’s No. 2-rated featherweight has knocked out 11 of his past 12 opponents dating back to April 2010.

A Jamaican-born fighter who lives and trains in Panama City, Panama, Walters (25-0, 21 knockouts) is coming off the biggest victory of his career and his fifth consecutive stoppage, via sixth-round TKO that dethroned RING 6-rated Nonito Donaire as WBA titleholder in October.

Nicknamed “Axe Man,” Walters, 28, floored Donaire once each in the third and final rounds of a triumph that was preceded his fifth-round knockout of two-division titleholder Vic Darchinyan, whom he dropped once in the second round and twice in the last in May.

Since his sixth-round technical knockout of Alexander Alonso in April 2010, Walters’ has gone the distance with just one fighter, Hector Javier Marquez in March 2012.

Walters dropped Donaire with a right uppercut in the third round, overcame being rocked and badly shaken by a left hook at the end of the second and floored Donaire for good, face-first, with a right to the temple at the 2:59 mark of the sixth round.

“Definitely this year, I beat two of the top fighters of this time and one of them, Nonito Donaire was one of my favorite fighters also. So I feel that it was an excellent year for me, just like last year,” said Walters, who craves a unification bout against either RING No. 1-rated Jhonny Gonzalez, RING No. 4 Vasyl Lomachenko or RING No. 5 Evgeny Gradovich, respective holders of the WBC, WBO and IBF belts.

“I mean, I beat two big-named guys last year and I’m undefeated. I didn’t just knock those two guys out but I was definitely winning the fights in every round on the scorecards. My fans love my fights, and they’re looking for me and everybody is wondering what’s going to be next for me for the year 2015. So I’m really hoping that there are some big fights on some big cards so that I can really continue to display my talents in 2015.”

Walters is managed by Jacques Deschamps and advised by Rob Mittleman, the latter of whom has been in talks with Top Rank Promotions CEO Bob Arum regarding a potential return during the first quarter of 2015.

Mittleman said Walters and Lomachenko are being targeted for a doubleheader appearance in separate bouts “in late February or sometime in March” with the goal of facing each other later in a unification bout later in the year.

“The last time that I spoke to Bob Arum, his thing was that they were going to fight in two different bouts. Lomachenko is going to fight one guy and Nick Walters will fight one guy,” said Mittleman. “That would happen in late February or sometime in March and then, the two of them would fight. So that’s how it is in Bob’s plans right now.”

Mittleman would like Walters’ next fight to be against Simpiwe Vetyeka, whom Donaire dethroned for the WBA belt via fifth-round technical decision in May.

Vetyeka was floored during the fourth round by Donaire, whose victory earned his sixth major title in a fourth weight class. Donaire overcame a first-round cut that resulted from an accidental headbutt, forcing the result to go to the scorecards.

“There are a lot of guys who we’d fight but we’d love to fight Vetyeka…He didn’t embarrass himself against Donaire as much as Donaire quit after he got cut. Vetyeka is a guy who beat Chris John, so we’d fight him,” said Mittleman.

Walters has stated in the past that he would prefer his next challenge to be against Gonzalez, if not Gradovich.

In his last fight in on Oct. 4, Gonzalez floored four-division titlist Jorge Arce in the third, fifth and ninth rounds en route to an 11th-round stoppage.

The win over Arce represented the second defense of the WBC belt Gonzalez won by a shocking first-round knockout of previously unbeaten Abner Mares.

Gradovich is coming off last month’s draw with undefeated Jayson Velez that had followed his unanimous decision over Alexander Miskirtchian in May.

“Gonzalez and Gradovich, they are the big names but I will leave all of that up to my managers. I’m just the fighter. All that I do is train. Whoever they say is the next opponent, then that’s who it is. If it’s Lomachenko, then no problem; let’s do Lomachenko. So, listen, I would fight Lomachenko,” said Walters.