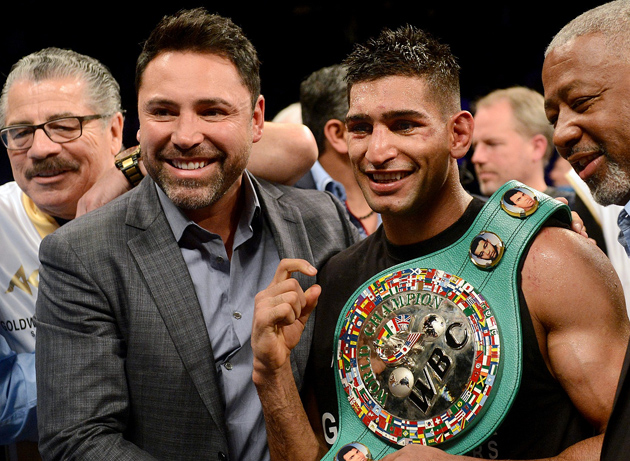 Oscar De La Hoya, Amir Khan and Keith Thurman spoke to the media during the post-fight press conference for Khan’s one-sided decision over Devon Alexander on Saturday at the MGM Grand in Las Vegas.

Khan (30-3, 19 knockouts) began the presser praising Alexander, who was expected to give him a more competitive fight.

“It was a tough fight, Alexander came to fight and at times I wanted to fight with him but I made it easy work because I didn’t go in there and get all crazy,” the 28-year-old native of Bolton, England told the assembled media.

“This win puts me up there to face the biggest names in boxing, the Mayweathers and Pacquiaos. That’s where I’ve always felt I belonged.”

Khan’s promoter says he’s right up there with the two future hall of famers.

“You have Manny Pacquiao, you have Floyd Mayweather, and you have Amir Khan. He’s on their level,” said De La Hoya, the president of Golden Boy Promotions.

“Right now, I’d say that Amir Khan is faster than both Mayweather and Pacquiao. He looked explosive (tonight). Now I know why Floyd Mayweather doesn’t want to fight Amir Khan. I wouldn’t have wanted to fight him.

“With his performance (tonight), he made a huge statement. He shutout a guy who shutout Marcos Maidana, who gave Mayweather a tough fight, and he hasn’t even hit his stride yet. I think Khan is going to get better.”

“Virgil had me in the gym working hard,” Khan said. “At times, I wanted to cheat in my training but I was trapped and they really worked me hard.

Khan is confident that the boxing form he has under Hunter and the strategies the California-based trainer gives him will give Mayweather fits if they ever share the ring.

“It’s time for Mayweather to fight someone with speed, explosiveness and movement. The last time he fought someone like that was Zab Judah (in 2006) and he had a hard time that night.”

However, Mayweather hasn’t mentioned Khan’s name all year. On Friday, pound-for-pound king announced on Showtime that he wants to finally make the elusive mega-bout against Pacquiao on May 2.

De La Hoya said Khan would have to wait his turn if Mayweather-Pacquiao is made, but he doesn’t see that happening.

“If Mayweather and Pacquiao fight in May, then we have to explore option B for Amir because that’s the fight the world wants to see,” said De La Hoya. “But is it going to happen? No, I don’t think so, personally. So what’s Mayweather’s plan B? Can (Mayweather-Khan) happen? Yes, I think so.

“Eventually, those two – Mayweather and Pacquiao – have to fight Amir Khan.”

In the meantime, Khan said he is willing to fight other elite fighters, including RING 140-pound champ Danny Garcia, who knocked him out in 2012, and undefeated IBF welterweight titleholder Kell Brook.

“Yes, I think the Garcia fight was a fight I could have won but I fought the wrong fight,” he said when asked if he was interested in a rematch. “Now I’m a better boxer. I feel better at 28 than I did when I was younger. I’m getting older, but I’m getting stronger. It would be a different fight now, and I think I could dominate him.”

A showdown with Brook, a native of Sheffield, England, was brought up by the British media in attendance. Some UK fight scribes believe Khan could make more money challenging Brook than he could make fighting Mayweather.

“That’s a fight that could possibly happen in 2015,” Khan said of the all-British showdown. “A lot of options are open. I’m going to talk to Golden Boy about my future tomorrow and I’m going to ask for the biggest fights.”

Prior to facing Bundu, Thurman (24-0, 21 KOs) talked about getting the biggest fights in the welterweight division in 2015. However, he didn’t deliver the statement performance he claimed he would against the durable European champ from Italy.

Thurman, who scored a first-round knockdown en route to winning by unanimous shutout scores of 120-107, admitted that Bundu’s quirky style threw him off his usual power-punching style. The 26-year-old contender outboxed Bundu by utilizing stick-and-move tactics that were not appreciated by the crowd of 7,768 inside the Garden Arena.

“His movement was a little awkward and a little frustrating, so I wanted to show him my movement that was awkward and frustrating,” Thurman said. “I should have pushed more for a stoppage and got back to the ‘One Time’ knockout style that fans expected, but I didn’t.

“I love knockouts just as much of the fans, but this is the sport of boxing. I’m here to box and get the knockout that way. I could have moved forward more and thrown my own lead power punches instead of counters but at the end of the day the blueprint was working.”

Thurman said going 12 rounds for only the second time was a learning experience that will help him in future fights.

“I trained hard for Bundu and I wanted to get rounds that would help me evolve as a fighter, as a boxer-puncher. I want to have a long career,” he said.

“I think spoiled the fans. They’re used to the knockouts, and they see me as just a puncher, not as a boxer-puncher.”

Thurman said the knockouts will come against boxers with more orthodox styles, especially aggressive fighters like Maidana, who was ringside.

“I believe Maidana has a better style for me. He comes forward. He has more power than Bundu but he throws wide punches and he doesn’t have as much defense or rhythm. I would look forward to settling down and throwing more with Maidana and I think I can stop him.”

Abner Mares, who stopped Jose Ramirez after five brutally one-sided rounds on the undercard, spoke briefly to the media. Mares (28-1-1, 15 KOs) exchanged body-head combinations with the game but overmatched Ramirez from the opening bell, scoring three knockdowns en route to the stoppage.

It was Mares second victory since he lost his WBC featherweight title via first-round knockout to Jhonny Gonzalez last summer.

“The old Abner Mares is back,” he said. “I think I proved that tonight.

“I wanted to prove to myself that I can take a punch. That wasn’t the plan going in but I wanted to go toe to toe and please the fans. I started boxing more in the later rounds and got results.

“I always start and end (with punches) to the body. That’s the rhythm of my combinations.”

Mares, a three-division beltholder, said he wants a title shot next year and the WBC title held by Gonzalez is the one he wants most.

“I want to fight Jhonny Gonzalez next,” he said. “I want my rematch. I want my belt back. I owe it to the fans. They only got to see half a round (in the first fight).

“But I know (WBC 122-pound beltholder) Leo Santa Cruz is here and that’s a big fight for L.A.”