Tim Bradley and Diego Chaves fight to a split draw 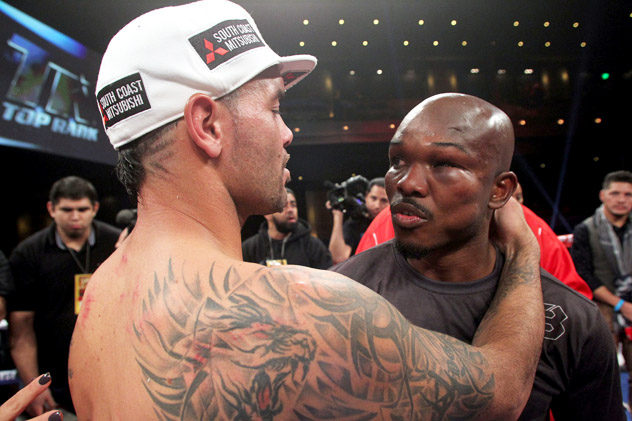 LAS VEGAS – In a wildly entertaining fight that ended with an unwelcome decision, Tim Bradley and Diego Chaves battled to a split draw that capped off one interesting night of judging at The Chelsea inside of the Cosmopolitan.

With already one questionable decision in the bag after Mauricio Herrera lost a highly controversial unanimous decision to Jose Benavidez, the judges once again managed to cast a dark cloud over an entertaining night of fights. The scores of 116-112 in favor of Chaves, 115-113 for Bradley and 114-114 made very little sense to anyone in the building and elicited a cascade of boos embodying absolute bewilderment.

Earlier in the week, Bradley (32-1-1, 12 knockouts) said that he would put his April loss to Manny Pacquiao behind him for good the moment he stepped into the ring against Chaves. And Chaves (23-2-1, 19 KOs) did his part in making sure that the only thing Bradley could think about was getting his head knocked off. However, it appeared Bradley fared well enough in thwarting Chaves’ advances and imposing his will to earn a victory.

After a frantic start to the fight that saw Bradley find success with the very overhand right that he couldn’t seem to land against Pacquiao – coupled with several clashes of heads that caused grotesque swelling on the left side of Bradley’s face – “Desert Storm” slowed things down and used movement and body punching to deposit round after round into the bank. But it wasn’t as if Chaves was simply allowing his opponent to do what he wanted. The hard-hitting Argentine – who we last saw get disqualified against Brandon Rios in a fight many thought he was winning – kept Bradley wary with his right hand and uppercut. But it certainly didn’t seem to be enough to justify the 116-112 score.

Bradley appeared to be simply too fast, too busy and too skillful for Chaves on this night. Although at times he looked wild, Bradley would reset, slip into the pocket and rip into Chaves’ body with hooks that had some impressive velocity. If there was anything that could be held against Bradley’s side, it would be the final two rounds that Bradley appeared to take his foot off of the accelerator. All three judges awarded the eleventh and twelfth rounds to Chaves and, in the case of Craig Metcalfe, caused the 114-114 score.