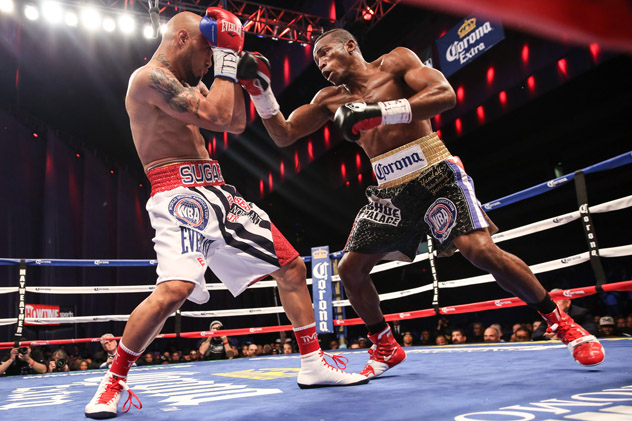 “I want Floyd for my next fight,” said Lara, 31, of Mayweather, who promotes Smith and was in attendance. “He’s the best pound-for-pound, and I want to find the best.”

A former IBF titleholder, Smith was originally scheduled to face the Lara on May 2. Lara instead faced Alvarez, leaving Smith to score a second-round stoppage of Ryan Davis on May 2.

The fighters became tangled in the first round and tumbled to the canvas, although neither was hurt. Lara controlled the round from a distance with his movement, after which Smith followed him to his corner where the two fighters stood forehead-to-forehead and exchanged words.

“I’m an experienced fighter and I know how to read my opponent. I read Ishe in the first round, and I set up my game plan. His body work didn’t affect me,” said Lara, who is trained by Ronnie Shields with assistance from Edward Jackson.

“I trained hard with Jack and Ronnie. He tried to break my concentration with his cheap tactics and dances, but I know how to control myself. I can control my impulses and I don’t let anything get in the way.”

Smith tried to carry the momentum, landing well and heavy to the body early on, although not enough on a sustained basis to win rounds. As the fight wore on and Lara controlled the pace more and more, Smith simply followed as Lara guided him into shots.

In the fifth, Lara taunted Smith, at times standing in front of him with both hands at his side. By the sixth round, Lara had won the approval of the crowd, which chanted his name.

A frustrated Smith, encouraged by trainer and former light heavyweight beltholder Eddie Mustafa Muhammad, attempted to rough up Lara by punching to the ribs during clinches, along with trash talking during and between rounds.

After a while, however, even Muhammad was pleading for Smith to become more engaged and effective. Smith had perhaps his best round in the seventh, hammering away at Lara’s body on occasions when the southpaw lingered on the ropes.

Still, Lara sustained his pace, landing clean counterpunches with both hands. Using his pawing jab and straight lefts and left crosses, Lara resumed and maintained control down the stretch despite absorbing an occasional hammering to the body from Smith.

“I did what I had to do,” said Smith. “We had a great camp and I went out there and let it hang. You win some you lose some. That’s life. Floyd told me to keep my head up and that he’s proud of me.”

Prior to facing Alvarez, Lara rose from knockdowns in the fourth and ninth rounds en route to a 10th-round knockout of Alfredo Angulo in June 2013. Lara’s following fight was last December, when he floored Austin Trout in the 11th round of a unanimous-decision victory.

A 24-year-old southpaw, Pearson was troubled early by the lead right hand from Martinez, who out-landed Pearson, 18-8, in the second round.

In the third round, despite being cut on the left side of his forehead from an apparent head-butt, Martinez continued to be successful to the head and body with double left hooks and uppercuts.

By the end of the round, however, Pearson had begun to back up Martinez. He stepped up the pressure in the fourth, leading off by landing a double right hook.

Pearson carried that momentum into the fifth, where he appeared to be much more relaxed behind straight left hands, chopping rights and an intermittent, solid body attack against an occasionally lunging and fading Martinez.

Pearson had stopped eight consecutive opponents entering his previous bout, a split-decision victory over Lanardo Tyner in February that became a no-contest after Pearson tested positive for a marijuana.

In the second fight, super middleweight Badou Jack (18-1-1, 12 KOs) looked to have won every round before scoring a sixth-round technical knockout over Francisco Sierra (26-8-1, 23 KOs), a 26-year-old who is now 2-5 in his last seven fights.

Against the protests of Sierra, referee Rafael Ramos stopped the beatdown at the 1:58 mark after Jack had landed a double jab and a right to the body, followed by a left hook, overhand right, left-hook combination without any response from his opponent.

Jack and Sierra were both cut by a first-round head-butt, with Jack bleeding from the right side of his scalp, and Sierra, above his right eye.

Trained by former light heavyweight titleholders Eddie Mustafa Muhammad and Lou Dell Valle, Jack, 31, enjoyed a 23-6 advantage in first-round punches over Sierra, whose eye began to swell swiftly as blood poured into it.

Jack nailed and wobbled Sierra repeatedly throughout the fourth round, hammering the body and the head. By the end of the fifth, Jack had an advantage of 61-to-4 in body shots landed against the fading and nearly spent Sierra.

Jack had previously been in action for a unanimous decision over Jason Escalera in August to bounce back from a 61-second stoppage loss to Derek Edwards in February.