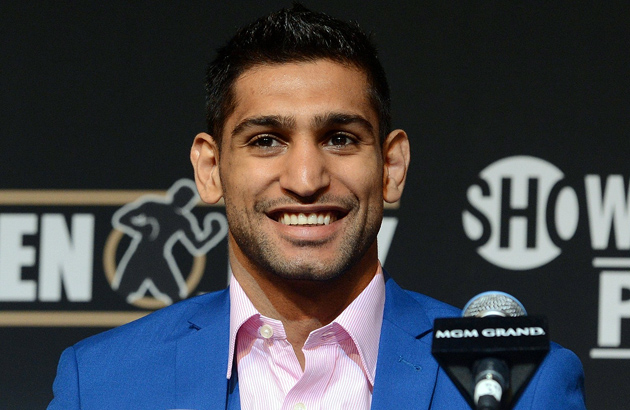 Khan (29-3, 19 knockouts) is coming off a unanimous decision in May over ex-beltholder Luis Collazo, whom he dropped once in the fourth round and twice in the 10th on the undercard of Mayweather’s majority decision over Marcos Maidana.

It had been nearly a year ago this week that Alexander (26-2, 14 KOs) was dethroned as IBF 147-pound beltholder by Shawn Porter last Dec. 7. Alexander was supposed to face Khan rather than Porter but Khan declined, believing Mayweather would elect to fight him in May 2013. Instead, Mayweather chose to face Maidana.

Mayweather also chose a rematch against Maidana in September, this time, winning by unanimous decision. Although the Khan-Alexander winner could be in line to face Mayweather, the RING’s No. 1-ranked pound-for-pound fighter is also reportedly considering a mega-fight with Pacquiao.

“In that case, then you go back to the drawing board,” said De La Hoya of the potential for Mayweather and Pacquiao not being available. “That’s all you can do, and then we’ll plan from there.”

For Khan, the obvious next choice would be Brook, said De La Hoya.

“The first guy that I can think about is Kell Brook,” said De La Hoya of Khan, who ended a 13-month ring absence in his 147-pound debut against Collazo. “I would love a Kell Brook-Amir Khan fight at Wembley Stadium. We would sell the place out.”

Brook (33-0, 22 KOs) also has expressed interest in facing Khan, this not long after having dethroned Porter by unanimous decision in August.

“Amir and I both want the fight, so it’s just getting down to making it happen,” said Brook, 28. “There’s no reason why, after [Khan-Alexander], we can’t fight. It’s going to be an exciting fight. I think we’re just going to stand in the middle of the ring and go to war.”

But with Alexander in front of Khan on Saturday, De La Hoya knows there are no guarantees.

“Saturday night, I don’t know who is going to win,” said De La Hoya. “But I will tell you what. Whoever wins, they’re definitely going to be in the running for a big fight.”

Like trainer Joel Diaz, De La Hoya will be pulling double-duty in Las Vegas, doing so at separate venues that are slightly over a half-mile apart on shows to be televised on two different cable networks.

If things go as planned for Diaz, for example, the trainer will first work the corner of former welterweight beltholder Victor Ortiz (29-5-2, 22 KOs) for his bout against Manuel Perez (22-10-1, 4 KOs) at the MGM Grand that is part of the Showtime Extreme telecast to begin at 7 p.m. ET/PT (delayed on the West Coast).

Later, Diaz will be with two-division titleholder Tim Bradley (31-1, 12 KOs) as he faces Diego Chaves (23-2, 19 KOs) in a welterweight fight – and rebound bout – for both fighters.

Promoted by Top Rank Promotions, Bradley-Chaves will headline an HBO-televised tripleheader at the Cosmopolitan of Las Vegas starting at 10 p.m. ET/7 p.m. PT.

De La Hoya, meanwhile, will begin his night promoting the Khan-Alexander card at the MGM before heading over to the Cosmopolitan, where his junior welterweight, Mauricio Herrera (21-4, 7 KOs), will meet Jose Benavidez Jr. (21-0, 15 KOs) on the Bradley-Chaves undercard.

“I’ll be at the MGM and watch some of the early fights and then, I’ll go to the Cosmopolitan where Herrera is my fighter for when Herrera goes up into the ring. Then, I’ll go back and catch Amir Khan,” said De La Hoya.

“I’ve got my running shoes on. I have the ring times and everything is set. I have security in place, the driver in place, I have worked out all of the timing with production, like when the fighters are walking into the ring.”

De La Hoya said that if time permits, he hopes to be ringside at the MGM for a the Khan-Alexander co-feature between welterweights Keith Thurman (23-0, 21 KOs) and Leonard Bundu (31-0, 11 KOs).

“I hope to catch the Thurman fight, also because I love Thurman,” said De La Hoya. “So like I said, I will have my running shoes on and I’ll be off to the races.”