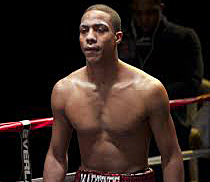 For nearly three years, Steve Martinez has been working himself back to this point. That point is the intersection near the middle of the sport, where two fighters meet adversaries of similar records with a respectable shot at beating the other.

The last time Martinez confronted a similar situation was in January 2012, when he met once-beaten prospect Denis Douglin. The fight was closely contested, with both fighters showing their inexperience and raw talent. In the end, Douglin walked away with the split-decision win.

This Friday, it’ll be Martinez’s turn to be the once beaten fighter facing the undefeated prospect when he meets Christopher Pearson at the Illusions Theater in San Antonio, Tex. in a 10-round junior middleweight bout that will be televised by Showtime.

For the Bronx, New York native, he’s hoping a win can lead him past the threshold to meaningful fights and career advancement.

“This is one of the biggest fights of my career,” said the 24-year-old Martinez (15-1, 12 knockouts). “This is another obstacle down the road to become a world champion. My opponent is a good fighter, he’s talented all-around fighter. He’s undefeated so beating a person like that will get me where I want to be.”

Martinez is accustomed to winning, having won three New York Daily News Golden Gloves and the 2008 National Golden Gloves title at 152-pounds. He turned pro in 2009, running a record of 11-0 (9 KOs) (which ironically is the same record Pearson brings to the ring) before the loss to Douglin.

After winning two more fights in 2012, he spent 2013 on the sidelines figuring out his promotional situation before reemerging in February of this year with new co-promoters – New York-based former prospect Dmitriy Salita and four-division champion Roy Jones Jr. He racked up two technical knockout wins this year on cards in Salita’s home borough of Brooklyn.

“They’re both small promoters, they’ve both been in boxing before. Why not sign with guys who were fighters before and know the business, know the ins and outs of being a fighter and a promoter?” said Martinez.

Pearson, of Dayton, Ohio, too was a successful amateur, winning every title there was in the juniors division before competing briefly in the pro-am World Series of Boxing. He turned pro in 2011 after signing with Al Haymon. Pearson popped up on prospect watch radars in 2013 when he knocked out 14-0 fighter Acacio Ferreira in one round.

Questions were raised after his most recent victory over Lanardo Tyner in February, when Pearson rose off the canvas in Round 6 and found himself too available for the aggressive veteran.

It has taken three years for Martinez to return to this point in his career. A win over Pearson will not only show that he belongs at that level, but that he deserves the bigger fights he craves.

“[Pearson] is slick, he probably got pop in both his hands. When he feels my power, let’s see if that goes out the window,” said Martinez.