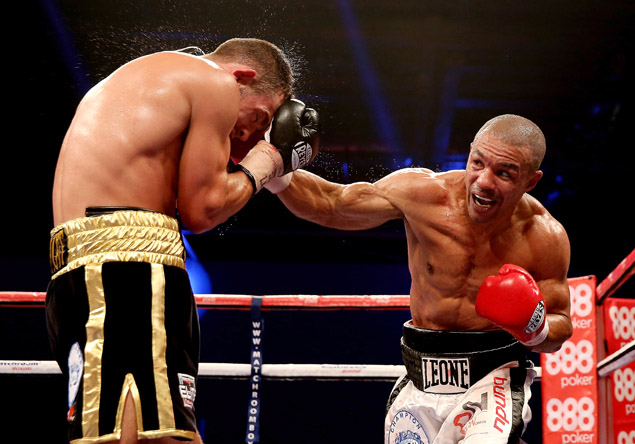 Leonard Bundu will appear to have three strikes against him entering Saturday’s clash of unbeatens against RING No. 7-rated welterweight boxer/puncher Keith Thurman at the MGM Grand in Las Vegas.

Still another disadvantage appears to be the fact that Bundu, a resident of Italy who was born in Sierra Leone, will be fighting on American soil for the first time.

But none of that seems to matter to Bundu, whose bout with Thurman is part of a four-fight Showtime telecast.

“I’m very excited to perform on the American soil, of course. The time difference will not make a difference to me because we will be arriving with about 10 days to adapt. In this fight, of course, I am the underdog. Everybody is looking at me as the lamb to be slaughtered,” said Bundu, during a national conference call with media members last week.

“But I’m here to win, and I’m coming for respect. People don’t give me the respect that I deserve, so I’m coming to prove to people that I’m a tough welterweight, and I will give it all that I have. We box, too, over here in Europe, and we already have European champions who have become world champions. I’m just taking it one step at a time, of course, but, after that, I’ll be ready to fight anybody else. On Dec. 13, I will give it all that I have.”

Promoted by Golden Boy Promotions, the “Royal Battle” card is headlined by former titleholders Amir Khan and Devon Alexander, who are THE RING’s No. 9 and 10 -rated welterweights, respectively.

“For this experience, I didn’t fight in the United States but I was at the Mayweather fight at the MGM in Las Vegas. So I saw what it was like to have been there,” said Bundu, who has scored knockouts in four of his past six victories and has held the European welterweight title since June 2011.

A split decision victory over Frankie Gavin in August in Gavin’s native United Kingdom may have ended Bundu’s run of three consecutive stoppage wins but it also represented his third triumph over a previously undefeated fighter in his past eight appearances.

“I know that I’m going against a very tough fighter and a very good fighter but I feel just as fit and maybe even fitter than I was 10 years ago. I’m really getting better and better with each of my fights,” said Bundu.

“I’ve been reading that Keith Thurman is going to fight this 40 year-old-guy but to me, that 40-year-old guy is not me. I feel as young as he is. I don’t think like an old person. I have a wife and kids but I still go to the gym every day. So I feel fit and I’m prepared.”

Nicknamed, “One Time,” Thurman said he won’t be underestimating Bundu.

“In his last fight, he fought a young man who was 28 years old and fought him in his hometown and beat him. He is a smart boxer and an intelligent fighter and it’s going to be a great fight,” said Thurman, referring to Bundu’s triumph over Gavin.

“It’s interesting, man. A lot of people in the United States don’t know Bundu but we know that the Europeans can box and for him to be an Olympian, he doesn’t feel 40. Age is just a number to him.”

In his last fight in April, Thurman scored his third straight stoppage win in the third round over two-time lightweight titleholder Julio Diaz.

Last December, Thurman scored a ninth-round technical stoppage over Jesus Soto Karass. Prior to that, Thurman earned a 10th-round knockout of previously unbeaten Diego Chaves in July 2013, flooring the Argentine once each in the ninth and final rounds to end his streak of five consecutive stoppage wins.

“Given Keith’s power, I have to adapt and I have to use my intelligence and my tactics. I have experience. I box pretty well. I’m a very instinctive guy, so I don’t like to plan out my fights too much,” said Bundu.

“When I get into the ring, of course, I adapt. I’m not going to trade punches with him but I’ll adapt and put on a good show for sure. I know that it’s going to be my toughest fight but I’m ready to go and to give it my all.”