David Lemieux wows us with his power: Weekend Review 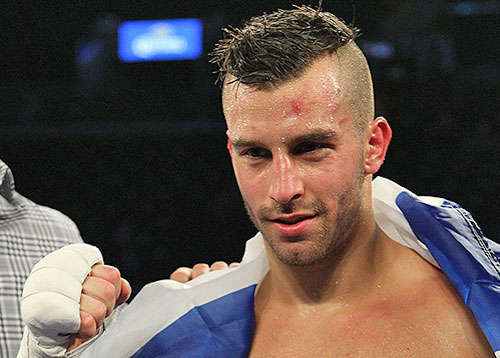 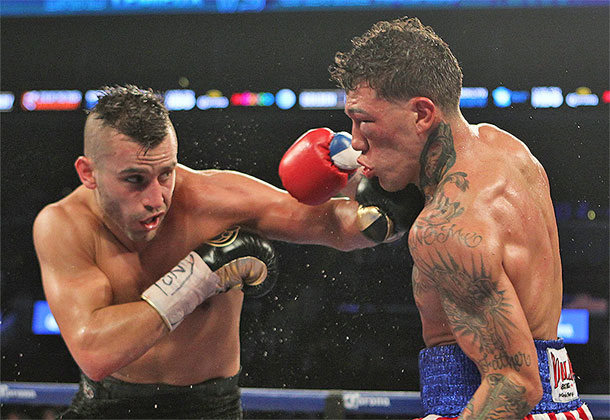 David Lemieux: I don’t know if Lemieux has the all-around ability to seriously challenge the best fighters in or around the middleweight division, proven brutes like Gennady Golovkin, Miguel Cotto and Canelo Alvarez. I do know one thing, though: The French-Canadian has the kind of two-fisted punching power that can change a fight in an instant – as it did early during his victory over Gabriel Rosado on Saturday in Brooklyn – and captivate fans (as well as promoters and TV execs) who drool over big bangers. Lemieux put Rosdao down in the second round but had to settle for a 10th-round TKO, which was more a testament to the Philadelphian’s renowned toughness than the jolt in Lemieux’s punches. Remember: Golovkin never put Rosado down. I don’t know if any other fighter in the sport loads up quite the way Lemieux does, as he obviously intends to mangle his foes with every punch he throws – whether to the head or body. And when they land ÔÇª whew! ÔÇª they do damage and make witnesses cringe. I’m guessing that Lemieux (33-2, 31 knockouts) never makes reputable pound-for-pound lists but, after Saturday night’s explosive performance in his U.S. debut on HBO, I believe he is on many fans’ short list of favorite fighters to watch.

Gabriel Rosado: It’s easy to understand Rosado’s frustration. He had come up short in a number of big fights going into Saturday, demonstrating time and again a willingness to engage but not quite enough ability to have his hand raised in victory. And against Lemieux he seemed to be at his best, boxing well under the recent tutelage of trainer Jesse Reid and stopping Lemieux in his tracks with hard punches a handful of times. And he was never braver, fighting a beast most of nine-plus rounds with one eye shut. Again, though, it wasn’t enough. It wouldn’t be so deflating if Rosado (21-9, 13 KOs) didn’t bring some impressive qualities into the ring. Then he could say, “Hey, I’m just not good enough to fight on this level.” He is good enough, though, at least at times. So what does the future hold for him? I think he can continue to fight on a high level, particularly if he continues to improve under Reid. And he’s only 28. He needs opportunities, though. Rosado is winless in his last five fights – four losses (against Golovkin, Peter Quillin, Jermell Charlo and Lemieux) and a no-contest, which is a miserable stretch in terms of results. He hasn’t won a fight since 2012. How many more chances can he get? I can only suggest this: If he does get one more chance against the right big-name opponent, I won’t be surprised if he finally succeeds.

Pascal vs. Bolonti: The “fight” between light heavyweight contender Jean Pascal and Roberto Bolonti on Saturday in Montreal was declared a second-round no-contest when Pascal punched Bolonti on the break and the Argentine went down and either couldn’t or wouldn’t get up. First, if the fight took place in the U.S., one could argue that Pascal should’ve been disqualified. He clearly threw the right hand after the referee yelled “break” and “no punches” several times. However, rules in Canada evidently preclude a victory by foul in the first four rounds. Plus, a DQ would’ve been predicated on the assumption that Bolonti really couldn’t continue. He took a blow to the side of the head as the two wrestled against the ropes, which left him face down on the canvas. He was rolled over and eventually taken away on a stretcher. Was he truly hurt? Many of those who watched the fight stated with conviction that Bolonti could’ve gotten up but only he knows whether that was the case. Alas, we’re stuck with a weird no-contest and life goes on. Pascal is scheduled to face Sergey Kovalev on March 14 in Quebec. As that fight approaches, no one will really care about what happened on Saturday.

The fourth round of the Lemieux-Rosado fight was epic. Rosado had gone down in the second and seemed to have lost something, which allowed Lemieux to mount a vicious attack in the fourth. Rosado took a number of Lemieux’s best shots and appeared to be in some trouble. Then, Rosado being Rosado, he found the fire to turn the tables on Lemieux by landing his own punishing blows as the fans roared their approval. Suddenly it appeared possible that Lemieux was in some trouble. Then it was the Canadian’s turn. Then Rosado’s once more as the fans rocked Barclays. That’s the kind of round fans never forget. ÔÇª Middleweight Hugo Centeno (22-0, 12 KOs) had a big night on the Lemieux-Rosado card. The lanky Californian appeared to be on his way to a mundane decision over James De La Rosa (23-3, 13 KOs) when De La Rosa ran into a perfect overhand left and couldn’t continue. A one-punch knockout in front of a national audience on HBO is a good night’s work. ÔÇª Junior welterweight Thomas Dulorme (22-1, 14 KOs) and Hank Lundy (25-4-1, 12 KOs) engaged in a spirited fight on the Lemieux-Rosado card, with the Puerto Rican emerging with a split-decision victory. Lundy, a passionate fighter, did well when he got inside against his taller opponent but lost because he stayed outside more than he should have. ÔÇª

Mateusz Masternak (34-2, 24 KOs) remained in the cruiserweight mix by narrowly outpointing Jean Marc Mormeck (37-6, 23 KOs) on Friday in France. Masternak has won two consecutive fights since losing a close decision to Youri Kalenga in June. Mormeck, 42, announced his retirement after the fight. ÔÇª Light heavyweight contender Juergen Braehmer (45-2, 33 KOs) didn’t waste any time against Pawel Glazewski (23-3, 5 KOs) on Saturday in Germany, stopping the Pole in only 43 seconds with a left to the body. Glazewski, who had never fought outside Poland, seemed to be in over his head but it’s hard to tell in less than a minute. ÔÇª Former middleweight titleholder Daniel Geale (31-3, 16 KOs) got back to his winning ways by easily outpointing fellow Aussie Jarrod Fletcher (18-3, 10 KOs) on Wednesday in Australia. Geale was coming off his knockout loss to Golovkin in July. ÔÇª It’s always nice to see nice guy Brian Viloria (35-4, 21 KOs) succeed. The Hawaiian stopped Armando Vazquez (21-12, 4 KOs) in four rounds Saturday in Glendale, Calif. Viloria remains an important flyweight at 34.