Hugo Centeno Jr.: ‘I want to prove I’m someone to be reckoned with’ 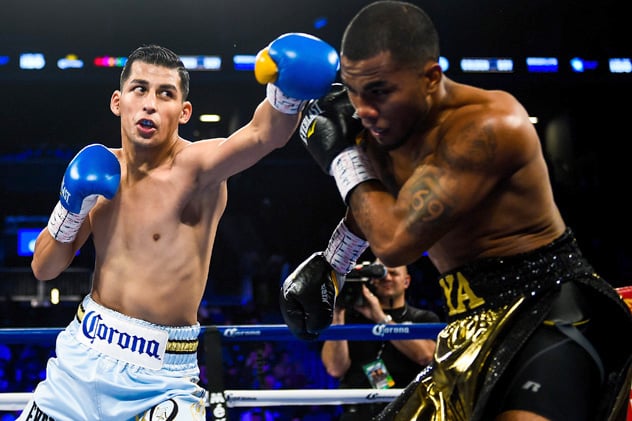 “I feel as if I still have something to prove to others,” said Centeno, 23, during an earlier interview with RingTV.com. “A lot of people haven’t seen my talents or my previous fights. I want to prove to people that I’m here to stay and that I’m someone to be reckoned with.”

Centeno first dropped De La Rosa with a jab out of the orthodox stance, and, later, flooring him for good, face-first, with a left cross out of the southpaw stance.

An excited Centeno barely slept after his victory, staying awake to read the various reports of his triumph on the internet. One report compared Centeno’s execution to an amalgam of Juan Manuel Marquez’s sixth-round stoppage of Manny Pacquiao in December 2012, and that of Sergio Martinez’s second-round knockout of Paul Williams in November 2010.

“I don’t know who wrote it, but I read it online that it was like a combination of the punches thrown by Juan Manuel Marquez and Sergio Martinez, which is a pretty cool combination,” said Centeno, a resident of Oxnard, Calif.,

“So it was just like the timing of Marquez and the the punching power of Sergio Martinez, and they even said that I looked like Sergio Martinez as well. I’ll tell you, I was up all night just reading all of the stories and stuff.”

De La Rosa, 27, has gone 3-3 over the course of his past six bouts, but was coming off a unanimous decision over Alfredo “Perro” Angulo, whom De La Rosa floored in the second round in September.

In this Q&A with RingTV.com, below, Centeno further discussed his victory, which represented his first fight in New York as well as on the East Coast.

RingTV.com: How many hours of sleep have you gotten?

Hugo Centeno Jr.: Probably like two and a half. It was just the type of adrenalin that runs through your body, just from taking in being on such a big stage. I guess that it really didn’t hit me until afterward.

I was watching the Rosado fight, and I came back out and did a few interviews and it just seemed like the Barclays Center was so packed. There were so many fight fans and it was just so packed afterwards.

I was able to accomplish a lot of my dreams last night. I came out big on HBO, and I was able to be announced by Michael Buffer, and, to me, those are all dreams that I wanted to come true, and that’s what happened last night.

RingTV.com: This was also your first fight in New York, correct?

HC: It was. This is my first time ever being in New York, completely. I’m staying here another four days, so I’m going to do some sight seeing a little bit with my girlfriend, Ezra Eusebio.

I believe that we’re going to go to Rockefeller Center, the Statue of Liberty, Ground Zero, and then catch a broadway show, and then, maybe go to Times Square as well.

RingTV.com: Was there anything about the fight that surprised you?

HC: What surprised me was my own power and how strong I am. I was feeling extremely strong for this fight. Even in the locker room before the fight, when I was hitting the pads and warming up, I was telling Coach, Eric Brown, that I was amazed at how strong that I felt.

I have never felt as strong as I did last night, and I could feel that. You know when your body starts to settle in, and you just feel that natural strength coming in, I’m beginning to feel that, now. I think that was the difference, last night, because I surprised myself with that jab in the first round that dropped him right off the bat.

RingTV.com: Did that first round knockdown set the tone?

HC: I think that, mentally, that just showed him and me that I was the stronger one in the fight. That was the first round, so I tried not to get too overconfident, and we had prepared for 10 rounds as he did as well. So I just kept my calm and kept my composure and I was still prepared to fight as if we were going to go the full 10 rounds.

RingTV.com: Can you take me through the motion of the fight-ending sequence and describe, from your standpoint, the landing of the left hand, given that you slipped a jab to throw it?

HC: It was probably like a loopy left hand as a southpaw. I had switched right before he was going throw his jab. It was more reflexes and timing. The fight was getting a little stagnant, and the fans were getting a little restless.

That’s not because I was getting tired or anything, but it was more that I was timing him and wearing him down a little bit. I could see that he was starting to breathe a little harder and to tire as the fight went on. So, it was just more of a timing thing and reflexes.

RingTV.com: Were you surprised at the result?

HC: I expected it to land, but not with as much force and with as much velocity that I had behind it. I was surprised that he went down so hard. I thought that he was a little hurt, and that he was going to go down maybe to one knee.

But I didn’t know that he was not getting up and that the referee had waved it off because I had turned my back and gone to a neutral corner.

So then I turned around and I saw that the referee was waving it off, and I was just in somewhat of disbelief. I expected to out-box this guy and to win a unanimous decision.

That’s what I thought was going to happen, because I knew that James De La Rosa is a tough customer, and he has never been knocked out in his career before last night.

Plus, he was coming off of an impressive, gruesome win over Alfredo Angulo, so, you know, I expected a tough fight, and he’s tough fighter, and I knew that he was prepared to go the full 10 rounds. So I thought that he was going to get back up.

RingTV.com: Having fought at junior middleweight in the past, will you now remain at middleweight?

HC: You know, it looks we might be staying at middleweight, but I have to go back and talk to coach Eric Brown. But I felt extremely comfortable at middleweight last night.

RingTV.com: Do you want to come back to New York?

HC: The flight was more than five hours, but, most definitely, I want to come back. Everyone here was great. The fans, the whole situation. Everyone treated me like I was back in California. I felt like I was back home, so I would love to come back to New York, and I really appreciated them having me here.

RingTV.com: After watching Lemieux-Rosado, how far to you believe you are from competing against a top 10 contender or fighting for a title?