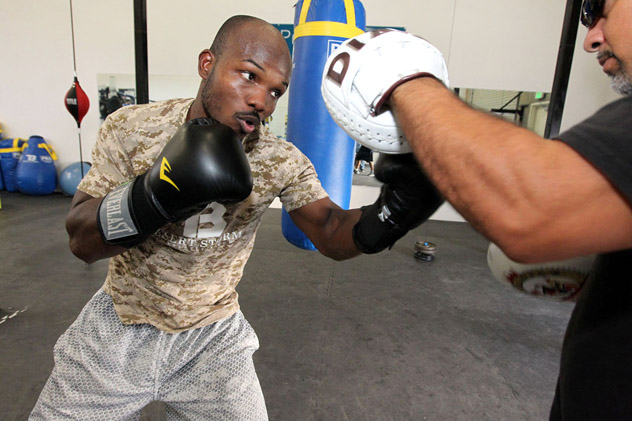 In fact, according to Tim Bradley, Pacquiao has earned it.

Over the past 12 months, Pacquiao (57-5-2, 38 knockouts) has unanimously decisioned Brandon Rios in November 2013, Bradley in April and Chris Algieri last month. In the Algieri fight, Pacquiao scored six knockdowns in defense of his WBO welterweight title. Bradley and Algieri were previously undefeated.

The victories restored Pacquiao’s luster after having been dethroned as WBO titleholder following a split decision loss to Bradley in June 2012 and knocked out in the sixth round in December 2012 by Juan Manuel Marquez, against whom Pacquiao is 2-1-1.

“I think that right now is the perfect time for it because Manny Pacquiao, after suffering that loss in the Marquez fight, the fight with Mayweather kind of went down the drain but the fact that Manny Pacquiao has revamped himself,” said Bradley, against whom Pacquiao regained his title.

“Manny Pacquiao is coming off of two great wins and actually three great wins with myself included, I think that he’s revamped himself. Manny Pacquiao has beaten two undefeated fighters, in Algieri and myself, and he’s beaten Brandon Rios and he’s definitely still a big threat in the sport still and he’s still a top dog and I think that he’ll be tough for Mayweather. I honestly do.”

The buzz for Mayweather-Pacquiao has increased over the past several months.

BRADLEY: ‘I LEARNED A LOT FROM MANNY PACQUIAO’

Pacquiao was riding a 15-bout winning streak that included eight knockouts, had lasted for nearly seven years and was comprised of winning titles over four of his eight total weight divisions when he met Bradley in defense of his WBO 147-pound belt in June 2012.

Bradley’s disputed victory ended all of that.

But over the course of his next two fights, Bradley rose from a 12th-round knockdown to unanimously decision Ruslan Provodnikov in March 2013 and won a split decision over four-division titlist Marquez in October 2013.

Bradley questioned Pacquiao’s hunger for their return bout and uncharacteristically went after the knockout given that had received death threats and pondered suicide as a result of criticism of his disputed win over the Filipino star.

“I went in there with the mindset that I had to knock this guy out in order to win and having that type of mindset threw me off my game. The plan was to out-box Pacquiao and everybody knew it and Pacquiao himself knew it and I didn’t do that. I went straight at him and attacked him,” said Bradley.

“I did have some success attacking him but I think I could have done a lot better if I took my time and tried to out-box him and if it goes to a decision and I lose, then that’s fine. If I stayed true to my form and my abilities and did what got me to the top, I should have been alright in that ring and been OK. But I didn’t do that and got a little out of my context of what I do.”

A two-division titleholder, Bradley (31-1, 12 KOs) plans to be a smarter fighter for his Dec. 13 clash with Diego Chaves (23-2, 19 KOs) of Argentina to be televised on HBO from the Cosmopolitan in Las Vegas.

“I learned a lot from Manny Pacquiao. I learned not to beat myself in the ring and not to be someone that I am not in there. For this fight, I am going back to the drawing board, to what got me to the top. My boxing ability, my speed and using my thinking cap in the ring,” said Bradley.

“In this fight, I’ve just got to do me. Do what got me to the top and continue to do me from here on out. I can’t worry about judges and worry about decisions, just fight the best fight that I possibly can and win the fight and whatever happens after the fight happens, regardless.”

Chaves, 28, is 1-2 in his past three fights and is coming off a ninth-round disqualification loss to Rios in August. Chaves had taken a streak of five consecutive knockout victories into his bout with Keith Thurman, who dropped Chaves twice during a 10th-round knockout victory in July 2013.

“Diego Chaves is no slouch. He has fought some good guys. Keith Thurman and the rugged Brandon Rios. Brandon Rios is always tough for everybody. I heard he was tough in that fight. I know Chaves is primed and ready to fight me. I am one of the best and he wants to beat me,” said Bradley, who had been a vegetarian in the past.

“So I am focused and training camp went really, really well. I have sparred over 150 rounds and I am in tip-top shape. Everyone is wondering if I am on the vegan diet and, no, I am not on the vegan diet for this fight. I am actually eating fish and eating meat and I feel fantastic. I think it should be better. I think I’ll be better off. I am excited about this opportunity.”

BRADLEY: CHAVES ‘IS DIRTY, WE HAVE PREPARED OURSELVES FOR DIRTY TACTICS’

Chaves had been penalized once in the fight and Rios twice before Chaves’ was disqualified by referee Vic Drakulich after the tangled fighters had tumbled to the canvas at the 1:26 mark of the ninth round.

“In training camp, we work on things, intangibles that a lot of other fighters don’t even work on. We prepare for every aspect of what the other fighter is bringing. We know he is dirty and we have prepared ourselves for the dirty tactics and the things that he likes to do. We have stuff to alter that,” said Bradley.

“We know what he likes to do – wrap around, scrape the eyes, hit with the elbows – we are ready for all of that. I am ready to alter that and, hopefully, we have a really good referee in there to take care of the action and to speak to both fighters before we get in there and control the action early on. So, then, Chaves won’t have the opportunity to get dirty.”

Whatever it takes do defeat Chaves, Bradley will do it.