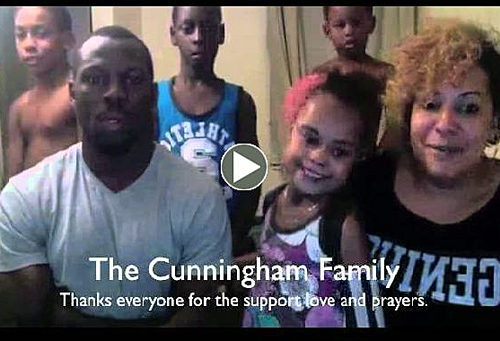 Dr. Victor Morell, the operating surgeon, reported that the heart was placed and beating. About an hour and a half later, Morell confirmed the surgery went well and the risk factors they were concerned with were not an issue, according to the release.

“We are so happy to share that early this morning our daughter Kennedy received the gift of life. She received her new heart and is doing very well. This day is so very special to us and the promise of a better and longer life for our daughter trumps any victory boxing could ever give us,” said Steve and Livvy Cunningham, Kennedy’s parents.

“This is the ultimate championship right here. We would like to thank everyone for their continued prayers and support. And most importantly we send our sincere condolences to the donor family that through their extraordinary selflessness made this day possible for our daughter. We are forever grateful.”

Steve Cunningham (28-6, 13 knockouts) has demonstrated similar courage in the ring, rising from the canvas to win his past to fights.

Cunningham, a 38-year-old veteran who now fights in the heavyweight division, rose from a fifth-round knockdown to defeat Natu Visinia in his last fight in October. Prior to that, Cunningham unanimously decisioned previously unbeaten Amir Mansour in April, rising yet again from two fifth-round knockdowns before dropping his opponent in the final round.

Trained by Naazim Richardson, Cunningham could potentially face Vyacheslav Glazkov (19-0, 12 KOs) on March 14 on HBO, according to Duva.

“That’s one of the possibilities,” said Duva. “HBO wants the fight.”

Glazkov, 30, was last in the ring for last month’s seventh round stoppage of Darnell Wilson.