Hank Lundy is ready to go crazy on Thomas Dulorme 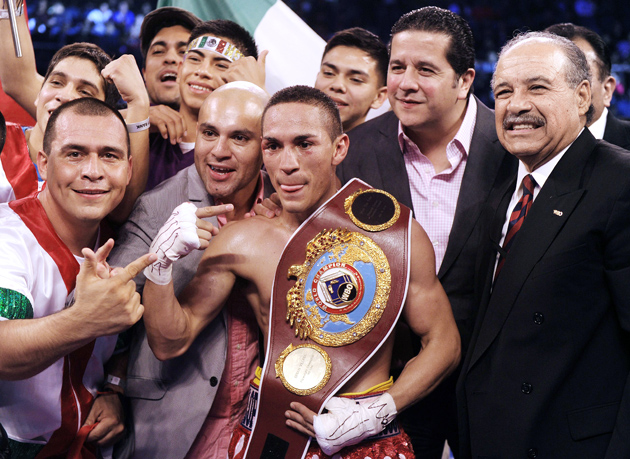 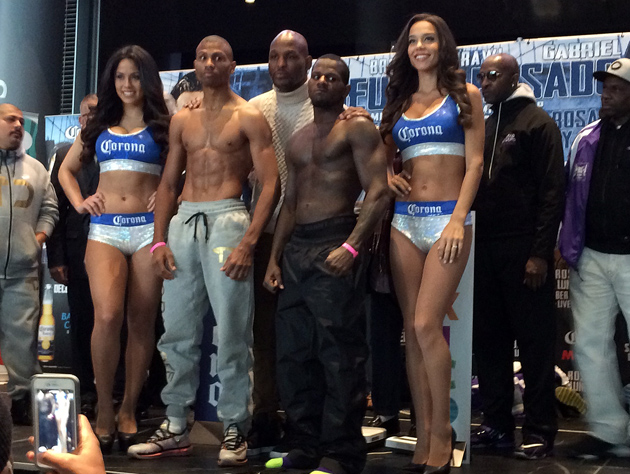 Thomas Dulorme and Hank Lundy pose after their weigh in. Photo by Constantino Garcia / RingTV Instagram

Until one day Lundy’s crazy was measured by someone else’s crazy. Real crazy. It’s what led to his calling. It’s why Lundy feels he’ll smash junior welterweight prospect Thomas Dulorme (21-1, 14 knockouts) in their HBO-televised fight on Saturday at Barclays Center in Brooklyn, New York.

Lundy-Dulorme will be part of a tripleheader with middleweights David Lemieux and Gabriel Rosado in a 12-round main event, and middleweights James De La Rosa and Hugo Centeno Jr. in a 10-round co-feature.

Lundy (25-3-1, 12 KOs), a 30-year-old is a fringe contender, may have the most to gain from the evening. The 24-year-old Dulorme is a former welterweight prospect who is riding a five-fight win streak. The Puerto Rican boxer, who currently holds the NABF 140-pound title, is a very good athlete and technician.

But he won’t out-crazy Lundy.

Not the school-yard version of Lundy, where his boxing life started and where he wants to take this fight. He was a senior in North Philly’s John Bartram High School one day heading out for football practice, when a grown man trying to sneak into the school bumped Lundy hard in the doorway. From a distance the school’s principal, who used to call Lundy “Little Tyson” because he was constantly fighting, saw this and told Lundy to go home.

“After he hit me coming into the school, I waited for the guy afterwards outside in the schoolyard,” Lundy recalled. “The guy was a bully. He thought he was tough because he was older than everybody else. These other guys would back down. I wasn’t. He wasn’t going to intimidate me. We had some words and I wound up knocking him out.”

Lundy later learned how old the guy was – 25! Lundy was 17. Lundy went on to football practice. The guy he stretched stayed there out cold in the schoolyard for an hour. People were walking by him paying little attention like he was road kill on a highway.

“That started it,” Lundy said. “I was a football star at Bartram. I was going to play college football, but my aunt didn’t have the money to send both me and my sister to college, so I let my sister go to school. I told my uncle what I did and he told me he was taking my butt right to the gym. He said they’re not fighting anymore, they’re shooting. I’ve been in the gym ever since then.”

That gave Lundy a “name” in the neighborhood. Beating Dulorme Saturday night would raise his name among the junior welters and possibly set him on a title path.

Lundy has a decent resume. He’s riding a three-fight winning streak, including an easy decision over former contender Ajose Olusegun in July 2013. He followed the Olusegun win up with victories over Angelo Santana (W 10) and Gerardo Cuevas (KO 2) this year. He also has wins over current WBA lightweight titlist Richar Abril, in 2010 when both were rising talents, and faded former WBC lightweight beltholder David Diaz.

But Lundy has been a little uneven, too. He was sloppy and got caught by John Molina in the 11th round in July 2010, when he was up 98-91 on two judge’s scorecards and ahead, 97-92, on the other. He battled contender Ray Beltran, before dropping a majority decision in July 2012, and lost a unanimous decision to Viktor Postol – in the contender’s native Ukraine.

Lundy says he’s learned from those setbacks, that he’s a different fighter, more disciplined and experienced than he was then.

Though there is still a tad of street-wise confidence in Lundy. That’s the edge he feels he has over Dulorme. He also knows a slip here could relegate him to the club circuit. There is a little urgency in Lundy’s tone.

“I’ve always had good hands and I could always fight, but I’ve also learned boxing is a business, too, the politics have kept me down,” Lundy said. “I remember the first time I got hit in the face with gloves on and I was yelling to take them off, we’re about to fight for real. I was always able to fight real well.

“I know what this opportunity is. I get a chance to show the world what I’m all about. I’m not supposed to be where I am now, and I know I’m being looked at as the underdog. I like being the underdog. It’s made me work harder and train harder for this fight. I had around 12 amateur fights going against guys who had hundreds. I found a way to win, like I will against Dulorme.”

Lundy knows Dulorme likes to use his jab, which helped him beat Karim Mayfield in March. But Lundy also feels he can get inside and score.

“That’s my thing, to get inside and punish him,” Lundy said. “I can box with the best of them, and they can look at me as a brawler, but I can box. I know what I’m up against. I know I’m not supposed to win. There is some crazy still left. I have a lot of hate in my heart because I should have been on this stage much sooner – and someone is going to pay.”