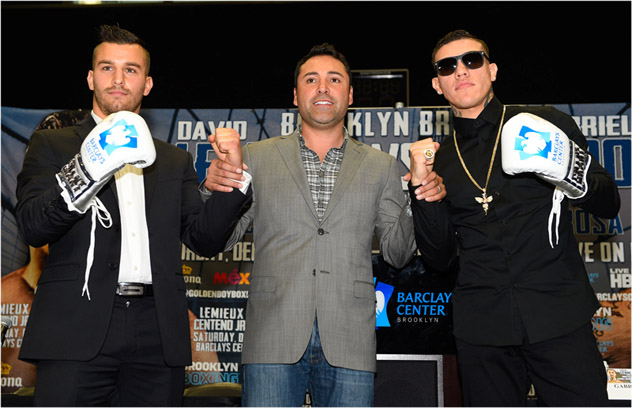 RingTV.com has live round-by-round updates of Saturday’s HBO-televised middleweight clash in which David Lemieux scored a third-round knockdown on the way to a 10th-round technical knockout victory over Gabriel Rosado at Barclays Center in Brooklyn, N.Y.

The 25-year-old Lemieux (33-2, 31 knockouts) is riding an eight-bout winning streak, seven by knockout after his middleweight clash with Rosado (21-9, 13 KOs), a 28-year-old who has gone winless in his past five bouts, four of which were against undefeated fighters.

Lemieux was coming off a resounding victory over former title challenger Fernando Guerrero, dropping the southpaw four times en route to a sensational third-round stoppage in May.

Rosado, meanwhile, had goin without a victory against unbeaten boxers over the course of his previous four bouts, being bloodied and stopped in two title challenges, suffering a disputed split decision loss-turned-no-decision in a third bout and losing by a wide unanimous decision in the fourth.

In January 2013, Rosado lost via bloody seventh-round stoppage to WBA middleweight titleholder Gennady Golovkin, ending his run of seven straight victories, five by knockout. In May 2013, Rosado lost a split decision in to J’Leon Love that became the no-decision after Love failed his post-fight drug examination.

In October 2013, Rosado rose from a second-round knockdown and was very much in contention en route to a 10th-round TKO loss to then-WBO middleweight titleholder Peter Quillin, a fight that was halted due to a severe cut over Rosado’s left eyelid.

After those three fights as a 160-pounder, Rosado returned to 154 in January, only to be cut yet again over the left eye during a one-sided unanimous decision loss to Jermell Charlo.

The HBO broadcast begins at 10 p.m.

Gabriel Rosado enters the ring first wearing a red, white and blue, star spangled outfit befitting his Puerto Rican heritage as well as the flag of that nation and the American flag.

REFEREE STEVE WILLIS STOPS THE FIGHT AT THE 1:45 MARK OF THE 10TH ROUND, LEMIEUX WINS BY TECHNICAL KNOCKOUT!!!!

Round 3: Fighters have both landed 37 punches through the first two rounds. HBO’s Steve Weisfeld has it even, 19-19. Uppercut by Rosado, and another both with his right hand. Jab by Rosado. Hard left hook wobbles Rosado. Right by Rosado. ROSADO DOWN FROM A LEFT HOOK. HE’S ON ONE KNEE. Rises at the count of six. Rosado clinching to stay alive. Rosado appears to be cut over the left eye yet again and taking punishment along the ropes. Hard right by Lemieux and lefts and rights to the head and body. Rosado’s left eye is closing swiftly. Lemieux pounding to the head and body, finding the left hook frequently. Lemieux, 10-8; Even 28-28

Round 4: Lemieux is pounding away early after landing 29 power shots in the previous round. Rosado is game, lands a right, but Lemieux comes back with his own left hand. Big uppercut by Rosado, right by Lemieux. Another right by Lemieux and a left. Double-left hook to the body and then another to the head by Lemieux. right and left by Rosado. Rosado has Lemieux on the ropes and then gets caught with a left hook that wobbles Rosado yet again. Great action, but Lemieux’s shots carry more of an effect. Lemieux gets nailed with a right and a left and another right hand. Rosado gets the better of the end of the round. Lemieux, 10-9; Lemieux, 38-37.

Round 10: Weisfeld has it 88-82 for Lemieux, who still has Rosado hurt from the previous round. Rosado sent reeling from a head-swiveling right hand early and from behind an all out assault by Lemieux. One-sided round early. Referee Steve Willis appears to be getting close to stepping in. Hard right hand by Lemieux, left, right, left by Lemieux. DOCTOR BARRY JORDAN IS ON THE RING ROPES, WILLIS RESPONDS TO THE DOCTOR, ENDS THE FIGHT AT THE 1:45 MARK!!!!