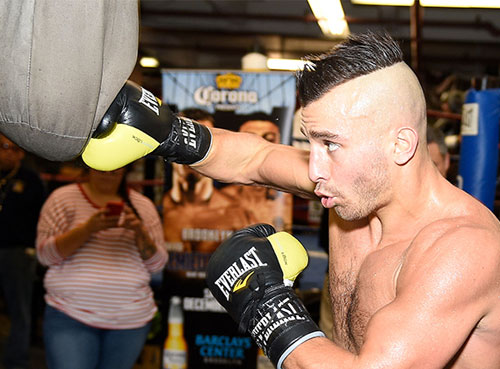 BROOKLYN, N.Y. – David Lemieux has knocked out 30 of 34 opponents but it might be his worst moment – a brutal knockout loss in 2011 – that led him to where he is today.

Lemieux doesn’t want to dwell on his ill-fated meeting with rugged Marco Antonio Rubio or what preceded it. “Waste of time,” he said at famed Gleason’s Gym, where he was preparing to make his U.S. debut against Gabriel Rosado on Saturday at Barclays Center.

He revealed enough to illustrate past frustration, though. In a few words: He doesn’t believe he had the training necessary to succeed on the highest level.

“I wasn’t prepared with the team I had,” he said. “ÔÇª I didn’t have the structure for a fight like that. I’ll just say this: The maximum number of rounds I sparred before that fight was approximately seven. That’s all. Now I have regular 12-round sessions.

“ÔÇª It opened my eyes. I see a lot of things with my (current) team that I didn’t see before. I look back now and think, ‘What was I thinking back then to be in that situation?'” 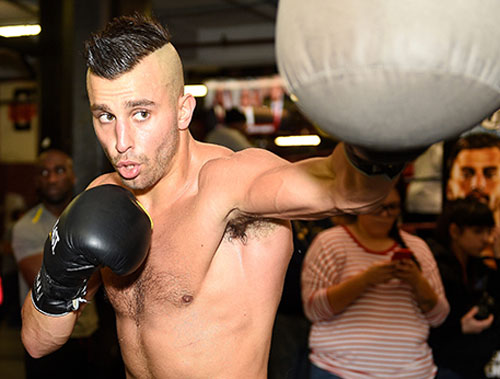 Change was in order, he decided. He hired manager Camille Estephan, replaced longtime trainer Russ Anber with Mark Ramsey and began working with a fitness coach for the first time.

Lemieux lost the fight immediately following Rubio, a disputed decision against Joachim Alcine that seemed to perpetuate his nosedive. However, it was more of a blip than a disaster.

Since then, he is 7-0 with six knockouts. That includes a beastly third-round stoppage of contender Fernando Guerrero in May, powerful evidence that the big-punching middleweight from Montreal is back and probably better than ever.

“I think he was in a tough situation,” said Ramsey, referring to the period leading up to the Rubio fight. “He went from facing maybe ‘C’ fighters to a guy like Rubio. There was no transition between the two levels of fighters. And he was very young [22]. Now he’s a man, a lot more mature.

“And he came from a gym where he was king; he was never really challenged by anybody. That’s not the case anymore.”

“When you spar with Jean Pascal, you’re not going to knock him out in six rounds,” Ramsey said. “You have to deal with boxing technique for 12 rounds against a tough guy who is two weight categories over him and has a very good chin.

That type of experience is one reason Lemieux is brimming with confidence.

In the final moments of the Rubio fight, which ended in the seventh round when Anber stepped in to protect his beaten fighter, Lemieux had a look of confusion in his eyes. At Gleason’s, when he discussed the challenge he faces Saturday, he had the look of what Estephan called him: “A predator.”

This version of Lemieux has big plans. He and his handlers can envision him in the middleweight mix with the likes of Canelo Alvarez, Miguel Cotto and, Esephan said, “Gennady Golovkin eventually.”

The fight on Saturday would be a big step in that direction.

Lemieux has never fought in a main event on HBO, one of the biggest, pressure-packed stages in the sport. And he’s fighting for the first time outside the comfortable confines of Quebec, his home province.

He seems to be excited, not particularly nervous, but we won’t know whether he can handle a fight of this magnitude until we see it.

The fact he doesn’t seem to be taking victory for granted is a good sign. He knows that Rosado is seen by many as a durable “opponent,” the type of boxer who will fight his heart out but generally fall just short in big fights.

Lemieux won’t allow himself to see Rosado that way. However, he expresses his respect for his opponent with a gleam in his eye and a knowing grin that says he means business.

“I don’t underestimate Rosado,” he said. “I see him as a dangerous guy. I really believe he’s better than his record shows. And he’s a tough guy, very durable. We did what we had to do, though. We’re ready; we have a plan. It’s time to walk the walk.

“Brooklyn isn’t the same as Montreal but the results will be the same in the ring.”