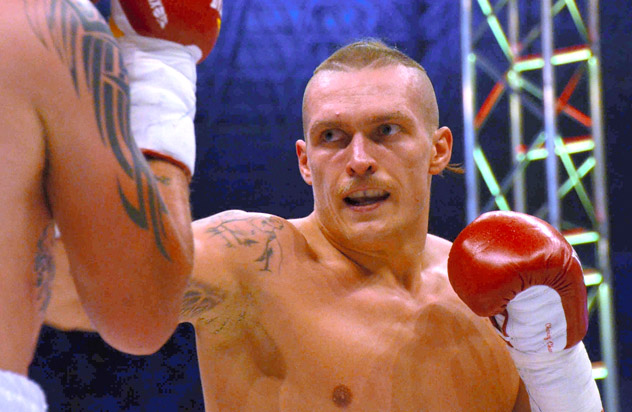 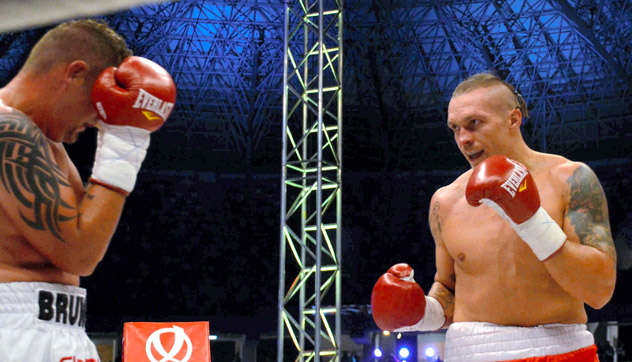 Oleksandr Usyk (R) faces off with Daniel Bruwer on Oct. 4, 2014, in Ukraine. Photo by The Asahi Shimbun/Getty Images.

A 27-year-old southpaw who stands 6-foot-3, Usyk (5-0, 5 knockouts) was last in action for a seventh-round knockout of Daniel Bruwer in October.

“Training was terrific,” said of Usyk, who spent two weeks sparring with three-time title challenger Ola Afolabi. “I learned a great deal sparring with Ola. He’s one of the very best cruisers in the world, and it was a tremendous experience. I’m getting better with each bout, and looking to close out 2014 in style.”

Usyk has also been part of training camps this year with RING/IBF/WBA/WBO heavyweight champion Wladimir Klitschko (62-3, 52 KOs), who knocked out previously unbeaten Kubrat Pulev in the fifth round last month.

“The sparring sessions between Oleksandr and Ola were terrific and a very strong learning experience,” said Alexander Krassyuk of K2 Promotions. “This has been a tremendous year of growth of Oleksandr, and we’re looking toward an outstanding 2015 for him. Defeating Venter … would be a excellent way to finish his 2014 campaign.”

The 35-year-old Venter (19-6, 14 KOs) has won four straight fights, three of them by knockout, since being stopped in the fifth round by Thabiso Mchunu in November 2012.