Zachary Ochoa returns to ‘my house’ at Barclays Center 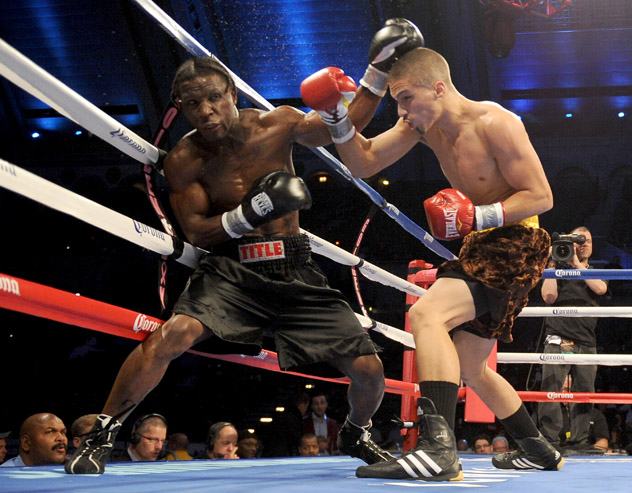 Before ever entering the boxing ring, Zachary Ochoa did his brawling in the streets, growing up in the Williamsburg neighborhood of Brooklyn, N.Y.

“I was no stranger to trouble when I was younger,” said Ochoa, who was arrested for street fighting at the age of 16. “I would get into fights all of the time, and eventually it got to the point where I realized that I had to make some serious changes.”

In returning to Barclays, Ochoa is back where he won his last bout, a six-round unanimous decision over Luis Cervantes.

“I felt great after my last fight at Barclays. I got a lot of experience fighting a tough guy like that. I felt good, and I learned a couple of things in that fight,” said Ochoa.

“Stuff like to fight the way that I fight, not to come out to fast, and to concentrate on the goal and on the task. Looking back, even when I watch it now, it was a fun fight.”

Ochoa’s first fight at Barclays was his fourth as a pro: a unanimous decision over Calvin Smith in April 2013 that ended his own run of three consecutive stoppage wins.

“I feel that it’s going to be just another great experience for me in my fourth time fighting at Barclays,” said Ochoa. I’m happy that everybody is coming out and showing me support, because whenever I fight there I always sell out all of the tickets that I have. So this is just another fight at my house.”

Castro, 27, has won three straight since falling by second-round knockout to Angel Velazquez and is coming off last month’s disqualification victory over the winless Raidy Martinez.

Ochoa will be competing in his fourth fight of the year, having signed with Golden Boy in January.

“Golden Boy has done an amazing job since I’ve signed with them, and I’m happy with the progress of my career. They’re helping me to get better and to grow as a fighter, and I’m getting more comfortable in the ring,” said Ochoa, who is trained by Kelly Richardson.

“When I’m 15-0, or whatever, I’ll do whatever they say to step up and I’ll be ready for it. It’s a wonderful thing to have them building my brand and building my record up as a fighter. So for right now, they’re doing an excellent job. They’re taking me to the top.”

EDDIE GOMEZ LOOKS TO BOUNCE BACK VS. JAMES WINCHESTER

Also appearing on the card will be junior middleweight Eddie Gomez, whose last appearance at Barclays Center, in January, was a unanimous decision over then-unbeaten Daquan Arnett, whom Gomez floored in the seventh round of his first-ever 10-round fight.

Gomez is 4-0 with two knockouts at the venue.

In his very next fight, however, the Bronx native lost a unanimous decision to Francisco Santana at Fantasy Springs Casino in Indio, Calif.

“A lot of things didn’t go in my favor in that fight. Mentally, I wasn’t there. Training, I wouldn’t say that it was one of my best camps, because I really didn’t have good sparring,” said the 22-year-old Gomez (16-1, 10 KOs). “So, in a lot of ways, me not having the good sparring, that took away a lot of things that I bring to the ring on a regular basis.”

On Saturday Gomez will face James Winchester (16-6, 10 KOs), a 36-year-old who is 1-6 with only one stoppage in his past seven fights. He was last in action for a unanimous-decision loss to Terrell Gausha in June.

“I had a lot of stuff going on, and that took a big toll in my last fight,” said Gomez. “So, right now, for this fight, I’m looking to get back to my winning ways and doing what I have to do.”

The following are the past eight boxing events hosted by Barclays Center and promoted by Golden Boy: