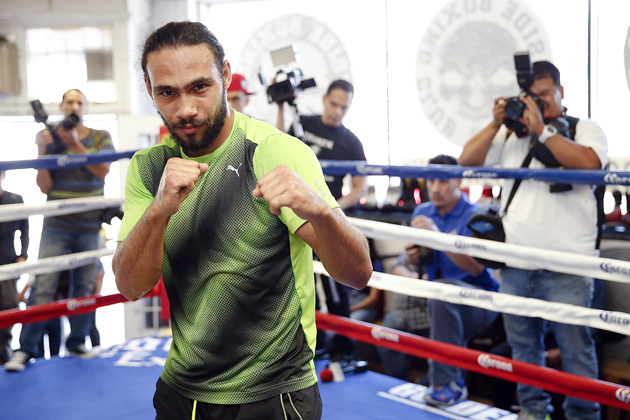 There will be at least three quality welterweight bouts taking place in Las Vegas on Dec. 13 and Keith Thurman has vowed to be the one who makes the most emphatic statement.

Promoted by Golden Boy Promotions, the “Royal Battle,” the card is headlined by former titleholders Amir Khan and Devon Alexander, who are THE RING’s No. 9 and 10 -rated welterweights, respectively.

On the same night, RING No. 2-rated Tim Bradley will fight Diego Chaves in a welterweight bout at the Cosmopolitan in Las Vegas, an event being handled by Top Rank Promotions.

“When you’ve got that many welterweights performing on the same night, you know, there’s going to be a lot of talk. You know that Twitter and all of the social media is going to go crazy at around midnight and I’m looking forward to it,” said Thurman, 26.

“I’m just really happy to be getting back into the ring. I’m really happy to showcase my skills and my talents once again…Overall, I do put it in my head and into the back of my mind that not only do I want to win but that I would like to outperform every welterweight that steps into the ring that night.”

A resident of Italy who was born in Sierra Leone, Bundu, 40, will be fighting on American soil for the first time against Thurman. Bundu has scored knockouts in four of his past six victories and has held the European welterweight title since June 2011.

Thurman implied that he is attempting to avoid what happened to previously unbeaten RING No. 6-rated Shawn Porter, who was dethroned as IBF beltholder following a majority decision loss to No. 4-rated Kell Brook of England in August.

“I’m extremely excited to be going up against an undefeated fighter who was an Olympian, who will present a European style. We have seen the the skills that Kell Brook brought to the table when he fought Shawn Porter,” said Thurman.

“It’s interesting, man. A lot of people in the United States don’t know Bandu but we know that the Europeans can box and for him to be an Olympian, he doesn’t feel 40. Age is just a number to him.”

A split decision victory over Frankie Gavin in August in Gavin’s native United Kingdom may have ended Bundu’s run of three consecutive stoppage wins but it also represented his third triumph over a previously undefeated fighter in his past eight appearances.

“In his last fight, he fought a young man who was 28 years old and fought him in his home town and beat him,” said Thurman of Bundu. “He is a smart boxer and an intelligent fighter and it’s going to be a great fight.”

In his last fight in April, Thurman scored his third straight stoppage win, doing so in the third round over two-time lightweight titleholder Julio Diaz. Nicknamed “One Time,” Thurman has stopped 11 of his past 12 opponents.

Last December, Thurman scored a ninth-round technical stoppage over Jesus Soto Karass. Prior to that, Thurman earned a 10th-round knockout of previously unbeaten Chaves in July 2013, flooring the Argentine once each in the ninth and final rounds to end his streak of five consecutive stoppage wins.

Had it not been for a left shoulder injury suffered since his victory over Diaz, Thurman said his plan was to have been more active than just the one fight in 2014.

“In boxing, you never know what you’re gonna get. This year, my body did not allow me to fight three times as we had planned. I had to do a layoff in camp. My left shoulder wasn’t feeling great. I went through six weeks of physical therapy,” said Thurman.

“And then we continued to do the advice that the doctors said. It’s feeling great. You guys know how much I love to throw that left hook of mine and I’m just really looking forward to getting back. I am a little disappointed. We had to brush off some of the dust but on Dec. 13, we’re back in action and I’m excited.”