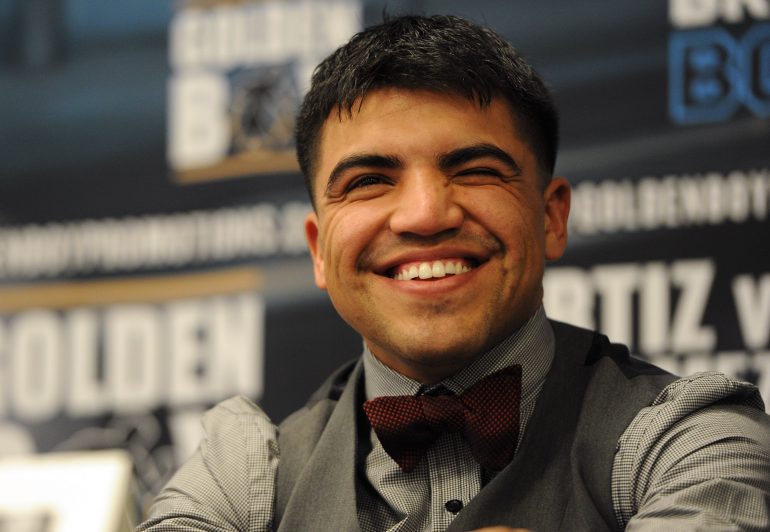 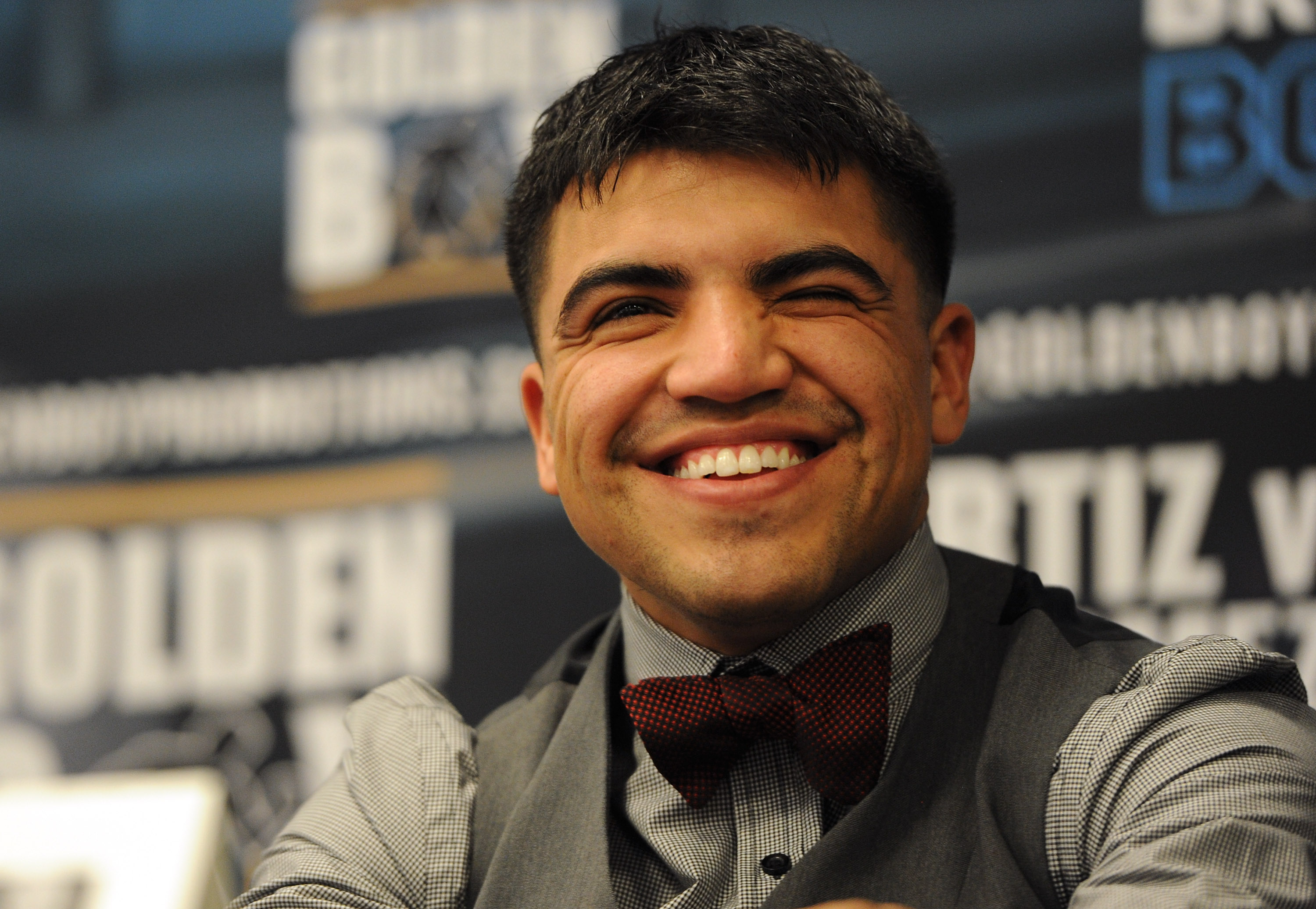 Former welterweight beltholder Victor Ortiz has been training with Joel Diaz and two-division titlist Tim Bradley in preparation for a Dec. 13 fight with Manuel Perez at the MGM Grand in Las Vegas.

Ortiz (29-5-2, 22 knockouts) will be ending an 11-month ring absence in only his second fight in the past 30 months against Perez (22-10-1, 4 KOs) on a deep card that has been dubbed “Royal Battle,” headlined by former titleholders Amir Khan and Devon Alexander in a welterweight bout.

“I’ve been with him now for seven years or something like that and I think that he’s got a lot left. He’s still a young man who is only 27 years old,” said Joseph Janik, Ortiz’s longtime strength-and-conditioning coach. “He won’t be 28 until the end of January, so, physically, he feels good and looks good. I think that he’s had a couple of rough fights but really, not too many.”

Ortiz was last in action on Jan. 30, having been knocked out by fellow southpaw and former titleholder Luis Collazo in the second round the day before Ortiz’s 27th birthday.

Ortiz was dropped and stopped by a left cross from Collazo, an fight which ended a 19-month ring absence. Prior to the Collazo bout, Ortiz had been cast for a role in the third installment of Sylvester Stallone’s “The Expendables” and participated in “Dancing with the Stars” during his time away from the sport.

Ortiz had previously been in action in June of 2012, when he suffered a ninth-round stoppage loss to Josesito Lopez after which he required a two-hour surgery to repair a broken jaw.

But Ortiz has been going to war since June of 2009, when he was dropped twice during a fight in which he scored three knockdowns of his own before suffering a sixth-round stoppage loss to Marcos Maidana at junior welterweight.

“The Maidana fight was a little rough and maybe the Josesito Lopez fight with the broken jaw,” said Janik. “But other than that, he hasn’t been in any grueling wars, so I think that, for the most part, he’s pretty fresh.”

Ortiz then reeled off four straight wins, three by stoppage, including a third-round knockout of ex-beltholder Vivian Harris in September 2010 that followed a unanimous decision win over former titleholder Nate Campbell in May of that year.

Following a majority draw with current IBF 140-pounder beltholder Lamont Peterson in December 2010, Ortiz debuted as a 147-pounder and dethroned Andre Berto as WBC titlist by unanimous decision. There were four knockdowns in Ortiz-Berto – two scored by each fighter.

In his next fight in September 2011, however, Ortiz lost the belt by fourth-round knockout to Floyd Mayweather Jr. before facing Lopez.

“Victor’s got a lot on his plate, which a lot of fighters don’t have, so I think that might have been a little bit of a distraction at one point. But I think that getting back with a new trainer in Joel Diaz is a blessing in disguise,”‘ said Janik.

“He and Joel have a good relationship and Joel seems to be pulling things out of him that we haven’t seen in a while. So hopefully the fans will be in for a treat and we can get on a nice little run for the next few years.”

Ortiz briefly shared his thoughts with RingTV.com in the following Q&A.

RingTV.com: How is training with Diaz?

Victor Ortiz: Training camp has been great. I have just been open-minded to anything that he’s got to say as far as correcting some of the mistakes that I’ve had.

So it has been just that with anything that he’s got to say, I’m an open mind. It’s been great. I’ve been in Indio, Calif. with Coach Joel Diaz and Timothy Bradley.

Everyone has been great and has welcomed me with open arms. We’ve just been working at it and we’ve been working hard.

RingTV.com: What sort of mistakes are being corrected?

VO: I will let the world decide on that when they see me on Dec. 13.

RingTV.com: What does it do for you being around a guy like Bradley?

VO: It has absolutely been great. I have a lot of respect for Timothy Bradley. He’s a little older than I am and I understand him when he’s got something to say.

I’m like a sponge and I can sit back and really appreciate what it’s like being around a champion like himself. There’s no sparring going on between us; we’re just supporting each other.

He comes and supports me in my training and I come and support him during his training. I’ve been there for maybe a total of 12 weeks now, so it’s been perfect at this point.

RingTV.com: What happened in the second round against Collazo, a fight many thought you would win?

VO: I actually thought I was going to win that fight as well but guess what? I didn’t lose to a chump; I lost to a guy who was a champ himself and he had his day.

Beyond that, anything that is said about me is not relevant to me, so I’m not living in the past. I’m living in my present, right now, and that’s how it will be for the next two weeks.

RingTV.com: How much desire do have left in terms of physical ability and desire to fight?

VO: Look, I’m 27 years old. I’m still in my prime. People said that I walked away from boxing and that I should hang it up and this and that but it all goes back to what I want.

I will say when it’s time but at this point in time, I’m in my prime; I’m 27. The other thing is that, not only that but I’m healthy and I turned down two movies to go back to the ring.

I didn’t have to do that but I love my sport and I love what I do and I’m not washed-up. I have a lot left in me. We’re still working on a movie called “211” and we’ll go back to that after the fight.

There’s also another one in the mix right now and I’m waiting to hear back from them. But at this time, they know that I’m fully focused on winning this fight, so no one’s really contacted me on that. I’ll handle all of that after the fight.

RingTV.com: Your thoughts on your performance in Expendables 3?

VO: I’m not the type of person who calls all of the shots in that kind of an industry. I’m new to everything, so I’m very blessed and fortunate to be part of anything.

RingTV.com: How difficult is the transition back to boxing from making a movie with icons from the industry?

VO: The difficulty is one and the same, pretty much. You have to focus and work hard and you can’t really slack off, just like in boxing. There are a lot of equivalents between boxing and making movies and I’m just fortunate to be a part of both right now.

RingTV.com: What do you know about your opponent, Perez?

VO: It’s Manny Perez but it doesn’t really matter. I’ve been working really hard and trusting whatever my team has to say and I’m preparing as they say and that’s that.