Jean Pascal: Sergey Kovalev fight ‘was an easy one to agree on’ 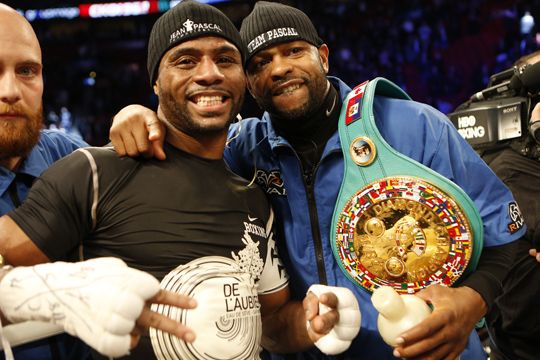 Jean Pascal wanted to fight Adonis Stevenson at one point and so did Sergey Kovalev.

The agreement is contingent on two things, one being approval by the IBF given that Kovalev’s mandatory challenger is Nadjib Mohammedi, who is also promoted by Main Events. The other is Pascal must win his upcoming bout with Roberto Feliciano Bolonti on Saturday at Bell Centre in Montreal.

Pascal, 32, is willing to pass up his position as the mandatory challenger to the WBC belt owned by Stevenson (24-1, 20 KOs), his countryman, who is scheduled for a Dec. 19 date with Russian Dmitry Sukhotsky in Quebec City.

In anticipation of Stevenson-Pascal, however, the Bell Centre in Montreal had been placed on hold on for a potential April 4 showdown, according to Stevenson’s promoter, Yvon Michel.

“Earlier discussions have also focused on both of our unsuccessful attempts to close a deal with Adonis Stevenson,” said Pascal of Stevenson, the current RING champion.

“What Sergey and I both concluded is that it takes two willing fighters to reach a deal. We have done exactly that, in keeping with our mandate as fighters, willing to fight the best to be the best.”

Stevenson, 37, already had lost an opportunity to unify the division with Hopkins to Kovalev. That scenario is another in a strange turn of events, which origin was in March, when Stevenson bolted for Showtime from network rival HBO presumably to pursue a shot at Hopkins.

Ironically, in August, Hopkins detoured from Showtime for a unification fight with Kovalev.

“Over the last few weeks, Jean Pascal Promotions and Interbox have been in negotiations to fight Sergey Kovalev. Sergey and his team have struck a deal with us to make this fight happen for the fans,” said Pascal, whose promoter is Jean Bedard of Interbox.

“My manager was quoted earlier saying that this is the best possible high-profile fight that can be made in the light heavyweight division. To be perfectly honest, the fight was an easy one to agree upon. Sergey and I are both interested in fighting the best, so the terms have already been set.”

Having won his first fight under trainer Abel Sanchez, a first-round stoppage of Demetrius Walker on Nov. 8, Mohammedi is willing to pass up his chance to face Kovalev for a spot on the Kovalev-Pascal undercard and eventually a potential shot at the winner, according to his co-manager, Vince Caruso.

“Yes, we will be on the undercard. The reason we did not push for the IBF title fight with Sergey now is for a couple of reasons. First, Nadjib has just made a complete overhaul of his personnel. This will be his first fight under new trainer Abel Sanchez and his first training camp outside his native France. So in order to fully utilize Abel’s knowledge, we need more than 90 days. Second, we are a realistic team and the reality is Nadjib is still unknown to mainstream boxing audiences,” said Caruso, who advises Mohammedi with Jon Ali.

“We generated a bit of buzz lately but we are still short on making him a household name in boxing circles. Do I think we can get him in the same sentence as a Kovalev or Stevenson? Absolutely. But right now, we’re still writing the book. On March 14, Nadjib Mohammedi will come out of the dressing room for the last time as a contender because as hard as he works and as bad as he wants that IBF world title, I know nothing will stand in his way. Nothing.”

Main Events CEO Kathy Duva said Kovalev-Pascal is to be televised on HBO in the United States and pay-per-view in Canada.