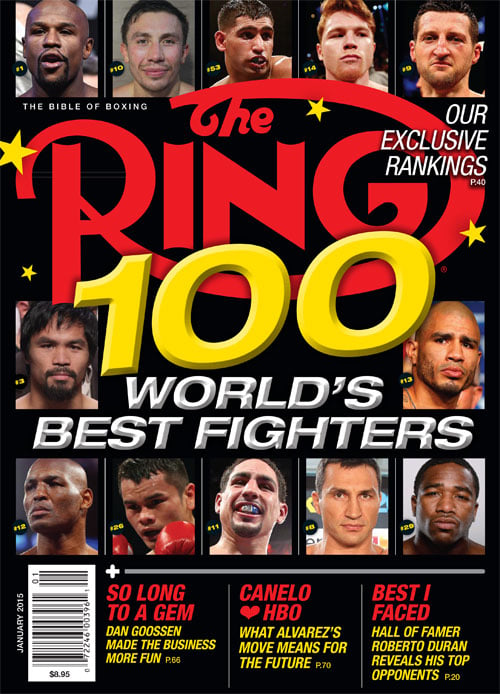 The January 2015 issue of THE RING Magazine is on newsstands now. Don’t know where to find a newsstand near you that sells THE RING Magazine? Click here. To subscribe ÔÇö both to the print and digital versions ÔÇö click here. You can also purchase the current issue on that page.

Who are the best fighters in the world?

THE RING 100, one of the most popular features in the magazine, is the focus of the January 2015 issue, which is on newsstands now.

In the annual feature, we rank in order the best 100 boxers in the world and provide synopses of where they stand in their careers. Plus, we include several sidebars to give a more complete overview.

The package was put together this year by diligent contributors and boxing gurus David Greisman, Martin Mulcahey and Anson Wainwright, who exchanged countless thoughts for a number of weeks before settling upon a final list. Greisman did the writing.

Our hope is that THE RING 100 serves as a starting point in any discussion about the best fighters on the planet. ÔÇª

Among other stories, guest columnist Steve Springer looks back on the life and career of the late Dan Goossen, a longtime promoter who made the boxing business more fun, in Dreams Do Come True. ÔÇª

In Points of Contention, contributor Norm Frauenheim writes about the strategy referees use – or should use – in deducting points for rules violations. ÔÇª

And historian Randy Roberts looks back on the tragic story of onetime Muhammad Ali opponent Alejando Lavorante in The Demise of a Contender.

Also in the January issue: