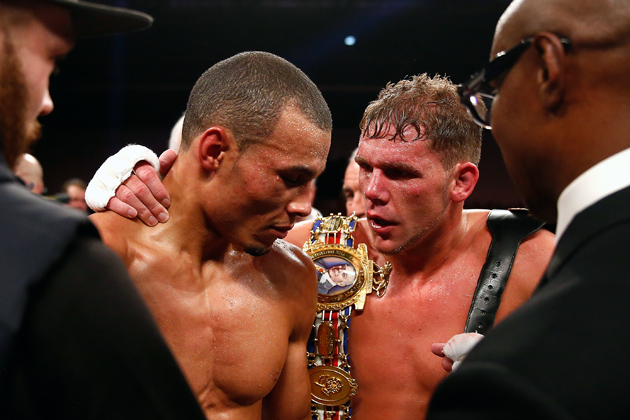 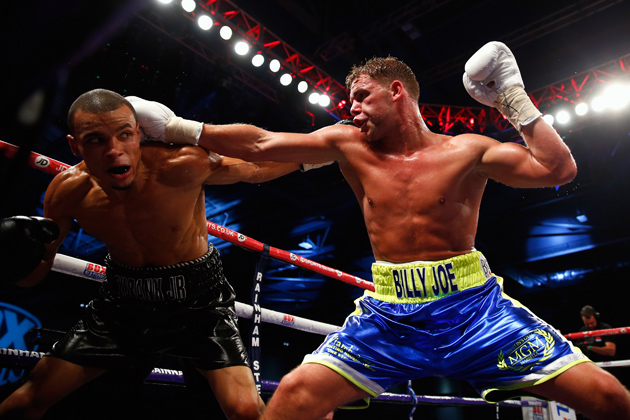 Former WBO world super middleweight champion Chris Eubank recently claimed his son, Chris Eubank Jr., was a hybrid of Sugar Ray Leonard, Mike Tyson and Floyd Mayweather. He was better than Gennady Golovkin and the most dangerous young man on the planet.

But he is also inexperienced and raw and he paid for those failings this evening at the ExCel Arena, London, when canny southpaw and 2008 Olympian Billy Joe Saunders claimed a split-decision victory over him in defense of his British, Commonwealth and European middleweight titles.

Eubank Jr., 25, had won 18 straight since turning professional in 2011, but had never previously gone beyond eight rounds, nor had he defeated anyone close to Saunders’ calibre. As such, the champion, the man with the better pedigree, was able to quickly claim center ring and dictate a slow-paced affair behind his southpaw right jab and the occasional left cross. He found his rhythm immediately. He looked the boss.

Eubank, meanwhile, chose to slowly circle the ring, pose and then initiate the occasional scruffy raid. It was a far cry from his typically aggressive, front foot, all-action style. Perhaps he was saving energy for the second half of the fight, only too aware of the fact he’d never before gone beyond eight rounds, or perhaps he simply found Saunders a tough puzzle to figure out in the early running. Whatever the reason, most believed Saunders swept the opening three rounds.

Urgency found its way to Eubank’s limbs in the subsequent rounds, though, and his raids became less forced and predictable and now owed more to sheer athleticism and explosiveness. He’d catch Saunders unaware with sudden, jarring uppercuts and clusters of quick punches inside. Hard and hurtful. Saunders, also 25, matched him punch for punch, of course, but there seemed potential success for Eubank whenever he managed to rough-house the champion and make it a messy, uncultured affair.

Still, when distance was created, Saunders utilised his better jab and superior judgement of distance. He’d step in with the shot and then step out again, just quick enough to evade Eubank’s attempted counters, and also never let Eubank manhandle him in close, despite the challenger’s frequent attempts to do so. It was an important message sent; it let it be known he wouldn’t acquiesce or be bullied by his more physical foe. Saunders, to his credit, remained composed at all times.

Saying that, though, there wasn’t much room for composure in the second half of the fight. Gone was the nervous energy running through both and gone too were the sprightly legs and jittery movements that dominated the first six rounds. Now both middleweights seemed content to fight up close, swinging recklessly in the hope of stumbling upon a fight-changing moment. Eubank’s work was often flashier, and his uppercuts were eye-catching, but Saunders always made a point of answering back and took advantage of Eubank’s agricultural approach with a number of stiff counter right jabs.

If the first half of the fight belonged to Saunders and his measured leads, the second half of the fight was more a tale of Eubank’s need to let his hands go and his desperate attempts to hurt Saunders with consecutive uppercuts. Time and time again that particular shot split the southpaw’s guard and crashed against his chin, but never once did the traveller budge or so much as blink. Safe to say his chin passed the test. He also showed much in the way of grit and stamina down the stretch, too, as Eubank came on strong and he matched him every step of the way.

Ultimately, it was this experience over 12 rounds, this knowledge of how to buy time and spoil when necessary, and a controlling and consistent right jab which allowed Saunders to pocket enough of the rounds – especially early – to walk away with a split-decision victory when all was said and done. Scorecards read 115-114 and 115-113 in favour of Saunders, with one discerning vote of 116-113 for Eubank Jr.

The champion deservedly remains in possession of his three belts, while the beaten challenger has at least now proven something in his 19-bout pro career. He’s proven that he’s no Mayweather or Leonard or Golovkin or even a Chris Eubank. Instead, he’s Chris Eubank Jr., and signs tonight suggest he may turn into one hell of a fighter.