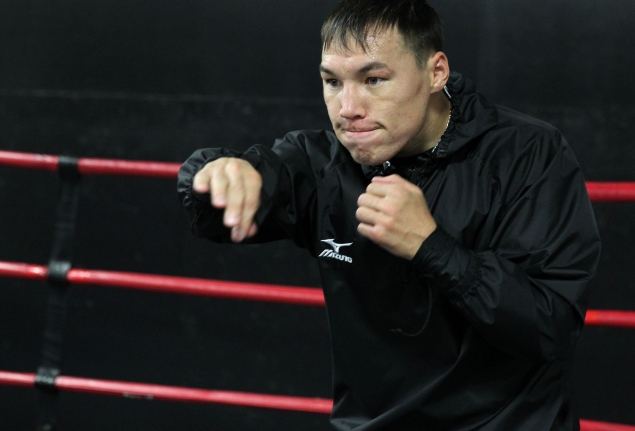 It was a grotesque mismatch on paper and played out exactly as many assumed.

Ruslan Provodnikov throttled faded former lightweight champion Jose Luis Castillo and scored a fifth-round TKO in front of a delighted hometown crowd in Luzhniki, Moscow. It was Provodnikov’s first fight in Moscow since 2011 and the 30-year-old pressure fighter wanted to rinse the taste from his split decision loss to Chris Algieri out of his mouth. But his opponent was little more than a recognizable name to pepper his resume. More importantly, unlike the slick boxing Algieri, Castillo would come to fight, no matter the cost

It didn’t take long for Provodnikov (24-3, 17 knockouts) to impose his will on the 40-year-old veteran whose best years are clearly behind him. The Siberian Rocky pressed forward from the opening bell and landed power punches almost at will as Castillo did his best to avoid the onslaught but repeatedly found his back on the ropes.

After being rocked by a straight right hand at the end of the third, the prideful Castillo opened Round 4 intent to engage. However, Provodnikov put on a power punching display that saw him repeatedly spear the battle worn Castillo with left hooks and combinations.

By the start of Round 5, it was clear that Provodnikov’s intentions had nothing to do with carrying Castillo through the scheduled 12-round junior welterweight bout as he continuously pelted the man who nearly gave Floyd Mayweather Jr. his first loss in 2002 with a menacing variety of power shots. Castillo tried to muster up the strength to counter but was ripped with a staggering combination that sent him to a knee. Although the Mexican was able to pull himself off of the canvas, the look in his eyes suggested that he needed a way out and Provodnikov helped him find one with yet another barrage capped off by a thudding left hook that sent Castillo staggering into the corner. The referee had seen enough and saved Castillo from further punishment as the contingency at the Luzhniki GCKZ “Russia” Arena in Moscow roared enthusiastically for their hero.

It was little more than an exhibition that Provodnikov’s handlers hope will assist in boosting his ego and getting the Russian from Beryozovo’s career back on track.

As for Castillo – who fell to 66-12-1 – it is certainly time to call it a career. There’s nothing left to do for a fighter who will be remembered as the man who pushed Mayweather to the limit and gave boxing fans a scintillating war with the late Diego Corrales that will forever live on highlight reels.

In a fight that was billed as a five-round “special attraction” that could only happen in Russia, 62-year-old Mickey Rourke once again exchanged a movie script for a pair of boxing gloves and returned to the ring for the first time in two decades with a second-round TKO over 29-year-old Elliot Seymour.

The fight was a questionable one considering Rourke’s age and the fact that his opponent entered the ring holding a 1-9 record, with the win coming in his second professional bout nearly five years ago. Nevertheless, the fight was all about the actor who had a short stint as a pro boxer from 1991 to 1994 and held a 6-0-2 record before deciding that boxing wasn’t for him and returned to acting.

After putting together some impressive performances in films such as The Wrestler, Sin City and Iron Man 2, Rourke decided to give boxing another try. He certainly looked the part as his body was well chiseled for a man of his age. The question was whether Rourke’s reactions would keep him from getting hurt inside of the squared circle. But Rourke did as he pleased as Seymour offered little pressure from the opening bell and allowed the former amateur boxer to do as he pleased. A well-hidden left hook whacked Seymour on the side of the head and, with no return fire, set the tone for the fight. The second round was no different from the first as Seymour would follow Rourke around the ring but did next to nothing as the actor found his range and sunk a right hook to the body of Seymour (which looked to land squarely on the hip) and sent him to the canvas. Seymour would get back to his feet but promptly waltzed into a pair of slow moving left hooks to the body that dropped him for good.

Hopefully, Rourke is happy with his return to the ring and won’t need to put his health at risk again.