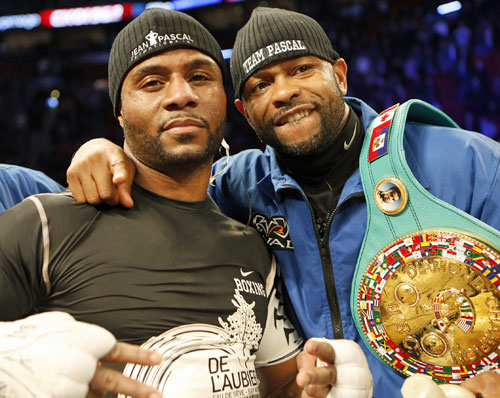 Jean Pascal has a new nickname for RING/WBC light heavyweight champion Adonis Stevenson, whom he believes has been avoiding a potential all-Canadian clash between the two.

A former RING champion himself who is the WBC’s mandatory challenger to face Stevenson (24-1, 20 knockouts), Pascal (29-2-1, 17 KOs) calls his countryman “Aducknis Chickenson,” his way of calling the 37-year-old southpaw a coward for supposedly ducking Pascal.

“I don’t see why he’s hiding from me because the fans really want this fight. So in fighting me, the television will be there; everyone will be there,” said Pascal, 32, who, like Stevenson, is of Haitian descent.

“You beat me, you become the king of the country and also you become a mega-star in Quebec. So why is he hiding like that? He’s just scared. He just don’t want to lose that belt.”

Stevenson is slated for a Dec. 19 date with Russian Dmitry Sukhotsky in Quebec City and Pascal, a fight with Roberto Feliciano Bolonti on Dec. 6 at Bell Centre in Montreal. The Bell Centre has also been placed on hold on for a potential April 4 showdown between Stevenson and Pascal, according to Stevenson’s promoter, Yvon Michel.

In the meantime, Pascal is also being considered for a potential March bout with Sergey Kovalev (26-0-1, 23 KOs), who is coming off an HBO-televised unanimous decision that added Bernard Hopkins’ IBF and WBA titles to his WBO belt on Nov. 8.

Pascal spoke to RingTV.com about his future in the following Q&A.

RingTV.com: Your thoughts on Kovalev’s victory over Hopkins?

Jean Pascal: The reason for Bernard Hopkins’ loss was very simple: I think that he wasn’t ready for Kovalev because of his jab but at the same time, Bernard Hopkins showed his age at 49 almost 50 years old.

But like I said, at the same time, Hopkins showed his age. Also yes, I lost to him when he was 46 but there is a big difference between then and now, when you’re 46 and then you’re 49.

That’s almost four years difference and it’s not like when you’re in your 20s. Being in your 40s, that’s a big, big difference. So to me, that was Hopkins showing his age.

JP: My goal is to regain a world title, so Kovalev and Aducknis Chickenson are the best at good options. But right now, I’m focusing on Roberto Bolonti for my next upcoming fight next week Dec 6 because if I don’t have a ‘W,’ I won’t a have a shot for a world title next year.

RingTV.com: Do you think that Stevenson could lose his next fight?

RingTV.com: Will Roy Jones Jr. be your trainer for this fight?

JP: Yes, he will. Roy has been in China and he’s supposed to be in town later this week, like, Thursday. So for now, I’ve been training with Mark Ramsey.

RingTV.com: How much of an adjustment will it be for you to re-focus on Bolonti rather than Donovan George?

JP: It’s not going to be a major adjustment for me. Donovan George and Roberto Bolonti have a similar styles. It’s not the same style but very similar.

Also, my physical preparation is almost complete. I just have to do one or two days of work and then I’m going to slow it down and I’ll be ready.

As I said, they have a similar style, so it’s not going to be a major adjustment for me. The rest is just the mental preparation and a little bit of a different strategy. So I will definitely be ready to give a great show for my fans.”