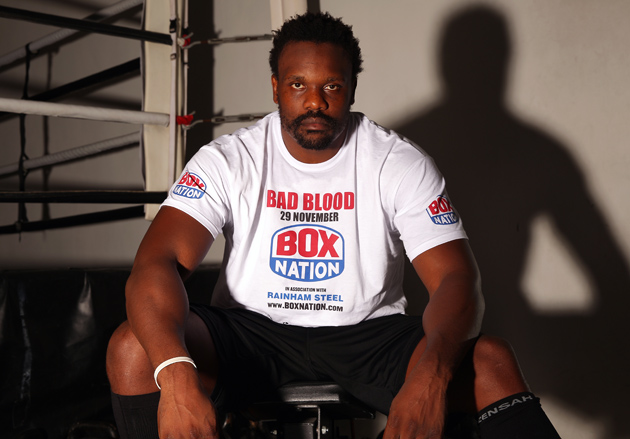 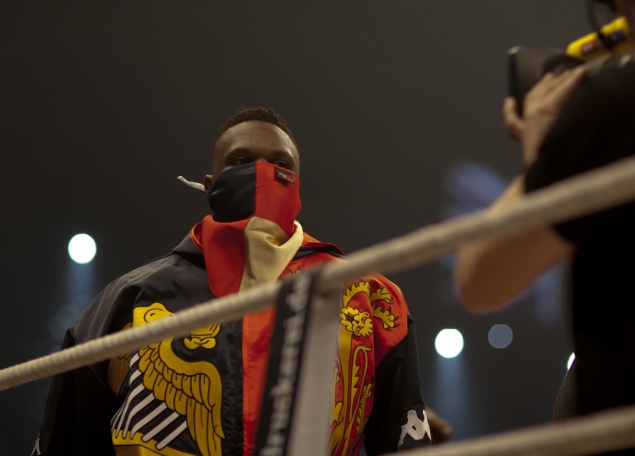 Dereck Chisora enters the ring for his fight with Vitali Klitschko. Chisora had the reputation as a loose cannon then, but has mellowed going into his Nov. 29 rematch with Tyson Fury, which he hopes will lead to a shot at Wladimir Klitschko.

The rematch between Dereck Chisora and Tyson Fury has been a never ending story. The controversial British heavies were originally scheduled to meet in July but Chisora suffered a fractured right hand in sparring and the money spinning bout collapsed. Finally, on Nov. 29, after months of repetitive build-up, they settle their differences in London, England.

“There are no complaints regarding my hand and I’m ready to go,” said Chisora who lost a unanimous decision to Fury, THE RING’s No. 4-rated heavyweight, in July 2011.

“I’m sharp and the timing of the rematch is so much better. The previous date had been difficult because the World Cup and Wimbledon were on, but everything has gone very well in terms of this promotion. I felt bad for Frank (Warren) and Tyson when the fight was postponed but my hand injury left me with no choice but to pull out. As it turns out, it’s been for the best.”

This ‘repeat or revenge’ domestic scrap is also a WBO final eliminator and there is a very good chance that the winner faces off against THE RING champion Wladimir Klitschko in the first half of 2015. The towering Ukrainian recently dispatched what many felt was his biggest threat in Kubrat Pulev and Chisora, who lost on points to brother Vitali in Feb 2012, was very impressed.

“I can honestly say that’s the best performance of Klitschko’s career,” said the Londoner in regards to what was an emphatic fifth-round knockout. “You want to see a heavyweight champion just go for it. Wladimir did what he had to do and had obviously studied Pulev. He knew how his opponent was going to attack and boxed a very effective fight.

“Klitschko versus the Chisora-Fury winner is the biggest fight out there. Everyone wants to see him in with the winner of me and Tyson. After Saturday we can look ahead but the only fight I’m interested in right now is Tyson Fury.”

In recent months Chisora (20-4, 13 knockouts) has shunned the controversial time bomb image that saw him temporarily lose his boxing license in 2012. The reigning European champion once brawled with David Haye during a press conference, slapped Vitali Klitschko during a weigh-in, and spat water in the face of Wladimir, who was working as part of his brother’s corner team.

Turned over a new leaf? The forward gears only slugger is reading from a different book.

Chisora said, “If you look at fights from the golden era there wasn’t the same level of disrespect that you get now. There was no swearing on live television and things like that. Actually there were champions who used to shake hands and hang out but, when it came to fight time, you got a fight.

“We’ve decided to promote this fight a different way. We want the public to tune in to see us perform in the ring and not because we’ve been arguing. That’s the route we’re taking now, we want to give boxing a better image.”

So Chisora is working on becoming a role model and cleaning up a sport which will forever be tarnished and his efforts are indeed commendable.

Mending reputations aside, what does “Del Boy” bring to the table in a rematch with Tyson Fury who is favored to defeat him for a second time this weekend?

“We’re looking to weigh in between 235-240 pounds and enter the ring at 245,” said Chisora, who has looked in top condition for his last five fights. “That’s the plan and I’ll box my fight from the start. There’s no point talking tactics right now because the fighting starts when the bell rings.

“I won’t give you any predictions but be sure to tune because you don’t want to miss this.”