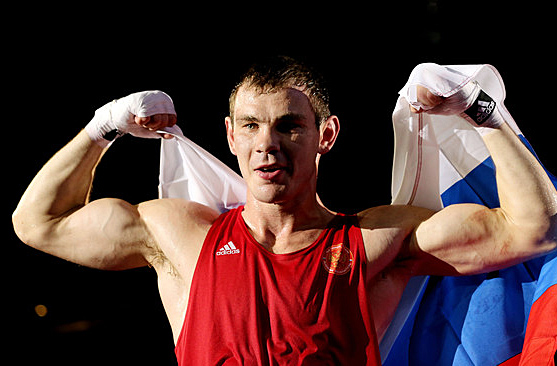 Light heavyweight prospect and Olympic gold medalist Egor Mekhontsev heads back to Russia for his first pro fight in his homeland on Friday when he meets veteran Joey Vegas.

Mekhontsev (6-0, 6 knockouts) turned professional a year ago, leaving a trail of destruction his wake. The opportunity to fight in front of his countrymen is something he’s eager to do.

“I’m very happy to be fighting in my home country in Russia, to fight for my fans,” a respectful Mekhontsev told RingTV.com through his manager Vadim Kornilov. “Many people know me here from my amateur career accomplishments, and they are waiting to see my fight.”

It will be the sixth professional fight of a busy year for the recently turned 30 year old, once a highly decorated amateur. Highlights of his amateur career include winning gold at the London Olympic Games and gold at the 2009 World Championships. He was also a two-time European Champion in the amateur ranks.

The heavy handed southpaw intends to progress quickly because of his extensive amateur background.

“There are some good boxers in (the) light heavyweight division and I know I am at the level to fight them, I can’t wait to get to the top of the division,” he said.

Anson Wainwright – What is your thoughts on fighting Vegas?
Egor Mekhontsev – My thoughts are always the same: it’s my job, I want to perform my job well, and come out with a victory.

I would like to thank the company World of Boxing and Andrei Ryabinskiy, Top Rank, and Channel 2 Russia for supporting me and my first professional appearance in Russia.


AW – Have you found any big changes since turning pro?
EM – I always try to find changes in my work. I always try to become better with every fight and year to year. I think that when you look for changes to the better it will always take you higher in my career.

AW – Who are the members of your team?
EM – I train in the Wild Card Boxing Club in Los Angeles. The members of my team are my father and trainer Leonid Mekhontsev, manager Vadim Kornilov, co-manager Oleg Kovalchuk and promoter Bob Arum (Top Rank Promotions).

AW – You’re from Asbest on the eastern slope of the Ural Mountains. What was it like for you growing up?
EM – Growing up there was great. I had a wonderful childhood. When I was a kid I went to the boxing gym to watch my older brother training. My father trained him, so basically they got me involved.

AW – You were a very successful amateur. You won gold at the 2012 Olympics, gold at the 2009 World Championship; what would you say of those achievements and experiences?
EM – It is very rewarding experience that not everyone gets. I think that I deserve what I was able to achieve as I worked really hard.

AW – Tell us about the rest of your amateur career. How many national titles, European titles? What current pros did you beat and also what was your final record?
EM – I was three times champion of Russia, two times champion of Europe. Also I have a bronze medal from the World Championship. After my record reached 300 (fights), I stopped counting.

AW – Why did you decide to turn pro now after so many years in the amateur game? Tell us about how you went about going pro?
EM – First, in amateur boxing there has been many changes that are not making it better, but worst, in my opinion… Secondly, it’s the desire to make real money.

AW – What are your goals in boxing?
EM – To become a world champion and earn a lot of money as the reward for all the hard work I put in.

AW – Away from boxing tell us about your life, your hobbies, interests, family, etc.
EM – I have a wife and a daughter. My family is always with me and always supports me in my career. In Russia I like to go fishing, I like to be outdoors a lot.

AW – Lastly do you have a message for the light heavyweight division?
EM – I don’t like to do a lot of talking about what I will do. I’d much rather present my message with my fists in the ring.