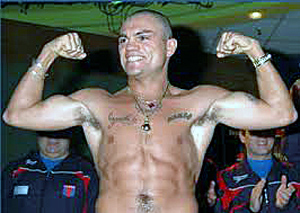 BUENOS AIRES – Almost five years after causing an accident that killed a pregnant woman after running a red light in his SUV while allegedly driving under the influence, 38-year-old former WBO 130-pound titleholder Jorge Barrios is finally headed to prison for three and a half years.

The fighter, nicknamed “The Hiena,” was placed in custody by local law enforcement while at his promoter Mario Arano’s training facility in the town of Junin, where fellow former champ Lucas Matthysse also trains.

Barrios was convicted of “manslaughter and grievous bodily harm” and was originally sentenced to four years, but since he spent a total of 22 days in custody after the incident, he will only have to serve three years and seven months (every day in custody without a firm sentence counts as double in Argentina).

He successfully requested not to be incarcerated while all the possible appeals in his case were finalized, being able to remain in home detention for almost five years. Barrios will be eligible for furlough after serving half of his sentence.

In January of 2010, Barrios (50-4-1, 35 KO) was vacationing in the town of Mar Del Plata when he left a party allegedly inebriated and drove his BMW X5 at high speed. He failed to stop for a red light and hit a small Fiat 147 car that was already fully stopped. This car then slid on the road and ran over four people waiting to cross the street. Yamila Gonzalez, a 20-year-old woman who was six months pregnant, was the only fatal victim in that group.

Barrios fled the scene, hitting a Ford F100 truck in his escape, and after fleeing this scene as well he disappeared for six hours before turning himself in to the police. He was in jail for 22 days and was released on a $50,000 (U.S. dollars) bail.

“Whatever he is suffering, he had it coming,” said Graciela Morales, mother of Yamila, the deceased woman, during a TV interview. “He never apologized for what he did. May God forgive him.”

Barrios had won the vacant WBO belt in April 2005, in a bout with Mike Anchondo, who had lost his title on the scales the day before. Oddly enough, Barrios ended up forfeiting his title when he failed to make weight for a defense against Joan Guzman in September 2006.

Barrios only had one fight after the tragic incident in question, defeating Wilson Alcorro in October 2010.