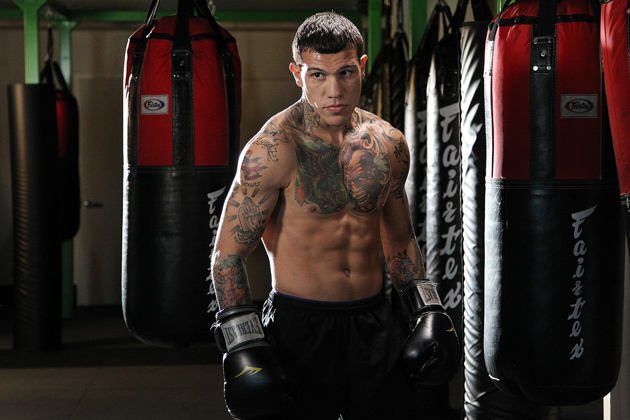 Gabriel Rosado bleeds for his fans.

Rosado is winless against unbeaten boxers over the course of his past four bouts, being bloodied and stopped in two middleweight title bout challenges, suffering a disputed split decision loss-turned-no-decision in a third bout, and losing by a wide unanimous decision in the fourth.

But even in defeat, the Philadelphia native said that he drew strength and inspiration from an unwavering and loyal fan base.

“It definitely helps when I went through some tough losses throughout my career, the fans definitely speak up, and they definitely show me love on social media,” Rosado said during a Monday media conference call.

“It’s been mostly more love than it has been negativity. So it helps me and definitely motivates me. The fans definitely keep me relevant because they speak up and they speak their mind, so I definitely appreciate that and it makes me want to get back into the gym and to work harder.”

Rosado (21-8, 13 knockouts) will return to action against hard-punching David Lemieux (32-2, 30 KOs) in the middleweight main event of an HBO-televised tripleheader on Dec. 6 at Barclays Center in Brooklyn, New York.

“I’ve never had a big manager, and I’ve never had a big promoter, and I’ve pretty much worked odd jobs during my entire career, having to work the graveyard shifts on jobs while I’m training for fights. So I’m kind of like the blue collar guy that the fans relate to. They’re pulling for me because they can relate to me on that level. I stay humble, and I don’t get big-headed, and I remember where I come from. That’s why the fans relate to me.”

In January 2013, Rosado, 28, lost by a bloody seventh-round stoppage to WBA middleweight titleholder Gennady Golovkin, ending his run of seven straight victories, five of them by knockout. In May 2013, Rosado lost a split decision in to J’Leon Love that became the no-decision after Love failed his post-fight drug examination.

In October 2013, Rosado rose from a second-round knockdown and was very much in contention during a 10th-round TKO loss to then-WBO middleweight titleholder Peter Quillin, a fight that was halted due to a severe cut over Rosado’s left eyelid.

“I feel that I’ve had some controversial decisions, and I think that the fans spoke up loudly when I fought J’Leon Love, and they all felt that was a fight that I won. With Peter Quillin, I felt that I was finally on the verge of getting the knockout, and I felt like I had the momentum on my side,” said Rosado.

“That was a fight that the fans thought I was going to win, and the commentators all had me up on the cards when that fight got stopped in the championship rounds. I think that they’re losses that the people say that he was winning on the commentators’ scorecards, and they were not fights that I flat out lost.”

After three fights as a 160-pounder, Rosado returned to 154 in January. But Rosado was cut, yet again, over the left eye during a one-sided unanimous decision loss to Jermell Charlo.

“I flat out lost to Charlo. That was a fight that a lot of that was because that was a fight where I thought that I could make 154 again, and I killed myself to make the weight. But when it comes to middleweight, the only guy that I think beat me in the middleweight division as Triple G [Golovkin,]” said Rosado.

“But when you look at the Love fight and the Peter Quillin fight, those are fights that the fans thought that I was winning, and so did I. The fans know better, and you can’t fool the fans, and, that’s why I think I’m getting this fight. I don’t think that he’s the favorite in this fight…People know what I bring to the table.”

Having amicably parted with longtime trainer, Billy Briscoe, Rosado will face Lemieux in his first bout under trainer Jesse Reid (Rosado had the veteran boxing guru in his corner when he recently participated in the “Big Knockout Boxing” combat sport, knocking out Bryan Vera).

Rosado said that he is training at Reid’s facility in Burbank, Calif.

“So when it’s time for training camp, I’m doing my training in Los Angeles…I’m having a great camp, this is the last week of sparring, and I’m ready to roll. I think that right now, I’m training really hard,” said Rosado. “Regardless of the bad decisions, or whatever, I’m think that a lot of that had to do with me needing to be a lot more disciplined and focused, and I think that’s what I’m doing right now.”

But so is Lemieux, 25, who has been on a role of late. In his last fight in May, Lemieux blasted former title challenger Fernando Guerrero, dropping the southpaw four times en route to a sensational third-round stoppage.

The victory was the seventh straight for Lemieux during a run that has included six knockouts since being stopped in the seventh round by Marco Antonio Rubio and losing a majority decision to Joachim Alcine in successive bouts in April and December 2011.

“I think that a lot has changed in my life and in my head, and I know that people are starting to know slowly and surely that I have changed, also, especially if they saw my last fight against Fernando Guerrero. They saw that I was in tremendous shape, and that I was in the best physical shape of my life. I was stronger, and if you watch closely, you can see not just the punches, but a good boxer,” said Lemieux.

“We’re mixing everything up, and people think that if you see David Lemieux, that he’s good for four rounds…They’re going to have a surprise because I’m bringing a lot of tools to the table. I’m not going to be just a good puncher, but a very good boxer and I’m going to be strong to the end. From the first to the 12th, whatever it needs to be.”

Although the stakes are high for both Rosado and Lemieux, Golden Boy matchmaker, Robert Diaz dismissed the notion that their clash represents a crossroads situation for either boxer.

“I think that that’s what keeps boxing alive. We’re too quick to write of a guy because he lost a fight. As long as it’s a great fight, the fighters don’t lose, the fans win, and boxing wins. This is a fight that is going to answer a lot of questions…It’s a fight where I expect fireworks, and I’m very excited about this fight.”

Note: In honor of Black Friday, Golden Boy Promotions is offering a deal for tickets to the Lemieux-Rosado card starting at $15.00 at Barclays Center. In addition, there is a 2-for-1 package in place comprising all tickets between $25 and $80.