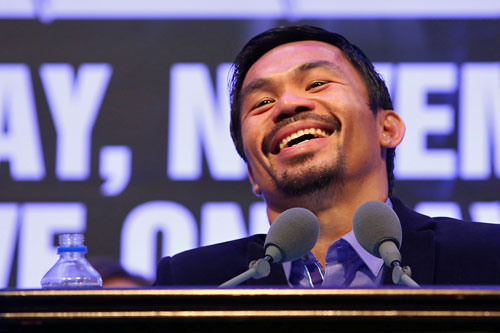 Manny Pacquiao: We can point out with some justification that Pacquiao isn’t quite the fighter he was a few years ago. That said, he proved again against Chris Algieri that a fighter of the Filipino’s rare ability at 80 or 90 percent is still far better than almost any other boxer in the business. Algieri isn’t a special fighter but he’s a good, smart, tough one. And Pacquiao thrashed him, putting him down six times (although two of the knockdowns were really slips) and leaving with a near-shutout decision. He did it by patiently acclimating himself to Algieri’s difficult style and then seizing opportunities when they presented themselves, which led to all the knockdowns. That left hand that put Algieri on his back in the ninth round was reminiscent of Pacquiao’s knockout of Ricky Hatton. Sensational. That doesn’t mean I believe Pacquiao (57-5-2, 38 knockouts) is or really ever was a huge puncher, though. He has heavy punches, which earn his opponents’ respect very quickly, but he never was a one-punch knockout artist. And that doesn’t really matter. Bottom line: He’ll continue to beat top-tier opponents (such as Tim Bradley) and annihilate lesser foes (such as Algieri) in the foreseeable future. What’s next? Maybe Danny Garcia. That’s an interesting matchup but the result would resemble what we saw on Saturday.

Chris Algieri: This might sound strange given the six knockdowns and the 16- and 18-point disparities on the official scorecards but Algieri (20-1, 8 KOs) probably did about as well as he could’ve. I thought he fought too cautiously, throwing too few meaningful punches to give himself a chance to win. The alternative wouldn’t have worked, though. Algieri almost certainly wouldn’t have survived had he engaged Pacquiao much more than he did. His mission was more or less hopeless. He was grossly overmatched. And I’m not sure about Algieri’s game plan going in. They were waiting for Pacquiao to get tired? Seems like a reach. And they thought he could stop Pacquiao? OK, I get it. Juan Manuel Marquez demonstrated that it can be done. But c’mon. That notion falls just short of fantasy. If I were Algieri’s trainer – and I fully acknowledge that it’s easier to judge in retrospect – I wouldn’t have shown Pacquiao quite as much respect. I would’ve had Algieri take the fight to Pacquiao a little bit more than he did, popping that jab and enough right hands to get the attention of the judges. Yes, that would’ve been risky. It also might’ve made for a more competitive fight as long as it lasted. Look for Algieri to find more success against more-mortal opponents.

Tim Lane, the trainer of Algieri, made a regrettable prediction in an interview with Max Kellerman during the ninth round of a fight Pacquiao was thoroughly dominating. He said for the world to hear that “he’s (Algieri) going to put him (Pacquiao) to sleep here in a few minutes.” A few seconds later, Pacquiao landed the biggest punch of the fight, a straight left that put Algieri on his back and punctuated his dominating performance. Let’s not be too hard on Lane, who came off as foolhardy. He believed in his fighter until the bitter end. There’s something admirable about that. ÔÇª The two Algieri slips that were ruled knockdowns illustrate the perfect situation in which to use video review. An official could’ve determined between rounds that Algieri fell as a result of water on the canvas and given him back two points. ÔÇª The pay-per-view card wasn’t strong, as three of the four televised fights were predictable mismatches and the fourth (Jessie Vargas–Antonio DeMarco) was one-sided. That wasn’t worth the $69.99 for the high-definition broadcast. I think the choice of Algieri as Pacquiao’s opponent was the main problem. I understand that he earned it by beating Ruslan Provodnikov, who probably would’ve fought Pacquiao had he beaten Algieri. That said, I don’t think many knowledgeable observers thought this would be an entertaining fight. ÔÇª

Vargas (26-0, 9 KOs) turned in a solid performance under new trainer Roy Jones Jr., winning 116-112 on all three cards in a junior welterweight fight. The Las Vegan apparently now is a candidate to fight Pacquiao. Bad idea. I think he would make for an entertaining fight but it’s clear he is nowhere in Pacquiao’s league. Pacquiao’s opponents should have both a fighting spirit and the ability to make good use of it. I like Garcia or Lucas Matthysse among 140-pounders as potential opponents for Pacquiao assuming he doesn’t fight Floyd Mayweather Jr., although I don’t give either much of a chance against him. ÔÇª Vasyl Lomachenko (3-1, 1 KO) proved on the Pacquiao-Algieri card that he can win fights one-handed. The two-time Olympic champion shut out Chonlatarn Piriyapinyo (52-2, 33 KOs) even though he injured his left hand in the seventh round, after which he fought almost exclusively with his right. Lomachenko seems to have it all. I can’t wait to see him against the top fighters in and around the featherweight division, guys like Jhonny Gonzalez, Nicholas Walters, Abner Mares and Guillermo Rigondeaux. ÔÇª

I was impressed with the progress and fighting spirit Zou Shiming (6-0, 1 KO) demonstrated against a game Kwanpichit OnesongchaiGym (27-1-2, 12 KOs) on the Pacquiao-Algieri card. He boxed well overall and dazzled the home-country fans with thrilling combinations, although he also had periods when he did very little. I believe more than ever that he can be an attraction, although his handlers need to keep him away from Roman Gonzalez. Gonzalez (41-0, 35 KOs) stopped Rocky Fuentes (35-8-2, 20 KOs) in six rounds to retain his RING and WBC flyweight titles, his seventh consecutive knockout. ÔÇª It was a busy day Saturday beyond Macau. The card in Liverpool, England, featured no less than seven bouts involving important fighters. Tony Bellew (23-2-1, 14 KOs) defeated Nathan Cleverly (28-2, 14 KOs) by a split decision, avenging a majority-decision loss in 2011. That seems to set up a rubber match. Beyond that, James DeGale, Scott Quigg, Callum Smith, Jamie McDonnell, George Groves and Anthony Joshua easily won their fights in what was more a showcase of U.K. talent than a competitive card.