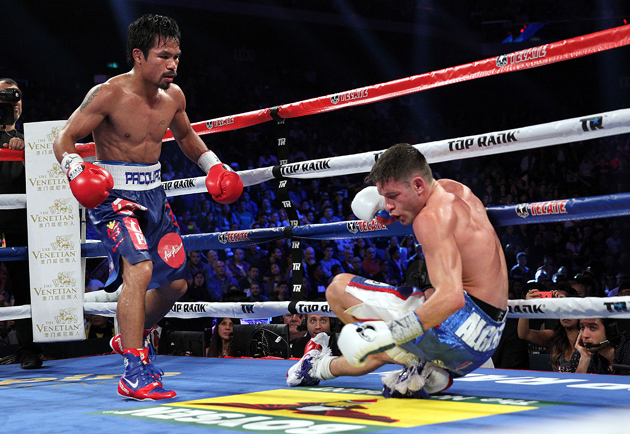 The six knockdowns – one in the second, two in the sixth, two in the ninth and one in the 10th – were an indication that Pacquiao brought his punching into the ring but Algieri had the guile and toughness to survive.

What Algieri didn’t have was the tools to win the fight. He fought defensively from beginning to end, not throwing enough punches to win rounds or keep Pacquiao off of him. Pacquiao pursued Algieri patiently, waiting for opportunities that ultimately presented themselves.

The most memorable knockdown came in the ninth, when a straight right knocked Algieri on his back and hurt him. Algieri got up but later took a knee to avoid more punishment, although he somehow made it to the end of the round.

Algieri needed a knockout in the final rounds to salvage the fight but had neither the stomach to stand toe to toe with Pacquiao nor the power to hurt him.

Pacquiao (57-5-2, 38 knockouts) has now three consecutive fights since he was knocked out by Juan Manuel Marquez in 2012. Algieri (20-1, 8 KOs) was coming off a sensational decision over Ruslan Provodnikov to win the WBO junior welterweight title in June, which earned him a shot at Pacquiao.

In the end, he didn’t do much with the opportunity.