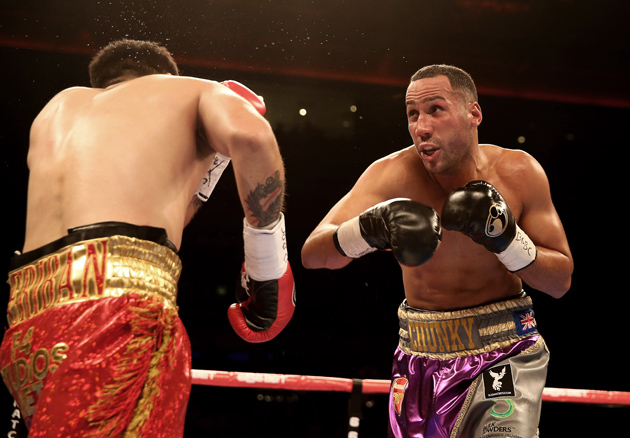 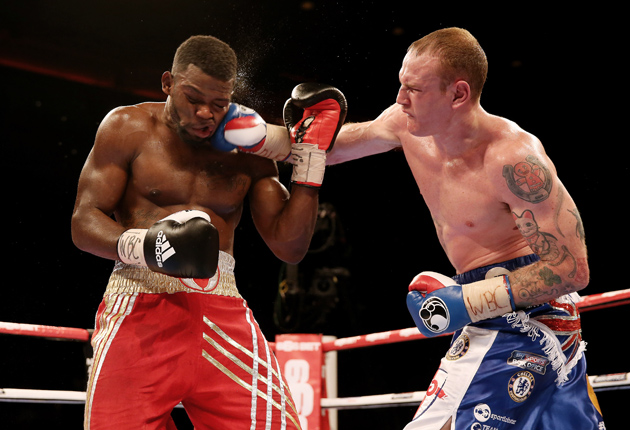 George Groves (right) lands a right hand that led to a seventh-round stoppage of Denis Douglin at Liverpool Echo Arena on Nov. 22, 2014 in Liverpool, England. Photo by Scott Heavey/Getty Images

LIVERPOOL, England – It was a fight he didn’t need to take, but James DeGale’s date with Marco Antonio Periban was certainly one he needed to win, and the IBF number one ranked super-middleweight, next in line for a shot at Carl Froch’s title, duly delivered with a third-round stoppage of the Mexican in front of a packed Echo Arena crowd.

Periban, never before stopped but appearing fleshy around the midriff, presented an open target for much of the opening round and allowed Londoner DeGale to quickly impose himself and settle into the contest. This meant DeGale neglected his jab, presumably because it wasn’t required, and instead loaded up on a number of lead left hands and right hooks from his southpaw stance, thrown viciously whenever Periban found himself trapped on the ropes. Even when switching stances in round two, DeGale continued to exploit the holes in Periban’s defence with a number of right crosses.

Still, as they entered the third round, it looked as if Periban was at least starting to warm into things. He was freely letting his hands go and remaining active. But a stiff DeGale left hand suddenly rocked the Mexico City-native while his back was against the ropes and a further flurry sent him to the floor for the first time in the fight.

It was then that referee Howard Foster, infamous for his role in the first fight between Carl Froch and George Groves, decided Periban was in no fit state to continue and waved the bout over at 0:30 of round three. Most at ringside agreed it was another ill-timed one, that Periban should have been given a chance to carry on, but DeGale couldn’t care less. He remains on course to draw the sting of ‘The Cobra’ in 2015.

George Groves was up next in Liverpool and he too had to protect his mandatory status, this time with the WBC, by avoiding a potential banana skin in the form of game American Denis Douglin. And he did just that, overcoming a tricky start to slowly reveal his repertoire and close the show on his New Jersey foe in round seven.

Unheralded and mostly unknown beforehand, Douglin, 17-4 (10 KOs), more than played his part in the contest, especially during the opening three rounds when he caught Groves napping with counter right hooks from his southpaw stance. He also made a point of chucking hard to the body whenever presented with the chance to do so. Subsequently, Groves, ordinarily a master of the jab and right hand, appeared stifled by his opponent’s nard-nosed approach to the task and even found himself nailed at the bell to end round three.

Nevertheless, what separates world-class fighters from those below is the ability to adjust mid-fight and Groves, now bloodied, did just that in round four. He used his jab more selectively, thus reducing Douglin’s opening for his own counter right hook, and began to place a greater emphasis on his straight right hand through the middle, the go-to shot against any southpaw. This punch continued to find a home for Groves in the fifth and sixth rounds and he became increasingly more spiteful with it.

In the end, though, it would be a right uppercut, thrown as the pair traded inside, that scrambled Douglin’s senses, dropped him and ultimately ended his threat. He got up, of course, and appeared willing to continue, perhaps in the hope of clinching his way to the bell, but Groves was unrelenting in his pursuit of the finish and eventually pinned Douglin in his own corner. From there he buzzed him with a left hook and wouldn’t let up until referee Victor Loughlin halted proceedings at 2:54 of round seven.

London’s Groves (21-2, 16 KOs) now waits for his mandated WBC title shot against champion Anthony Dirrell. Failing that, who wouldn’t like to see him become reacquainted with old rival James DeGale in 2015?

Finally, that expectant hush you hear inside Liverpool’s Echo Arena is the sound of a crowd waiting for heavyweight Anthony Joshua to detonate his right hand on the jaw of yet another hapless opponent. This evening it happened midway through round one and the unfortunate recipient was Reading’s Michael Sprott, a veteran of 64 professional contests, who took the shot flush and was then driven back towards his own corner under a further offering of savage rights. The first appeared definitive enough, but the others put the seal on a tenth straight knockout victory for Joshua, 10-0 (10 KOs), as Sprott was saved under fire at 1:26 of the very first round. It was Sprott’s second consecutive first-round knockout loss, but take nothing away from Joshua; when he hits them, they stay hit.